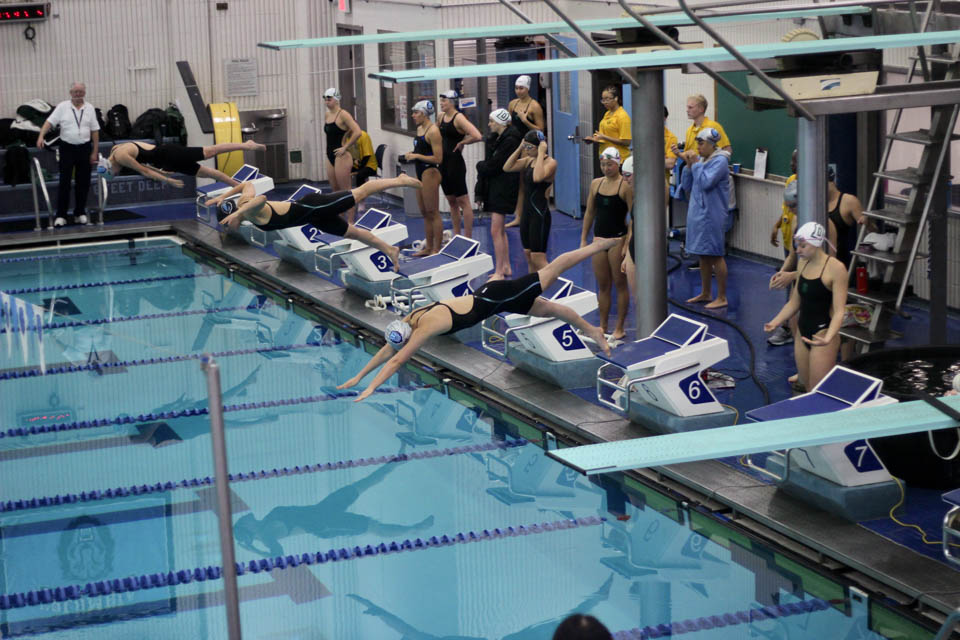 On Senior Day, women’s swimming and diving tops Dartmouth in its largest victory of the season.

Almost every part of women’s swimming and diving was firing on all cylinders on Saturday when Columbia (4-3, 4-3 Ivy) dismantled Dartmouth (2-7, 1-4 Ivy) 215-84 in its last home meet of the season. The contest against the Big Green also marked the last dual meet of eight seniors’ careers. The Light Blue flexed their muscles to honor those seniors, only dropping three events to Dartmouth the whole day.

The Lions’ dominance began on the diving platform, where Columbia took both the 3-meter and the 1-meter dive. Sophomore Briget Rosendahl shined in the 3-meter, where she came out victorious with a score of 285.45. First-year Livy Poulin then won the 1-meter dive with a 269.48, beating out Rosendahl by less than a full point.

After the Big Green scored consecutive event wins in the first half, the Lions quickly wrestled back control of the meet and didn’t look back on their way to their largest win of the year.

While Dartmouth was able to win the 1000- and 200-yard freestyle and bring the meet to its closest margin of 40-33, the Lions retaliated with consecutive 1-2-3 finishes in both the 100-yard backstroke and breaststroke, adding on to their opening victory in the 200-yard medley relay. Columbia also added 1-2-3 sweeps in the 200-yard backstroke and the 100-yard butterfly. Their five sweeps in one meet was the highest mark all season.

Head coach Diana Caskey was happy to see her group bounce back and overpower the Big Green after last week’s tough loss to No. 22 Princeton.

“We were really happy to send our seniors out on a high note, and it’s always a lot of fun to dominate a meet, especially the last meet and the last meet of some people’s careers,” Caskey said.

Senior Julia Samson cited the contribution from a wide number of swimmers as the catalyst for defeating Dartmouth, as 10 different Columbia swimmers won individual events.

“It was definitely a collective effort, and I feel like that’s been kind of a trend throughout the whole entire year of everyone putting their own work in, and it was great to see it all come full circle for our last meet,” Samson said.

Though the next event on the horizon for the eight departing seniors is the Ivy League Championships on Feb. 19, Samson, Scottie Berridge, Elisa Fang, Isabelle Jubin, Clare MacNamara, Audrey Richter, Helen Wojdylo, and Lisa Zhang all raced for the last time at the Percy Uris Natatorium on Saturday.

Caskey heaped praise on the seniors, emphasizing the group’s consistency in performance and numbers.

“They’ve been an incredibly dynamic group from start to finish, and the fact that they’ve stayed so solid in terms of numbers is really exciting, too,” Caskey said. “We’re gonna be quite a different team next year.”

Samson reflected on her four-year career, saying she would miss her team’s community the most.

“[It’s] an inevitable family, definitely. Being a part of the swim team has been a huge part of our identity here, and not only is it really special to be a student-athlete on campus but it’s really special to belong to a well-put-together team,” remarked Samson.

Wojdylo is ready to replicate her past success at the upcoming Ivy League Championships after winning the 100-yard breaststroke last season.

“I’m so happy to get back into the championship season and start resting and being able to go extremely fast and being ready to improve our place from last year,” Wojdylo said. “I think this team is stronger than ever seen before.”

The team will see action next at the Ivy League Championships, which take place in Providence, Rhode Island from Feb. 19 - 23.