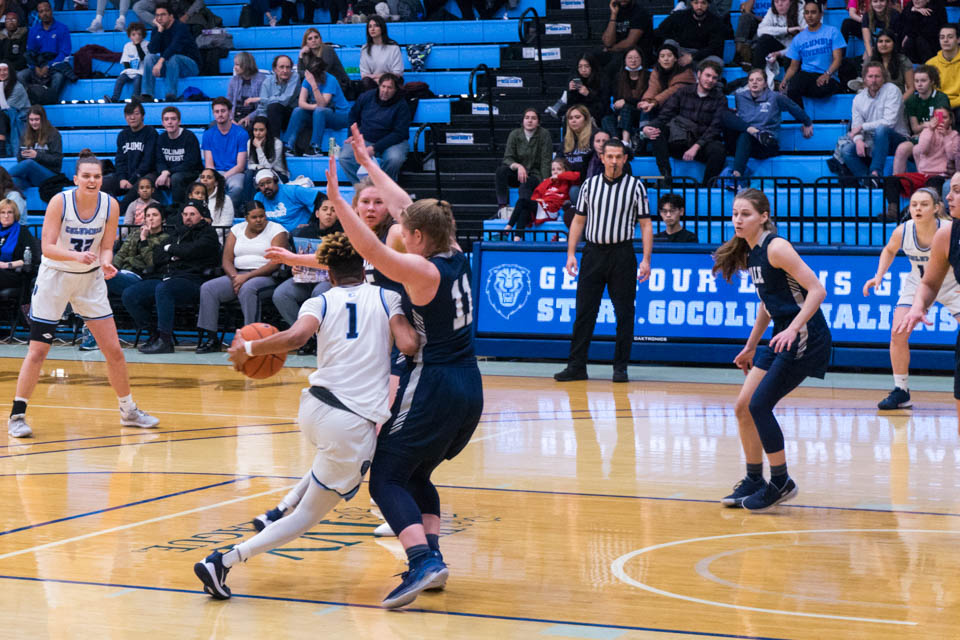 Durr recovered from cold night against Yale and led the team with 17 against Brown.

Women’s basketball marched into February at full steam after two nail-biters against Cornell, splitting the weekend. While the team was blown out by Yale 85-60, it flourished against Brown 74-60. The Lions (11-6, 2-2 Ivy) currently rank third in the league after playing the Ancient Eight’s top, the Bulldogs (14-3, Ivy 4-0), and the league’s bottom, the Bears (6-11, Ivy 0-4).

The team was in two separate worlds after each game: gloomy after Friday night, but animated after Saturday’s recovery. When asked if the 14-point victory was a good response to the previous night’s loss, first-year guard Abbey Hsu joked, “What do you think?”

“Obviously, yesterday was not the outcome that we wanted, but the great thing about an Ivy weekend is that we have another chance the next night,” sophomore forward Sienna Durr said. “I think we really came out and we played together on offense and defense, and we got the win.”

After their loss on Friday, however, the players were so frustrated with their effort that they barely had anything to say about the game. After losing to Cornell in overtime on Jan. 25, head coach Megan Griffith stressed that the team needed to continue playing with more toughness, but the Lions ultimately failed to match up well against the Bulldogs on Friday night, especially in the second half, during which the Lions lost by 22 points. Columbia, the team with the best perimeter defense in the Ivy League at that point, allowed Yale to make 13 triples out of 22 attempts, and the Bulldog’s Tori Andrew recorded a perfect 6-for-6 in three-point land.

Yale began the game with a 10-0 run before Columbia immediately responded with two threes, eventually tying the first quarter at 15 apiece. The first half was a level contest, with the teams going back and forth. The Lions were only down by three after 20 minutes of play and had a lead of five at the most, but the Bulldogs launched their second-half offense with another 11-0 run, and despite Griffith’s timeout, the game escaped the Lion’s grasp.

“[Yale] wanted it badly,” Griffith said. “And for us, we had zero response, and that was … the tale of the second half.”

Griffith reflected that the poor performance after halftime was due to a lack of faith in the team’s system and in itself. The Bulldogs went 76 percent from the field in the second half, which Griffith attributed to the Light Blue not taking pride in executing its plan and losing focus in keeping hands up or remembering when to switch on screens. She went on to say that her players started to panic in times of hardship, which is something that the young team must overcome. Although Griffith believed that the team’s performance was an outlier in relation to its usual aggressiveness, she made no excuses for its lackluster playing.

“When things are going poorly, people forget and they start trying to take things on their own, and the game becomes really selfish,” Griffith said. “The most selfish act of basketball is not to think, so when you don’t think, you don’t trust, you don’t talk, and you play within yourself. As soon as we saw some adversity … everyone was trying to be the hero; it’s like ‘we don’t need a hero, we need to be a team right now.’”

However, the Lions reappeared as the queens of the jungle on Saturday. Despite not being at their best offensively, the Light Blue held the Bears to 24 of 62 from the field and out-rebounded the Bears 50 to 26. At the half, Columbia grabbed 31 rebounds––more than the whole game on Friday––and in total the team had a 17-5 advantage in offensive rebounds, earning it 12 more chances to attack the basket.

The Lions dominated the paint and stepped up to the free-throw line 21 times, converting 18 points, whereas the Bears only had eight free throws, and none in the first half. Hsu scored 16 for Columbia, registering her seventh double-digit-scoring game in eight games. Durr bounced back from Friday’s zero-point performance and led the team with 17.

“That’s not my best shooting percentage for the night,” Durr said of her offense. “But I was really getting my energy from other parts of the game, so defensively I was really locked in, and I was just helping my teammates whenever I could. So when you’re going to get defensive stops, the offense is just going to come along.”

Looking ahead, the Lions will play back-to-back away games first at Penn, and then at Princeton next weekend. Tipoffs are at 7 p.m. on Feb. 7 and 5 p.m. on Feb. 8, respectively. The games will be broadcast on ESPN Plus.