In the battle of Senior Days, Columbia loses to Navy before hammering Dartmouth

In the battle of Senior Days, Columbia loses to Navy before hammering Dartmouth 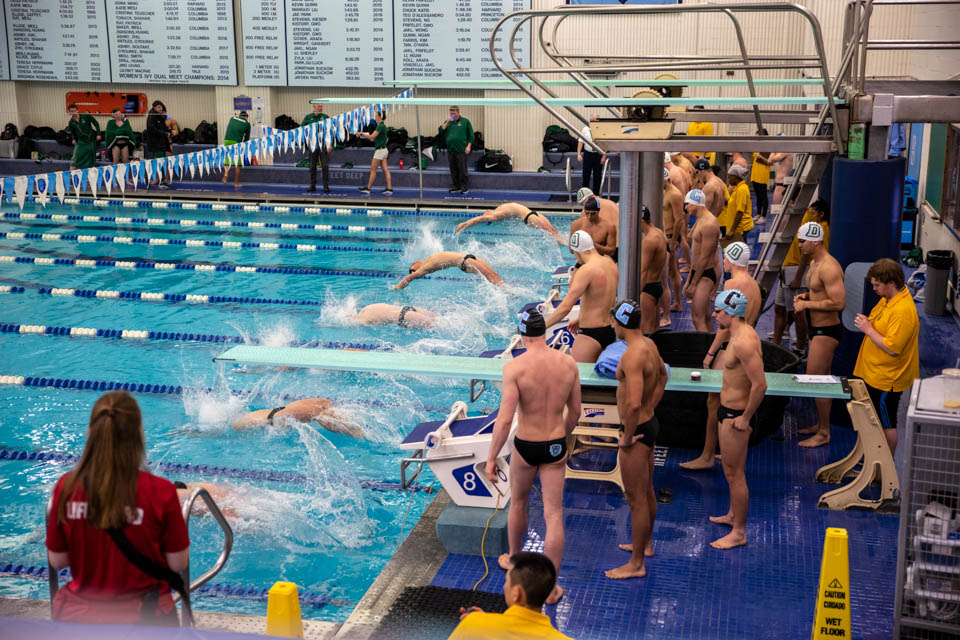 Columbia seniors shone in a beatdown of Dartmouth on Senior Day after men’s swimming and diving suffered the worst loss of the season the day before.

After taking its worst loss of the season against Navy on the road, Columbia men’s swimming and diving recovered to clobber Dartmouth on Senior Day. The Lions’ last home meet of the season, albeit against a weak team, was a resounding success.

The Light Blue finished the month of January with a disappointing 200-100 loss against a talented Navy team in Annapolis, Maryland. The loss continued the Lions’ woes on the road; according to coach Jim Bolster, the four-hour bus ride to Annapolis was draining, making it that much more difficult for the Lions to make a splash in front of Navy’s energetic Senior Day crowd.

“Navy was not a complete surprise to me,” Bolster said. “I’ve been doing this for a long time, and I knew that traveling down there, there was a chance that we might be a little flat, and we could not afford to be flat at all if we were going to beat Navy.”

Columbia gave up first- and second-place finishes to Navy in 10 of 16 events, including a 1-2-3 sweep in the 100 backstroke and a 1-2 win in the 100 breaststroke. Although the relays brought home wins in both the medley and the freestyle events, and junior Albert Gwo continued his undefeated streak in the 50 freestyle, the Lions could not pull much else together.

While a Senior Day morale boost helped Navy to victory on Friday, Columbia’s own Senior Day saw a home win against Dartmouth.

“Our kids were pretty excited, we had a nice big crowd and that helped our guys,” Bolster said. “Certainly being at home helps, we’ve swum well at home all year and this is no different. We had a much better meet and being Senior Day, we had a lot of our seniors’ parents there, and I think they always get excited when their mom and dad are around.”

The parallels were clearest in the backstroke and breaststroke events. While the Lions were dominated in the 100 breaststroke and 100 backstroke the previous afternoon, Columbia swept both those events against Dartmouth, putting up much stronger numbers against a much weaker team.

In addition, diving contributed its first 1-2 finish of the season, with first-year Ben Blizard and senior Shinya Kondo taking first and second in the 3-meter dive.

The Lions’ strongest performer of the day was, fittingly, senior Nian-Guo Liu, who recorded two pool records and a varsity record and was a part of the fastest group in both relay events. Although he swam exhibition in the 100 breaststroke, meaning his time did not count towards Columbia’s point total, his 53:10 time was the fastest ever by a Lion, or by anyone in Uris Pool. In the 200 breaststroke six events later, Liu set a new pool record with a scorching 1:57:19 time, again as an exhibition swimmer.

Because Bolster does not formally select captains, the burden of leadership generally falls on the senior class as a whole. Despite a lack of formal titles, the seniors have helped the team reach success this year.

"We let the senior class be good leaders, and Nian-Guo is part of that class,” Bolster said. “They have just done an outstanding job of being even-keeled, spirited, great camaraderie, and they love what they’re doing. They’ve created a really positive culture and the culture can change every year with whoever is at the helm, but this group of seniors, they just have a wonderful relationship with each other.”

The seniors have only one dual meet left in their collegiate careers. The Lions will take on Princeton next weekend, trying to overcome their road woes before the Ivy Championship meet. Bolster thinks this meet will be different than their past two road meets, which were both bad losses.

Columbia will meet the Tigers on Saturday, Feb. 6, at 1 p.m.