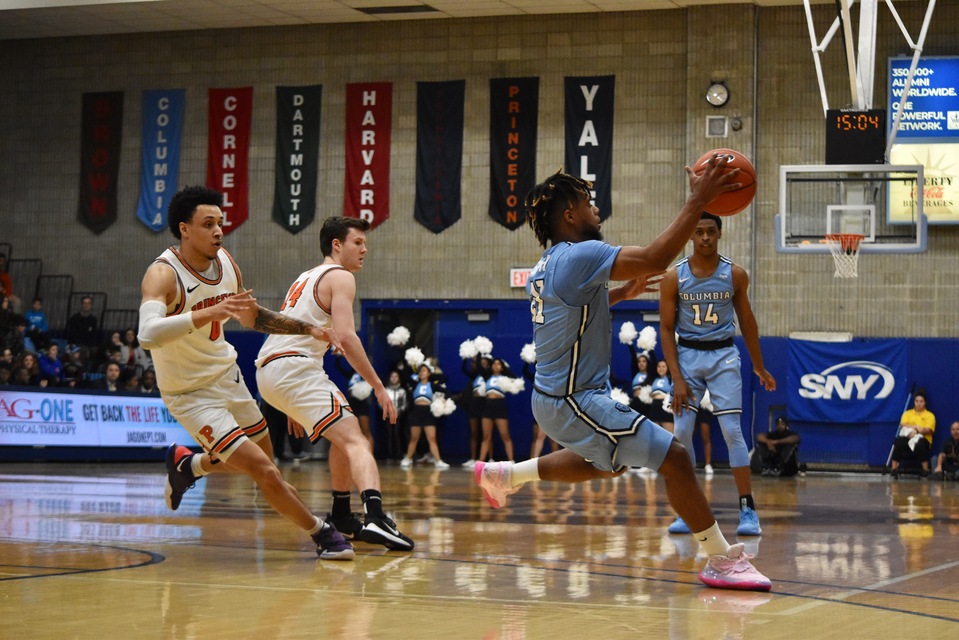 The Lions’ postseason chances took a major hit this weekend with two losses, dropping them to 1-5 in Ivy League play.

The Columbia men’s basketball team experienced another tough weekend of Ivy League play, falling to both Penn and Princeton. bringing the Lions’ to their fifth consecutive loss of the season.

These losses were also the team’s first time dropping back-to-back contests at Levien Gymnasium this season, where the Lions had been a sterling 5-1 prior to this weekend. Their only Ivy League victory this season came three weeks ago in the conference opener against Cornell.

While the Lions failed to pick up a win this weekend, the team demonstrated clear improvements over last Friday’s 31-point drubbing at the hands of Yale, as both games ended in single-digit deficits and were competitive until the closing minutes. For head coach Jim Engles, the results on the scoreboard make clear that the Light Blue’s problem isn’t a lack of effort.

“I’m not disappointed with our effort this weekend. I thought our effort was very high. It really is just focusing on some execution stuff,” Engles said. “Penn last night scored too much on their offense, and ... Princeton, especially at the end, was just breaking us down off the dribble and we gave up too many layups.”

Against Princeton, the Lions once again fell prey to a dominant big, as Richmond Aririguzoh scored 16 points on 8-9 shooting from the field. While Aririguzoh put up a strong showing against the Lions, Engles acknowledged that figuring out how to defend the interior is difficult in a league with so many talented bigs.

“Everybody’s got a kid of that caliber. Everybody’s offense is a little bit different,” Engles said. “We tried to play a little bit straight-up, one-on-one, and then we tried to double a little bit. When Princeton has shooters and you’re rotating, you just have to pick your poison sometimes.”

Sophomore forward Ike Nweke, who had to defend both Brodeur and Aririguzoh, was very up-front about the difficulty in matching up with such skilled offensive bigs, recognizing that what he lacks in size or skill, he has to make up for in other facets of the game.

“They’re taller and somewhat stronger in some scenarios, but I know I’m built for this. I’ve been playing … more skilled guys my entire life,” Nweke said. “I know I have to go into every game knowing that I have to play with grit and toughness, and I have to out-effort them, and make up for what I lack in size or maybe even strength or maybe even quickness or talent. I have to make up for that with effort and grit.”

One area where the Lions do not lack in skill is at point guard, where senior Mike Smith once again showed up for the home crowd. After dropping 21 points against the Quakers, Smith followed up his performance the only way he knows how: more scoring. Smith was lights out against the Tigers, finishing with 30 points, 22 of which came in the second half. Even in light of his successful performance, Smith emphasized that he wants his teammates to be involved as much as possible.

“I just try to get everybody else involved in the game first,” Smith said. “Let everybody eat first and then when I feel like nothing is going on, I try to take over and help the team score more. It’s just something that I’ve always wanted to do and something that as a point guard you should do.”

The team will have a shot to claim its second Ivy League victory this weekend when they travel to New Hampshire to take on Dartmouth on Friday at 7 p.m. before heading out to Cambridge, Massachusetts to battle Harvard on Saturday at 7 p.m. Both games will be aired on ESPN Plus.