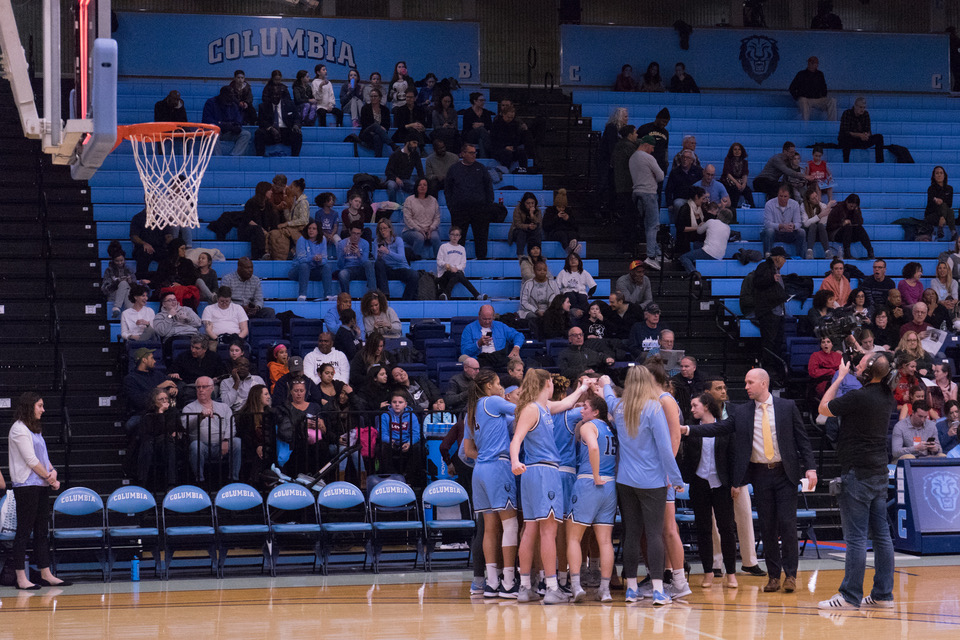 Women’s basketball fell short in both of its games this weekend, losing to Penn 86-84 in overtime and to Princeton 77-55.

Columbia’s defense was not at its peak over the weekend, allowing both of its opponents to score over 75 points. This weekend saw the Lions’ defense fall to sixth in the conference, with the Light Blue letting their opponents score as many as 65.5 points on average. During Ivy play, the Lions have only kept their opponents below 65 once in their win against Brown, while Cornell, Yale, and Penn have all been able to score at least 80 points.

Columbia’s defensive flaws became more apparent compared to Princeton’s on Saturday night. The Tigers’ rotation and weak-side defense was much better, and their active hands and ability to read plays forced 19 turnovers. In contrast, the Lions were slow to respond to screens and cuts, especially on the perimeter, and the Tigers took advantage with 10 three-pointers on 41.7 percent shooting.

Head coach Megan Griffith, once a member of the Princeton coaching staff, mainly attributed the Tigers’ success over the Lions to the other team’s experience.

“There’s a lot of trust there. There’s a lot of game minutes shared between the core players,” Griffith said. “I think we were a little shell-shocked when we didn’t score and we got scored on immediately, like we forgot our coverage right away. Just little things that come with being a young team, and having some mental lapses at times.”

The size of the Lions also seemed to be a problem in both games; their core forwards are all around 6 feet tall. Penn’s forward Eleah Parker, who is 6 feet, 4 inches, scored 28 points on the Lions and grabbed 13 rebounds, while Princeton’s Bella Alarie, also 6 feet, 4 inches, scored 24 the following night. Alarie’s turnaround fadeaways were a huge problem for the Lions as she also went 3 of 6 beyond the arc. Over the weekend, the Lions lost 46 to 64 in the paint.

However, Griffith said that the team shouldn’t let the size of their opponents determine the outcome of a possession: “I always tell them, ‘put me in the game, I’m five-five and I’ll guard anybody that’s six-10, doesn’t matter to me.’ You just got to have a mindset.”

Columbia scored 55 points after finding its rhythm in the second half, which is above the 48.1 points that the Tigers’ defense allows on average. However, the Light Blue dug a 20-point hole by halftime, which proved to be too much of a deficit to come back from against a team on a 13-game winning streak.

Friday night’s loss was even more heartbreaking for Columbia. The Lions seemed to lose sight of the game in the first half and were down by 8 points at halftime. However, a strong performance in the second half was reminiscent of many of the Lions’ previous comebacks. First-year guard Abbey Hsu had three triples in the third, while sophomore forward Sienna Durr had three additional three-pointers in the fourth. The second half was an exciting answerball-after-answerball game, and in the final two minutes of the fourth quarter, the Light Blue went on a 5-0 run to force overtime.

Columbia’s overtime performance wasn’t nearly as clutch as it was in the fourth quarter. After getting the first bucket of overtime, the Lions’ offense went on a three-minute scoring drought despite stopping Penn in two consecutive possessions and having three chances at a basket. The Quakers then extended their lead to five after a 7-0 run and secured the victory at home.

When asked about how this weekend will affect the team going forward, Griffith said that it was still early in the season and that the Lions must focus on what they can do to become better.

Columbia will return home next weekend to host Dartmouth on Friday, Feb. 14 at 7 p.m. and Harvard on Saturday, Feb. 15 at 5 p.m. The games will be broadcast on SNY and ESPN Plus.