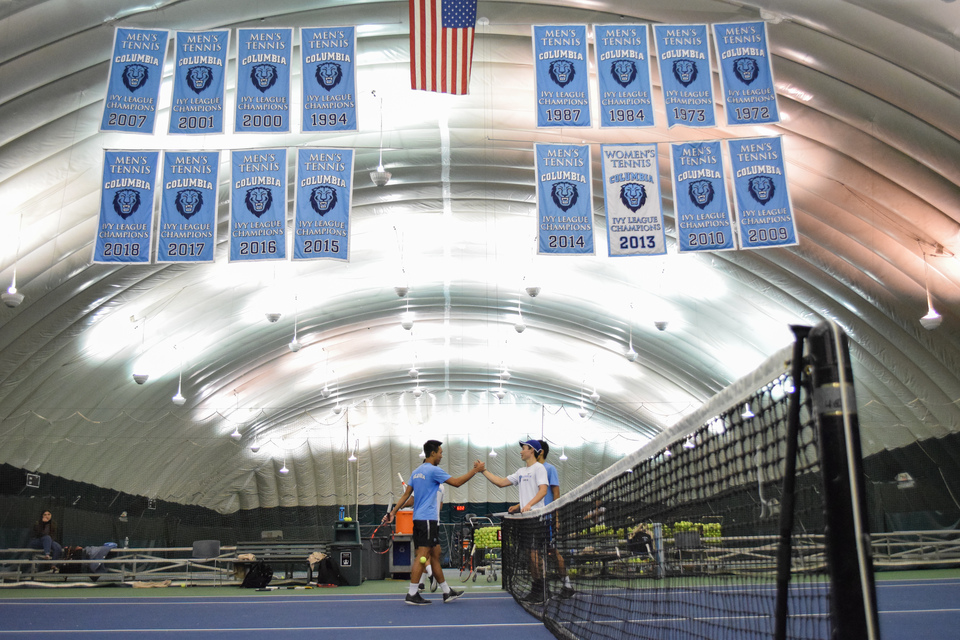 In singles, Huang took down his first- ranked opponent this season in an impressive 6-3, 7-5 win over No. 96 Patrick Maloney.

Women’s tennis successfully defended its title as the Eastern Collegiate Athletic Conference indoor champion this weekend at the Dick Savitt Tennis Center. The Lions’ win was the fourth ECAC title the program has won in the past seven years under the leadership of head coach Illene Weintraub, who also led the team to victories in 2014, 2016, and 2019. This year’s tournament was the first since 2014 to be hosted by the Light Blue.

Columbia (6-2) fought through a strong bracket containing all Ivy League teams except Princeton. Each team participated in three matches for a grand total of 12 over the course of the weekend.

The Lions’ wins pushed the team over .500 to an impressive .750 moving into the second half of nonconference dual matches.

In the first round of competition on Friday, the Lions had their second 4-0 shutout of the season against Brown (3-4). Columbia made quick work of the Bears in doubles. The pairs of first-year Shivani Amineni and junior Jennifer Kerr and sophomore Melissa Sakar and first-year Julia Haynes defeated their opponents 6-0 and 6-1, respectively.

The next day, Columbia moved past Harvard (5-2) with a 4-1 win. The Light Blue took the early doubles advantage with two 6-4 wins over the Crimson, while singles were a similar story, as the Lions never lost control of their matches. Kerr expanded the lead to 2-0 over Harvard, and Haynes continued her dominance on the court for a 6-3, 6-3 win at sixth singles. However, Harvard retaliated in defeating first-year Michelle Xu. While Sakar had to battle for her first set win, forcing a tiebreak 7-5, she swiftly blanked her opponent in her second set 6-0, advancing Columbia to the finals.

Yale came in early, clinching the doubles point and the early advantage. The No. 3-ranked pair of Samantha Martinelli and Jessie Gong defeated junior Paulina Ferrari and sophomore Akanksha Bhan. Amineni and Kerr lost their contest shortly after.

However, the Lions responded with early leads in singles, winning four out of six first sets. It was Sakar who evened the score at 1-1, triumphing over Caroline Dunleavy 6-3, 6-4. This was followed by wins by Haynes and No. 116 Bhan at sixth and first singles respectively. Bhan was victorious over No. 44 Smanth Martinelli, where she rallied back from a 4-2 deficit in her third set to capture the match. To cement the win, Amineni battled through three sets over Raissa Lou at fifth singles.

On the men’s side, the Light Blue faced its strongest opponent of the dual season yet in No. 13 Michigan. In the nailing-biting match, which came down to every court, the Lions (3-1) were unable to keep their perfect record as they fell 4-3 at the Life Time Athletic Club in Harrison, New York.

This loss marked the first time since 2018 that the No. 9 Lions have not defeated their opponents as the host team, as well as the first loss under first-year head coach Howard Endelman, who has overseen victories against top-20 competitors No. 17 Tennessee, Oklahoma State—now ranked No. 21—and the University of South Florida this year.

The Light Blue got the butt of the racquet on the court as the Wolverines (8-1) seized the doubles point. First to fall was the tandem of junior Austen Huang and first-year Alex Kotzen, who were drubbed 6-3 by the No. 42 pairing of Connor Johnston and Ondej Styler. Both top doubles and second doubles courts kept their matches extremely close, but in the end, Michigan was able to capture the early advantage as No. 4 Andrew Fenty and Mattias Siimar defeated No. 5 junior Jack Lin and senior Jackie Tang.

In singles, Huang took down his first-ranked opponent this season in an impressive 6-3, 7-5 win over No. 96 Patrick Maloney.

However, Michigan responded quickly with a win to regain its lead at second singles, as No. 43 Styler defeated No. 109 Tang in straight sets 6-4, 6-4. The Wolverines did not let their lead slip as they also took the win against senior Adam Ambrozy, who fought back to win the second set, but ultimately could not hold on in set three 6-1, 2-6, 6-4.

Though Michigan only needed one more victory to clinch the win at that point, the Lions rallied back from their 3-1 deficit to equalize the score at 3-3. Junior Rian Pandole fought through a three-set match over Siimar 6-4, 2-6, 6-4. No. 99 Kotzen found himself evenly matched with the Wolverines’ Nick Beaty, battling through numerous tiebreakers for his win 7-6 (7), 4-6, 7-6 (5).

The fate of the match was left in the hands of No. 20 Lin as he faced No. 48 Fenty at top singles. Lin dropped the first set 7-5, but refound his footing in the second to take it 6-4. In the third set, both Lin and Beaty were tied at 3-3. However, Beaty was victorious in three consecutive games and seized the match for Michigan.

After qualifying at the ITA Kickoff Weekend, men’s tennis will travel to Madison, Wisconsin to compete in the ITA National Team Indoor Championship. This will be the fifth time in six years the Lions will participate in the prestigious 16-team tournament, which will take place between Friday, Feb. 14 and Monday, Feb. 17.

The women’s team will host Fairfield at the Dick Savitt Tennis Center on Wednesday, Feb. 19. First serve will take place at 4 p.m.