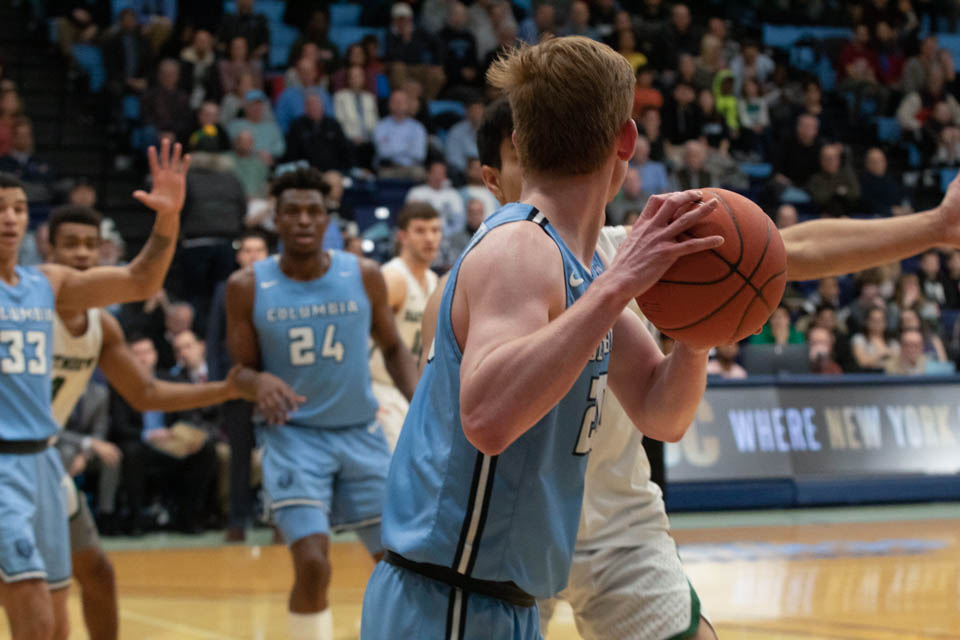 The Lions experienced another tough weekend, dropping games to both Harvard and Dartmouth.

In what is now turning out to be the worst season of head coach Jim Engles’ four-year tenure, men’s basketball lost two more games to Ivy League opponents this weekend. The Light Blue’s latest losses mark its drop to 6-21 on the season, a disastrous 1-11 record in Ivy League play, and an 11-game losing streak that extends to its second conference game this season.

On Senior Night, when senior guard Mike Smith and senior guard Jake Killingsworth played at Levien Gymnasium for the last time, the Lions fell to Dartmouth 76-57, just one night after falling to Harvard 77-69. No loss is ever fun, but for Engles, not being able to send the senior duo out with a win made the loss hurt even more.

“I felt bad for them on Senior Night,” Engles said. “I know when you have your family here, and it’s your last time on your home court, you always want to go out with a win, and I was really disappointed that we weren’t able to reward Mike and Jake because they’ve done so much for us these past four years.”

Smith, in particular, saw over 30 people in the stands sporting blue shirts adorned with the letter “M” for his first name. After the game, Smith said that having that many family and friends in the crowd “means everything,” and the Burr Ridge, Illinois native made sure to put on a show for the crowd. Smith put up what was perhaps his best all-around performance of the season, finishing with 25 points, 8 rebounds, and 7 assists. What is even more impressive is that he did this following a night in which he put up 34 points, including 26 in the second half alone.

While the Lions have struggled to find a second fiddle on offense this season, the return of sophomore forward Ike Nweke to the starting lineup gave the team some hope that he could fill that role in the future. Nweke missed last week’s slate with an injury but finished in double figures in both contests this weekend, including a dominant 14 point, 12 rebound double-double against Dartmouth.

Entering the season, the Lions were optimistic that they would be competitive in the Ancient Eight. The notion of a starting backcourt with Smith—the sixth leading scorer in the nation—and junior guard Gabe Stefanini, a second-team all-Ivy League selection a year ago, projected the Lions to be an offensive juggernaut, the likes of which have not been seen by the Ivy League. But while Smith was everything the Lions could have possibly hoped for and more, Stefanini has been out all season with a foot injury.

With Stefanini injured, the senior duo of Smith and Killingsworth has had to pick up the brunt of Stefanini’s production. As a result, Smith has played an average of 37.7 minutes per game this season and often plays all 40 minutes. Killingsworth has a similarly difficult 33.3 minutes per game, almost 9 minutes more than his injury-shortened 2018-2019 season. While the two have not complained about their increased loads, Engles believes that all of those minutes started to catch up to them in the Dartmouth game.

“I really felt like we got tired in the second half. I thought that was just a big deal,” Engles said. “I was looking at Jake and Mike and I was thinking about taking them out, but you just have to ride with them … this was the first time this year that I thought we were physically exhausted.”

Even though putting such heavy minutes on Smith and Killingsworth ultimately cost the Lions against Dartmouth, the surfeit of opportunity has put Smith in the position to potentially break Columbia basketball’s single-season scoring record. Smith needs to score 58 points in the final two games to top the record held by Chet Forte, CC ’57, of 694 points, a record he set in the 1956-1957 season. When asked whether he believes that he can reach that number in the season’s final weekend, Smith was confident in his ability to do so while maintaining his focus on winning.

“I think I can [break the single-season scoring record],” Smith said. “You know, I’m just trying to win, but if that takes that then I’m going to try to do it.”

Smith will go for the record this weekend as the Lions go up against Princeton on Friday, March 6 at 7 p.m. in Jadwin Gymnasium before facing Penn the following night at 6 p.m. at the legendary Palestra. Both games will air on ESPN Plus.