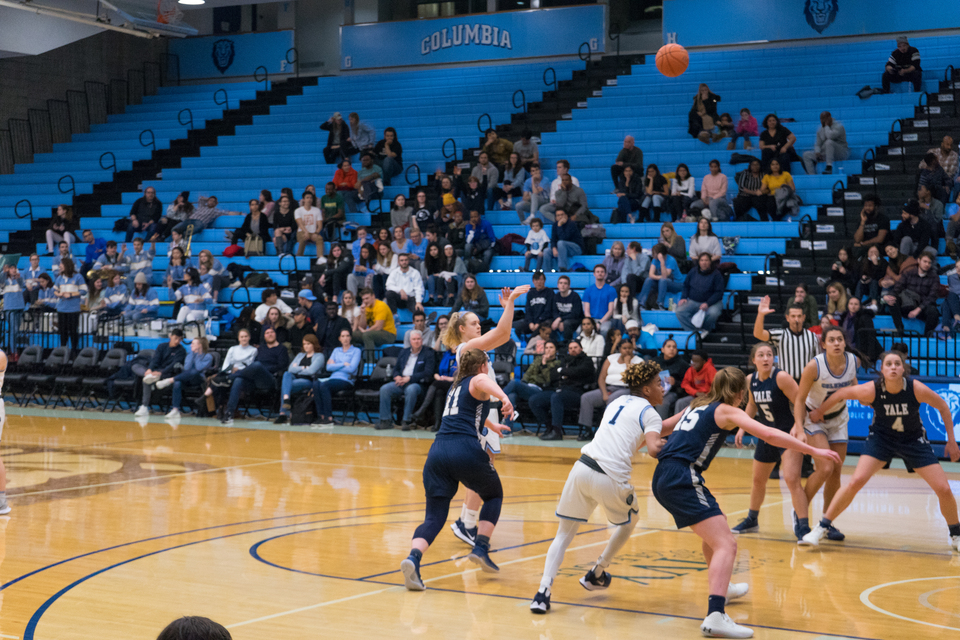 Columbia swepts Harvard for the first time in program history.

Women’s basketball double killed the Crimson and the Big Green to secure a tournament spot after its 62-57 win in Cambridge. This extended the team’s winning streak to six games, the program’s longest in Ivy play. Columbia now ranks third in the Ivy League after consolidating its record with a 62-50 victory against Dartmouth and looks to finish the regular season strong at Levien Gymnasium next weekend.

Since losing three weeks ago, Columbia (17-8, 8-4 Ivy) has been unstoppable, sending Harvard (14-11, 5-7 Ivy) into a five-game losing streak with a 25-point beatdown on Feb. 15, and defeating Yale on Feb. 22 to compete for tournament seeding. Head coach Megan Griffith said that after getting blown out by Princeton, the team remained focused on molding its own identity.

During their winning streak, the Lions have tightened up their defense by allowing an average of 60.8 points per game, almost 8 points fewer than their conference-play average. Their offense has also been on fire—scoring over 70 points a game in the last two weekends—but cooled down during this weekend’s matches as the Light Blue’s opponents tightened coverage on first-year guard Abbey Hsu.

The Lions pushed through injuries to earn wins this weekend as sophomore guard Mikayla Markham and sophomore forward Sienna Durr went down with ankle injuries at Friday’s game against the Crimson.

The team is still assessing the severity of Markham’s and Durr’s injuries; both were seen on crutches at Dartmouth. With both of them sidelined, the Lions only had 9 healthy players in Hanover.

In times of desperation, sophomore forward Hannah Pratt stepped up, leading the team with 17 points against Harvard and 13 points and 12 rebounds against Dartmouth. Pratt was a key starter for the Lions earlier in the season, but she had not scored double-digit points in conference play until her career-high 17 points on Friday.

“Hannah was prime, she’s prime for a big weekend,” Griffith said. “This is the growth that you hope to see in your players, and it’s a huge testament to what my staff has been doing developing players. … I’m really proud of the work that everybody has been putting in.”

Pratt’s scoring in the Harvard game kept the game within grasp for the Lions. Harvard’s Lola Mullaney started the second quarter with an 8-0 run on the Lions. In the first half, she and teammate Tess Sussman shot 60 percent beyond the arc to give the Crimson a 7-point cushion. Hsu, Durr, and Davis, on the other hand, combined for just 8 points, but Pratt’s 10 points paved the way for the Light Blue’s’ second-half comeback.

Hsu, who shot 1-of-7 from the field before the fourth quarter, but finally found her stride with 12 fourth-quarter points. When the game was tied at 50, Hsu converted two huge three-pointers on the right flank to suddenly make it a two-possession game with 2:17 to go.

Although Hsu struggled in comparison to her 31-point night against Harvard, she makes her opponents pay whenever they lose sight of her for even a second.

Hsu bounced back on Saturday night against Dartmouth, scoring 17 points and grabbing 12 rebounds in the dominating win. The game was practically over after the Lions started with a 17-2 run, and although the Big Green forced eight turnovers in the third to reduce the deficit to 11, the Lions still dominated with a 10-0 run to finish the quarter. Columbia also outrebounded Dartmouth 46 to 29, continuing its strong display in that area.

Looking ahead to the program’s first-ever Ivy League tournament, Griffith said that the team is keeping its eyes on what’s right in front of it, allowing them to be in the best shape for the postseason. The Light Blue will finish the regular season with a tough weekend at home against the Princeton Tigers, who are on a 20-game winning streak, and the Penn Quakers, who barely defeated the Light Blue in overtime during their last meeting.

The Princeton game will be on Pride Night, Friday, March 6 at 7 p.m., and the Penn game will be on Saturday, March 7 at 5 p.m., which will also be Senior Night for senior captain Janiya Clemmons. Both games will be broadcast on ESPN Plus.