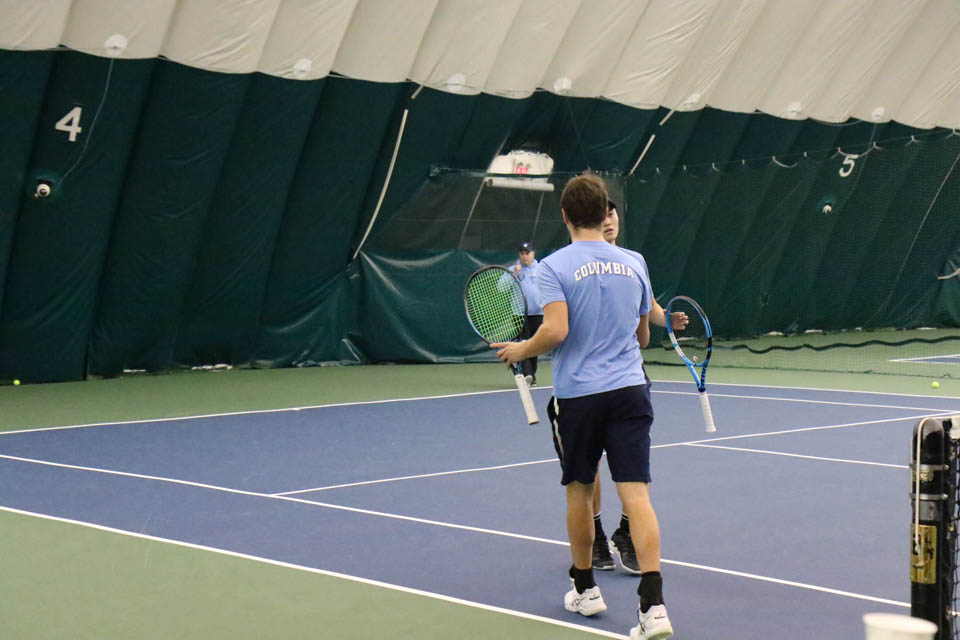 The Lions’ defeat by Northwestern was the team’s first loss to a non-top-15 team since March 2018.

After a week off, men’s tennis took a trip to Evanston, Illinois to face DePaul and No. 34 Northwestern. These were the Lions’ first non-tournament dual matches and provided split results for the No. 7 ranked team.

DePaul (6-9) provided the Light Blue (6-3) with its third consecutive victory, but this match was by no means smooth sailing.

The doubles lineup was changed to reflect the absence of No. 25 junior Jack Lin. At third doubles, senior Jackie Tang and first-year Anand Saluja dropped the first match of the day 6-1. However, the tandem of junior Jason Lui and first-year Alex Kotzen fought through Tripp Tuff and Luuk Wassenaar for a 6-4 win. Down to the line, at top court doubles, senior Adam Ambrozy and junior Rian Pandole battled to give the Lions the early advantage. Despite a forced tiebreaker, the pair was unable to prevail, falling 7-6 to the DePaul pairing.

However, the contest became a tale of two games when the Lions hit the singles court. No. 88 Tang equalized the score 6-1, 6-2 at top court doubles. This was quickly followed by wins from Pandole and junior Austen Huang 6-3, 6-0 and 6-4, 6-2, respectively. Huang remains the only Lion who has played singles during the dual season to remain undefeated.

The remaining courts, however, were uphill battles. All three went into a third set, and two reached tiebreakers in their third sets.

No. 116 Kotzen dropped his first set 6-4 but quickly rallied back to defeat his opponent 6-1, 6-4 in the final two sets. Kotzen’s victory clinched the win for the Lions.

The Lions continued the remaining matches for a complete sweep of singles. While Ambrozy was unable to defeat his competitor in his first set, he fought back to seize his second and third sets 3-6, 6-2, 7-6. It was a similar story for Lui who defeated Fran Tonejc 4-6, 6-3, 7-5.

The Light Blue (6-3) should have found an easy foe in Northwestern (7-4), which has only one ranked player, No. 113 Dominik Stary. Last season, the Lions shut out the Wildcats 7-0, but the team that came to play on Saturday did so with a vengeance.

The Wildcats ended up being a harsh competitor for the Lions. Weak doubles play coupled with third set singles losses dished out the team’s first loss to a team ranked below the top 15 since March 2018.

The doubles point was clinched quickly by Northwestern. The Lions shook up their doubles lineup once more, again not playing Lin. This change was deemed ineffective as Pandole and Ambrozy fell at first doubles. However, Huang and Tang took down their opponents at third doubles 6-3 to put all the pressure on the middle court. In the end, the Wildcats prevailed over Lui and Kotzen.

Singles play presented a similar story for the Light Blue, as two courts fell in straight sets. However, Lin’s arrival to the court proved to be instrumental to the Lions’ comeback. His match against Stary proved to be a battle of extremes, but one in which Lin was able to succeed 1-6, 6-1, 6-2.

The fate of the Light Blue came down to the final court. As Pandole captured his win, Tang was battling through a third-set tiebreaker. However, his efforts proved to be for naught as he dropped his third set, falling 7-6 (8), 1-6, 7-6 (4).

The Light Blue will return to the Dick Savitt Tennis Center on March 7. It will face Florida Atlantic at 1 p.m.