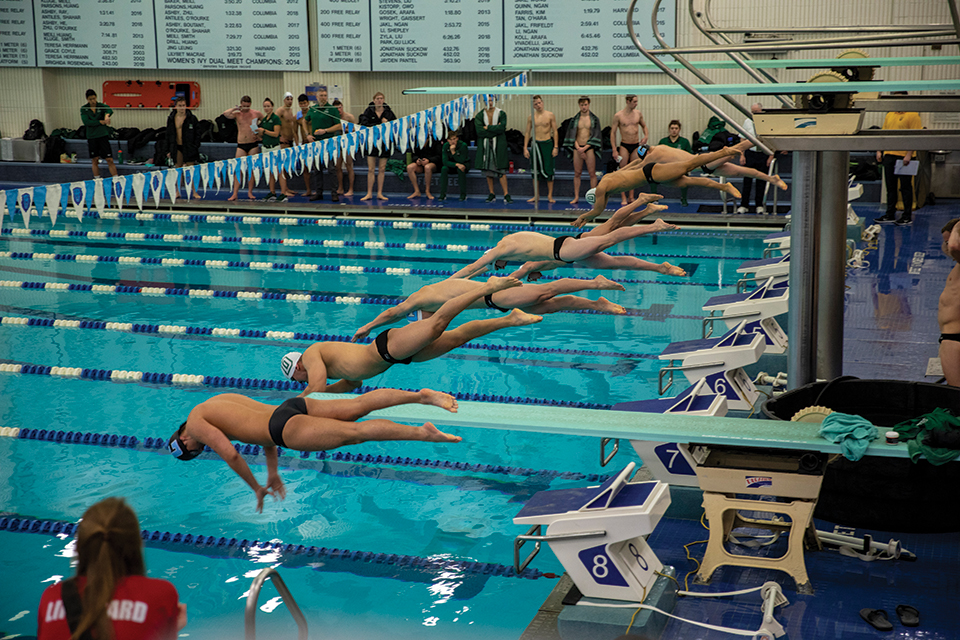 Men’s swimming and diving finished its season with a fifth-place finish at the Ivy League Championships. Led by historic dominance from its relay groups and two individual golds for junior freestyle sprinter Albert Gwo, the Lions were in the hunt for third place throughout the four-day meet. But with the heartbreak of two disqualifications for senior Nian-Guo Liu in events he had dominated throughout the season, the Lions dropped into the bottom half of the conference.

Entering the meet, Bolster knew that a championship title would likely be out of reach for the Lions (6-3, 5-2 Ivy). Harvard (8-2, 7-0 Ivy) and Princeton (7-3, 5-2 Ivy) have been the top two Ivy League teams for 46 of the last 47 years, except in 2017, when Harvard won and Princeton did not compete. Although Columbia pulled off a gutsy 160-140 dual meet win over the Tigers three weeks before Ivies, an upset at the lengthier championship meet seemed unlikely. However, clustered in the middle of the pack were Yale (6-3, 4-3 Ivy), Brown (4-4, 3-4 Ivy), and Columbia, all chasing after third.

“Fifth place was probably not indicative of the effort [put into the meet], but that’s the place that we did finish,” head coach Jim Bolster said.

Gwo gave Columbia a leg up at the start of the meet. The detail-oriented sprinter spent the season perfecting his start and turns, and saw his effort pay off at the championship, as he broke school and pool records in the preliminaries of the 50 freestyle with a blazing NCAA-B qualifying time of 19.32 before winning the finals at a similar pace, earning Columbia’s first swimming gold in five years. Gwo also earned top honors in the 100 freestyle and the 200 and 400 medley relays.

Gwo splashed the water joyfully, fist-pumped, and flexed to celebrate after carrying the 100 free. However, the perfectionist needed growth and mental work to achieve his first championship titles.

“[Gwo] struggled in a lot of ways [as a] first-year,” Bolster said. “We had a long talk about what we thought his potential was, and I think he, more than anything, realized that he was in so much more control of his destiny than he realized. And if he wanted to be this good, there was nothing stopping him.”

At this point in the year, Gwo’s stellar performance has become an expected occurrence. Bolster expected Gwo to shine in the medley relays, along with Liu and sophomore Jonas Kistorp. However, there was a question mark in the first leg of the race: senior Cole Stevens.

For the past three years, Stevens swam backstroke in the medley relay in the championships, surrounded by a solid team. However, Stevens had underperformed, and this year, the Lions, who hadn’t won a relay since 2011, were seeded fourth in the race, indicating low expectations.

“Every year we’ve gone in with high hopes, thinking that he was really going to nail it, and he struggled,” Bolster said. “This year, he figured it out.”

Bolster was hoping for a 22.2 second split for Stevens’ 50 backstroke leg of the relay. Stevens went 21.9, setting his teammates up for success and earning Columbia’s first-ever gold medal in the 200 medley relay.

“It wasn’t necessarily expected that we were going to win it, but our backstroker [Stevens] was really the key,” Bolster said. “He needed to keep us close … [and] he did exactly what he needed to. We have arguably three of the fastest kids in the league in the breaststroke, butterfly, and freestyle. … They followed suit, and boy it was fantastic.”

The fantastic performance in the medley relays was one of the only bright spots for Liu, who earned medals in those events but took two crushing disqualifications in his best races.

“I think he was devastated by both of those calls,” Bolster said. “I don’t think that he was aware that he had done anything wrong, and I think that he was aware of how important every swim is to our team race. And to have those two races taken from him, … I felt so bad for him. And in the last meet of his career, to get disqualified from two events, it was just a devastating blow for him.”

Officials disqualified Liu in the preliminaries of the 200 IM for a false start. Race officials disagreed on which swimmer flinched, recording a false start in two different lanes. Columbia challenged the call, but Liu was ultimately not allowed to compete; his time would have qualified for the “A” final and earned the team at least 22 points. His win in this event against Princeton earlier in the month was one of the driving factors that pushed Columbia to victory.

Later, swimming in the A final of the 200 breaststroke, he was disqualified for using a butterfly kick. Had his time counted, he would have won the event and earned 32 points.

“We didn’t swim well enough that we were going to be able to make up those 60-some-odd points,” Bolster said of the standings impact. The team ultimately lost by 60 points to Yale in the battle for third place.

The disqualifications impacted the Lions’ struggle to get a leg up in the standings, but Bolster saw things differently. Liu, Bolster said, has been a leader on the team and a role model for younger swimmers, especially by stepping up to race new events as needed throughout the year.

“I’m sure it’s breaking his heart to feel like ‘Wow, look what happened at this meet to me, and as a result, the team,’” Bolster said. “But that’s not how I look at it. … His contributions to this program and this team far outweigh anything that he could have ever done at this meet or anywhere.”

Bolster has been coaching for 36 years, and his teams have finished everywhere from third to eighth in the conference. So although the disqualifications were disappointing for Bolster, he focused his attention instead on personal character and leadership.

“If I had a team of Nian-Guos,” Bolster said, “I probably wouldn’t have any gray hair, and I’d coach forever.”