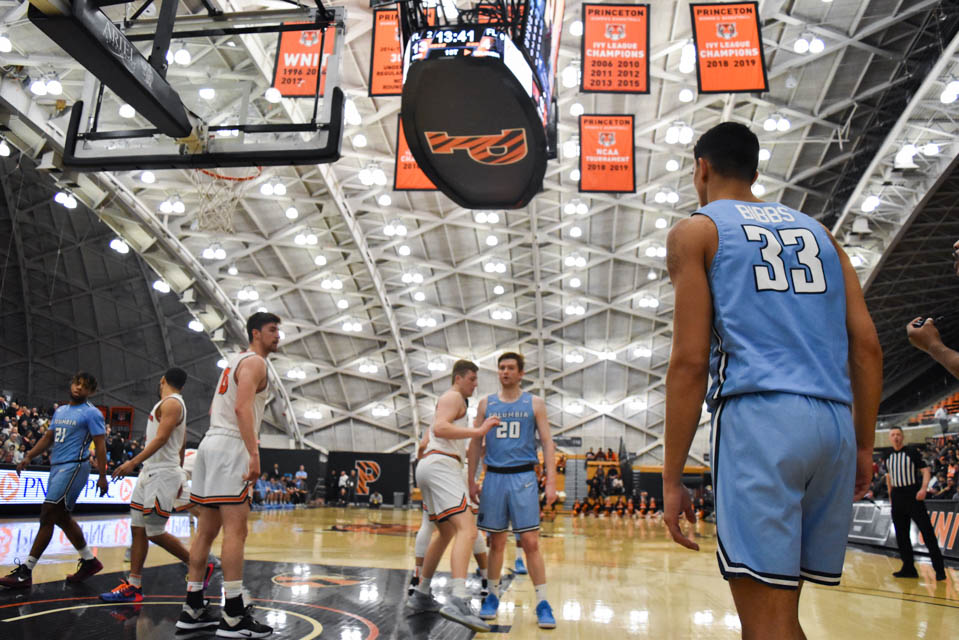 With this week’s losses, men’s basketball secured its worst record since the 2002-03 season in which the team finished 2-25.

Columbia men’s basketball failed to secure its second Ivy League win this weekend. The losses to Princeton on Friday and Penn on Saturday marked the team’s 12th and 13th consecutive losses, cementing the Lions’ spot at the bottom of the Ancient Eight.

With this week’s losses, the Lions (6-23, 1-13 Ivy) secured their worst record since the 2002-03 season, in which the team finished 2-25 and 0-14 Ivy. Though the team entered the season with high expectations, a number of noteworthy absences left four-year head coach Jim Engles wondering what could have been. Among those missing during the season were junior forward and All-Ivy League Honorable Mention Patrick Tapé, who withdrew from the team before the start of the season, while junior guard and Second Team All-Ivy League selection Gabe Stefanini missed all season with a foot injury.

“It’s going to be an interesting season to reflect upon,” Engles said. “You know, I thought we had a legitimate chance in the summertime, coming in and being one of the better teams in the league, and then just stuff happens, as everything does in life, and that’s sports. The season certainly didn’t go the way we sort of put it on paper to start the year.”

Even with an outstanding season from senior guard Mike Smith, who finished sixth in the nation in scoring with 22.8 points per game this season, the Lions were hampered by the losses of two of the team’s most notable contributors from last season.

The team felt the absences’ impact on Friday night when it traveled to Princeton (14-13, 9-5 Ivy) only to get blown out by a final score of 81-58. It quickly became clear that Columbia was outmatched by the Tigers, who opened up a 12-point lead only seven minutes into the game. After the game, a clearly frustrated Engles explained how he felt about his team’s performance.

It was the same story for Columbia in Saturday’s matchup against Penn (16-11, 8-6 Ivy), as the lack of critical players plaguing the Lions all season long was a deciding factor in the team’s 85-65 loss. Penn’s star forward AJ Brodeur, who broke Penn’s all-time scoring and block records in this contest, was able to take advantage of the Lions’ lack of depth and finished with a 21-point triple-double. For Engles, the Light Blue needs to get better around the interior if it hopes to build off of this season.

Another concern heading into next season is whether the Lions can fill the massive hole at point guard that Smith’s departure will leave. Due to Ivy League regulations, Smith—who has one year of NCAA eligibility remaining after missing most of last season due to injury—must transfer if he hopes to play for another season. While Smith is most concerned right now with where he’ll end up next season, the Illinois native also has bigger plans in mind.

Meanwhile, Engles is already focused on figuring out who will fill Smith’s shoes next season. Of course, he knows that whoever does become the team’s next starting point guard will not be able to match Smith’s talent and productivity.

“You don’t replace Mike. Mike’s an ultra-dynamic guard, so we’re not going to replace him individually. We’ve got some guys on our roster that are going to have to step up,” Engles said. “We’re going to miss Mike in a lot of ways, so it’s unfortunate. I wish he had another year left to play for us.”

With Smith out the door, the Lions will face an uphill battle figuring out who can lead the team in the coming years. However, as first-year guard Jack Forrest said, the team is optimistic about what is in store for the Lions, saying that the future is all “up from here.”

That being said, it’s easy to look up when you’re sitting at the bottom.