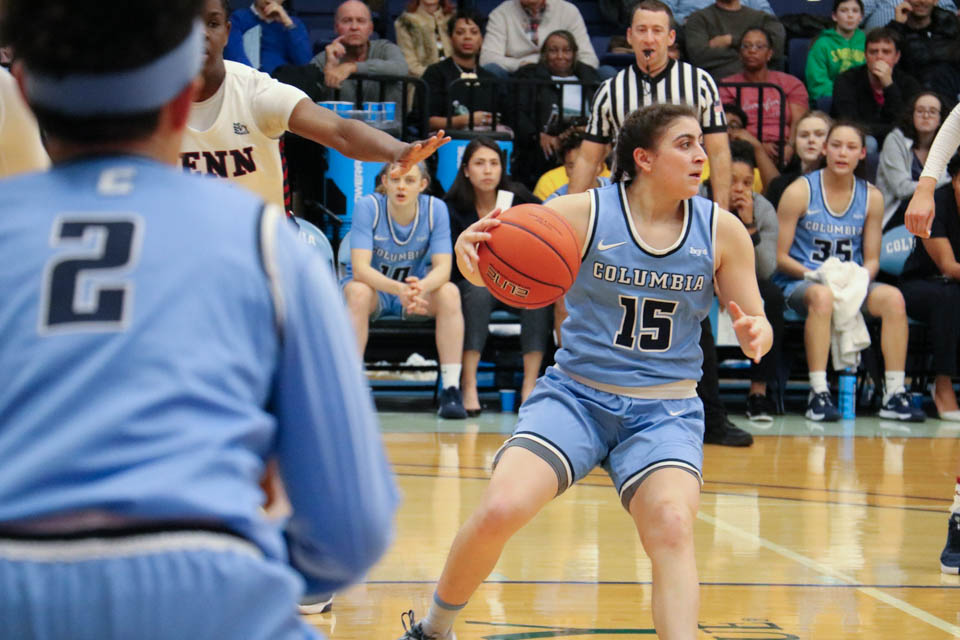 The Lions marched into postseason as the fourth seed.

Women’s basketball dropped both games in its last home weekend to end the regular season. The Lions’ offense failed to pick up steam in the 77-52 loss to Princeton, as well as in the 51-36 defeat to Penn, locking down the fourth playoff seed.

It was disappointing for Columbia (17-10, 8-6 Ivy) to follow up a six-game win streak with two losses at home, as the Lions had been fighting for second place in the standings with Penn (20-7, 10-4 Ivy) and Yale (19-8, 9-5 Ivy) so that it could avoid Princeton (26-1, 14-0 Ivy) in the first round of Ivy Madness. Unfortunately for the Light Blue, losing two players to injury last weekend was a blow to the Lions’ cohesion and firepower in the two decisive games.

But head coach Megan Griffith and her team, who will face top-seeded Princeton next weekend, believe that they are ready for the challenge. To advance, the Lions need to secure a win and end the Tigers’ 22-game win streak, despite being blown out twice this season by Princeton.

“I want to play the best, all the time,” said Griffith after the loss to Princeton. “I tell them that if I’m going up against UConn, South Carolina, I don’t care, I think I’m going to win every game.”

After the loss to Penn, Griffith reaffirmed her confidence, saying that she had told the Penn coaches after the game that she will see them next weekend, implying that the Lions will step over the Tigers in the first round.

According to Griffith—a previous Tigers coach who has been scouting the team for weeks—she knew, conceptually, how to counter the league’s best team. In Friday’s game, the Lions were familiar with the majority of Princeton’s plays and even knew their names. In one possession, a Princeton guard called “swing” and first-year guard Carly Rivera immediately shouted “swing” to signal to her teammates what to do on defense.

Consequently, Princeton’s Bella Alarie, a potential WNBA lottery pick, had just one field goal under the Lions defense last Friday. The Lions hung in there in the first half and had a run in early third quarter, reducing the lead to five points at 36-31. But after that, the Light Blue slacked off, committing 11 turnovers, and Princeton outscored Columbia by 20.

“At the beginning I thought we were very locked in to our game plan, we were executing, and we hit a little low, and that’s when they capitalized on it,” senior captain Janiya Clemmons said. “Instead of coming back together, we kind of grew a little bit further apart.”

Going into the final quarter the players tried to do too much on their own when they found themselves in a desperate situation, especially on offense. The Lions only had seven assists against the Tigers, less than half of their average. The offensive struggle continued into the Penn game, when the Lions scored just 36 points, their lowest since 2015.

Clemmons started off both games aggressively, getting four out of Columbia’s first 7 points on Friday, and 8 first-quarter points on Saturday. However, despite the good starts, she went 2-for-11 after the initial points against Princeton, and 2-for-14 after the first quarter against Penn. As her declining performances in these games demonstrate, the Lions reliance on individual players only adds pressure to these athletes, instead of adding points onto the scoreboard.

The offense in the Penn matchup was particularly hard to watch since both teams shot terribly, especially in the second half. Penn shot less than 20 percent in both quarters, while Columbia went 2-for-20 in the third and 5-for-18 in the fourth. The last time that the two went head to head, first-year guard Abbey Hsu dropped 28 points on the Quakers, so she was the main focus of Penn’s defense on Saturday. Penn would double team Hsu almost every time she touched the ball, so she had just one shot attempt in the first half—extremely uncharacteristic for the reigning Rookie of the Week.

Without Hsu’s domination, the Lions seemed to forget how to score. Instead of getting Hsu open or taking advantage of the double teams, Columbia was too keen on playing hero ball and failed.

“I thought the reason we beat Harvard at Harvard and we beat Yale at Yale was that people stepped up and did their jobs,” Griffith said. “It wasn’t Abbey hitting shots for us and saving the day. … Everybody else was taking care of business. We have not been doing that this weekend. … We gotta understand, like, we can’t ask one person to save the day. That’s not how we got to this point.”

For the team as a whole, it was a weekend to forget, but for Clemmons, the weekend was bittersweet. The senior played her last home game in Levien Gymnasium on Saturday. From averaging 2.4 points to leading the Lions to the tournament, Clemmons has grown over the years, and Griffith, who joined the program the same year as Clemmons, said that Clemmons has grown immensely and been like a daughter to her.

Clemmons tried to not think about her last game too much and focused on the journey ahead in the tournament.

“We knew no one was going to give us anything,” Clemmons said. “We’ve got to get back to that chip on our shoulder [mentality], knowing that … we’re not going to just tip the ball and everything’s going to go in our favor.”

The Lions hope to bring that mentality into Friday’s match-up against Princeton.