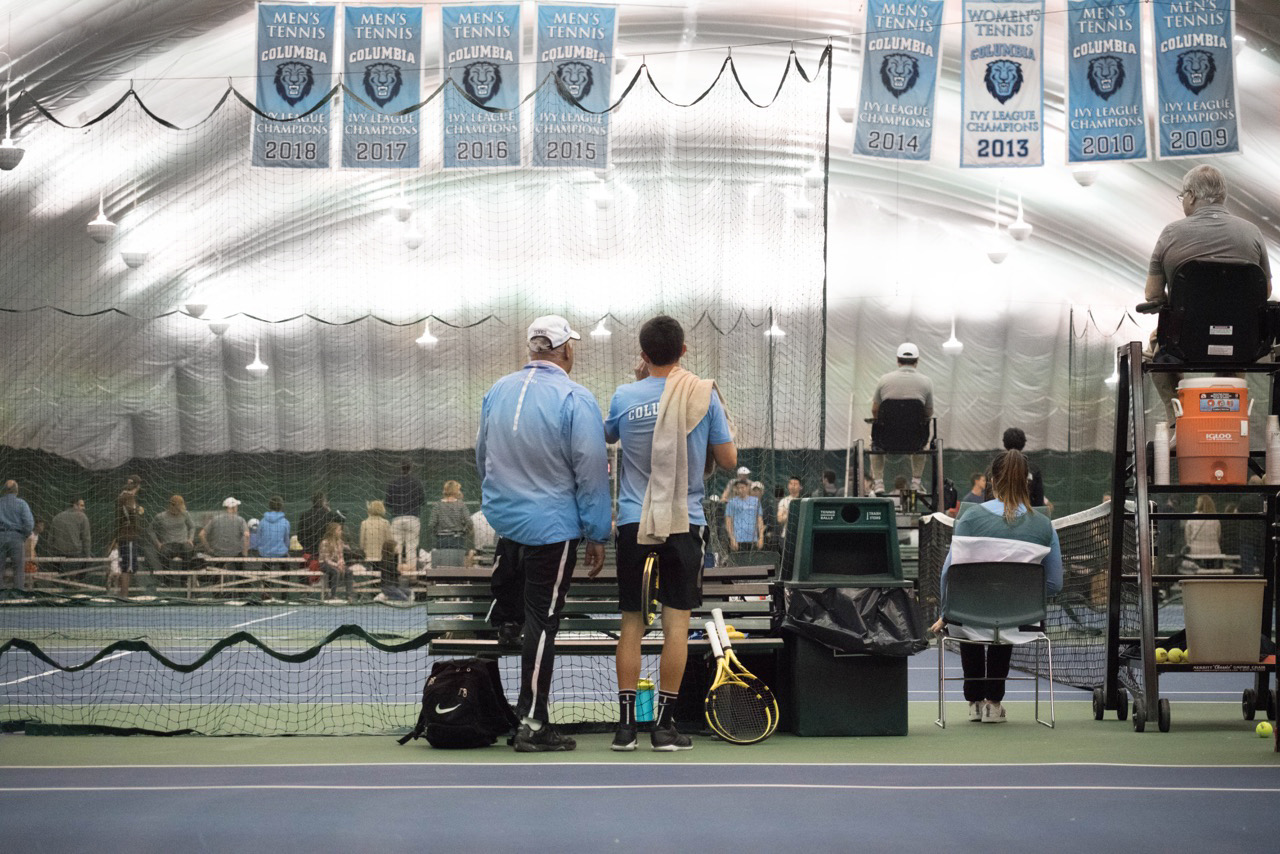 Despite impressive play on the court, senior Alex Keyser struggled with a consistent knee injury starting in spring 2017.

This is the first edition of “The Season That Could Have Been,” Spectator’s series on spring 2020 sports.

Alex Keyser’s senior season ended before it ever really began.

But it wasn’t the Ivy League’s cancellation of all spring sports practices and competitions that prevented Keyser from competing in the dual season. Instead, it was a long-standing knee injury he endured during his first-year Ivy campaign that stopped him from hitting the hard courts of the Dick Savitt Tennis Center.

At the University of Virginia’s Orange and Blue Classic in September 2019, Keyser hurt himself in his second set. He had to retire from the match and the rest of his season.

“I would periodically take breaks here and there. I would be fine. And [the pain] kept coming back and I had a handful of procedures to try and make it better. And sometimes they’d be better for like six months in a row. But sometimes it would hurt after a month,” Keyser said. “ I tried to do another procedure with [my knee], but it wasn’t getting better.”

Keyser hoped to compete for the spring dual season, but after the procedure did not alleviate the pain, he had to come to terms with the fact that the odds were not in his favor to play during his senior season.

The University had approved the team’s annual spring break to Texas in the days before the Ivy League’s cancellation of all spring sports due to the spread of COVID-19, so it came as a shock to Keyser and the other members of the tennis team that they would no longer be able to compete for the remainder of the season.

“I feel like I tried everything I could in order to try and play the game, but I just couldn’t get there. So me personally, I had some closure. But as far as the team, I don’t think so,” he said. “You know, you worked so hard and you don’t really get to compete in the Ivy League and it just hurts so much.”

While Keyser only played sporadically due to his injury, when he was on the court, he became a strong force from his first year onward.

He was recruited for the Lions as a Blue Chip prospect, ranked at No. 16 for all recruits in the country.

But despite his prowess on the court, Keyser struggled to reconcile his academics with his participation on the tennis team, as he competed in the 2016 Intercollegiate Tennis Association All-American Championships in Tulsa, Oklahoma, one of the larger tournaments of the fall. As a first-year, he had to compete in both the pre-qualifying and qualifying rounds of the competition in order to be added to the main draw.

For first-years, reaching the main draw is almost unheard of. However, Keyser did not perform at the level of most other first-years. After defeating four consecutive opponents, he earned a spot in the qualifying singles draw. Then, the first-year did the unexpected and triumphed over his next three competitors—including the No. 58 player in the ITA, in straight sets—to qualify for the main draw, becoming the fourth first-year to accomplish that feat in the event’s history.

By competing in the All-American tournament, Keyser had to miss an entire week of classes. It became a lesson for him in time management, which he felt was one of the most important lessons he picked up during his time at Columbia.

“That was a tough adjustment,” he said. “Once you learn that, you really have the feeling when you do study; you really have to focus once you get that. [Time management] is still hard, but now comes much, much easier. Just figuring out a way to balance your time and allocate specific times of the night to do your homework and focus only on your homework, you could really get a lot of work done.”

In his junior year, Keyser continued to shine, going 4-0 in all singles play. However, despite such dominant play, he believes his main contribution to the tennis team was his laid-back attitude and support for the team, especially after his sophomore year, when his role began to shift due to his injury.

“He was a really great practice partner to play with,” Victor Pham, CC ’19, said. “After his sophomore year, he became a bit more focused with helping the team off the court, preparing for matches whenever we were traveling. He was a really great support system and was always being a very good friend to everyone.”

When asked what he will miss the most about Columbia, Keyser instantly responded “the guys on the team.” According to Keyser, the tennis team became his family on campus, with older members Shawn Hadavi, CC ’17, and Christopher “Booie” Grant, CC ’17, helping him adjust to the difference in academic pressure between his California public school and Columbia.

As Keyser became an upperclassman himself, he too began helping new players on the team transition to life at Columbia, emphasizing that this is the “support everyone needed.”

The strong community aspect of the Columbia tennis team is what helped Pham—then only a high school senior who had committed to Columbia—convince Keyser to take a tour. The pair had grown up an hour away from one another in California. They had practiced with and competed against each other for their entire lives.

“Obviously, on the court, I knew he’d be a huge benefactor for the program. But he was also really hard-working, a nice kid to be around with. He’s also a really good friend and I thought he would fit into Columbia since as a team we were doing a lot of things together off the court as well,” Pham said.

Initially, Keyser did not consider joining the Lions due to former head coach Bid Goswami’s less aggressive style of recruiting. Other coaches would send frequent emails, but Goswami had only sent one. However, once Keyser came onto campus, he decided he did not want to leave because of his instant connection to the members of the team, whom he now calls his “best friends.”

In losing his senior spring, Keyser was not able to say a proper goodbye to those best friends, Columbia, or to the tennis program. He might have gotten more closure than many of his teammates, but still, he feels that he has lost out on an opportunity.

“I miss it a lot. I miss the guys a lot,” he said. “It’s weird because you prepare for graduation. You think, ‘Oh I have so much time left. I can enjoy my time in college before I leave it.’ You think you can do whatever you need to do before, you know. I feel like I’ve done what I needed to do at college, but kind of got cut short,” he said.

Alex Keyser’s senior season may have ended prematurely, but his devotion to the program is one with no expiration date.

“I’m definitely going to be one of those guys that comes back 30 years from now. Go back to the Dick Savitt Tennis Center and watch the matches no matter what. I can see now why all the alumni come back and watch it and care so much,” he said. “The tennis program meant a lot to me throughout my college career. I’m sure it's going to mean a lot to me when I’m in the real world.”