“I haven’t reached my potential”: After leading her team to a cancelled postseason, Janiya Clemmons weighs basketball and banking

“I haven’t reached my potential”: After leading her team to a cancelled postseason, Janiya Clemmons weighs basketball and banking 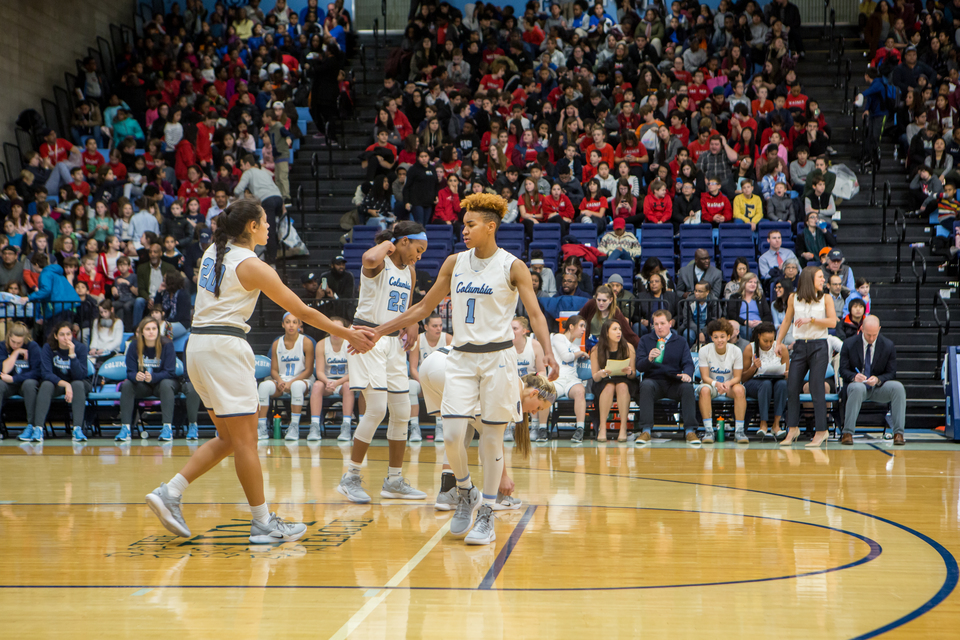 Senior Janiya Clemmons led the Lions to their first playoff berth ever, but her tournament hopes were smashed by COVID-19.

This is the third edition of “The Season That Could Have Been,” Spectator’s series on spring 2020 sports.

When the coaching staff came back with Athletics Director Peter Pilling, senior guard Janiya Clemmons knew that the Ivy League women’s basketball tournament must have been canceled, marking the end of her season and college career. At first, the captain kept her composure as she looked at the younger players in the huddle; however, it was devastating news for everyone on the team, especially for head coach Megan Griffith, who had talked about going to the Ivy League tournament for months.

When Pilling approached Clemmons and said, “Sorry, Jay, you had a great career,” a flood of emotions overcame her. Since Clemmons’ first year with the team, Griffith’s Lions had been building slowly, eventually putting up the best regular season in Columbia history before dropping the final two games and heading toward a David and Goliath matchup against Princeton in the postseason championship run. The timeline stopped abruptly there; while it felt unfinished, there was no more to come. Clemmons remembered the recruits she had met and wished them luck in her head, but she could not picture herself lifting up the championship trophy anymore.

“All the work we had put in got ripped from us,” Clemmons said. “I know that they’re going to do it again next year. … They’re going to be in an even better spot, but for me, it was really important to be a part of it.”

Clemmons called the tournament cancellation the biggest disappointment of her career—worse than all the games she spent sitting on the bench during her first season, and worse than all of those close games the Lions lost in the 2018-19 season when they thought they would make their first tournament appearance.

From averaging just 10 minutes per game to leading the Lions to the postseason tournament as the team’s captain and only senior, Clemmons has come a long way, and she thought her biggest enemy during this journey was herself. She always believed that she had the skills to do anything on the court, but her confidence in games would sometimes drop. In three-point shooting, her historic weakness, she would hesitate to lift up her hands even when she could consistently make shots in practice. It was not until the final weeks of this season, she said, that after seeing her shots falling, she started to think, “Hey, I could have been doing this the whole time!”

Just as she did with her own career, Clemmons felt that the Light Blue finally converted its talents and training this season by flipping the one or two games that it lost in 2018 and closing out games in Ivy play, which differentiated a bottom-tier team from a title-contending team. When the Light Blue secured the tournament spot after beating Dartmouth on Feb. 29, Clemmons cried.

At first, she was irritated about her own performance during that game, but she soon realized that she and her team were off to the postseason and could not resist the mixture of ecstasy and sorrow, as there were just two games left for her at Levien Gym.

On Senior Night, the team and Clemmons reached a valley. They scored their lowest since 2015 in the crucial seeding game against Penn. Clemmons took a season-high 19 shots in her final game, but only made five field goals. After that game, Clemmons urged the team to look toward the tournament, not knowing that it would eventually be canceled. This forward-looking mentality has stayed with her. Although her college career is now over, she has countless opportunities waiting for her after graduation. COVID-19 has in many ways helped her recognize the world beyond basketball and her life beyond Columbia.

“When the season ended, it took me a while to actually come to terms with the fact that it was really over. I still felt that they’ll push the tournament back. ... I was just kind of holding on a little bit longer,” Clemmons said. “When Columbia sent the message that we all had to move out of the dorms, I realized that what the world is going through is much bigger than basketball, much bigger than my senior year. Then I realized, ‘Wow, not only is basketball over, but college is pretty much over.’”

At home practicing social distancing, Clemmons misses other Columbians, especially her teammates. She feels like she has made relationships that could last her a lifetime during her four years on the team. She especially appreciated former teammate Camille Zimmerman, CC ʼ18, for showing her what the grind looks like, and Griffith for always being there to encourage her and make sure that she never slacked off for a second.

Right now, she looks toward the future, as she used to after every game during the season. She has prepared highlights of herself to send to agents and is ready to be back in the gym to fight for a professional basketball career overseas.

The professional basketball market right now is strange and volatile due to the coronavirus pandemic, but Clemmons has talked to Zimmerman—a professional player in Finland—who told her to just be patient. Unfortunately, Clemmons could be stuck at home not knowing what her destination is until late summer. To make things more complicated, she earned an offer from CitiBank, which starts in July, but she plans to decline it if she gets an offer to play professionally.

This is almost the exact situation that Griffith faced when she graduated from Columbia in 2007, dropping an offer from Lincoln Financial Group to play professionally in Finland. Clemmons has framed Griffith as her role model over the years, labeling her as “someone who showed me what toughness and resilience was.” Likewise, Griffith has often referred to Clemmons as a daughter. The duo’s close relationship surely influenced Clemmons’ career path.

From a young age, Clemmons added, she dreamed of playing professionally. Now that her college career has been cut short by an off-court opponent, she wants to continue her basketball journey and complete it. She has to give up a stable Wall Street job for this dream, but at the moment, her passion for basketball overshadows any material benefit she could get from CitiBank.

“When you talk about money, yeah, it’s a hard decision, but when you talk about what I want to do with my future––at least in the near future––I know that I’m not done with basketball, and I haven’t reached my potential so that’s an easy decision right there,” Clemmons said.