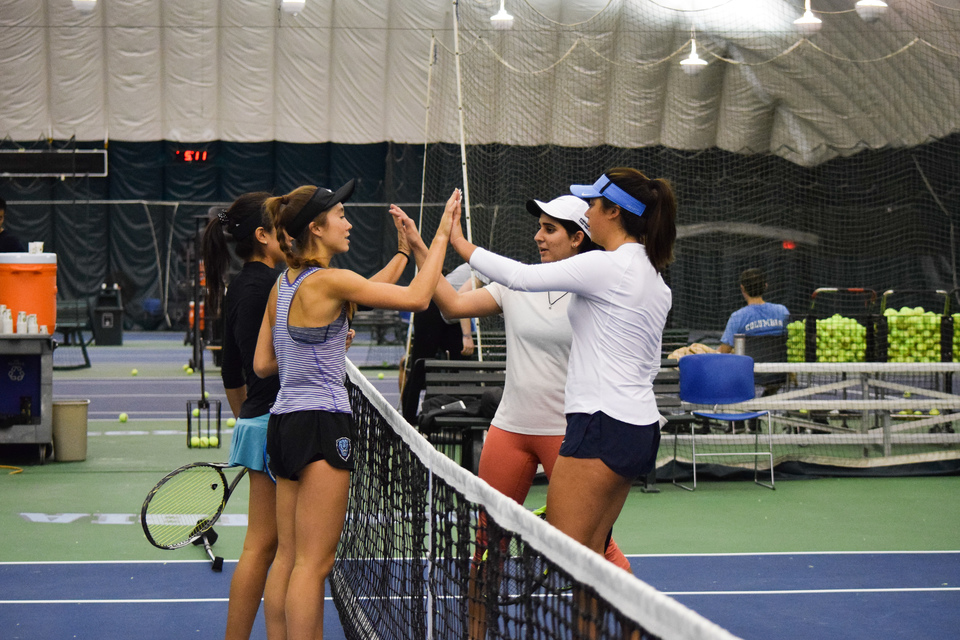 Sophomore Akanksha Bhan proved herself a leader on and off the court and displayed her prowess by becoming the first women’s tennis player from Columbia to earn a spot at the ITA All-American Main Draw, one of college tennis’ Grand Slams.

This is the fourth edition of “The Season That Could Have Been,” Spectator’s series on spring 2020 sports.

Before the coronavirus made history for the women’s tennis team this season, Akanksha Bhan did. The sophomore was the first player in program history to earn a spot in the main draw of the Intercollegiate Tennis Association All-American, one of college tennis’ Grand Slams. Her performance at the tournament and strong play throughout the abridged season alluded to great potential for the women’s tennis program, which has enjoyed tremendous improvement in the past few years under head coach Ilene Weintraub.

Thanks to strong individual performances from players like Bhan, the Lions dazzled opponents all season, taking down national powerhouses like No. 25 Syracuse and No. 34 Washington State in February. Though the team was poised for greatness in Ivy play, that potential disintegrated after the season’s cancellation in light of the coronavirus pandemic.

Although the quest for another Ancient Eight crown will have to wait until next year, the Light Blue has plenty to celebrate this season. Rookies produced clutch performances—first-year Shivani Amenini clinched Columbia’s win over the Orange, and classmate Julia Haynes did the same two days later against the Cougars—and the Lions claimed the Eastern College Athletic Conference title with a tight 4-3 victory over Yale. But perhaps the brightest star for the women’s tennis program this year has been Bhan, a threat in both the singles and doubles events and whom Weintraub praised as “one of the most selfless players I’ve ever had the pleasure of coaching.”

Inspired by her older sister, Bhan said she first picked up a racquet when she was seven. By the time she graduated from Udgam School for Children in Ahmedabad, India, she held the No. 28 national ranking and was, according to the International Tennis Federation World Junior Rankings, among the top 140 worldwide. Since college tennis wasn’t really a “thing in India,” Bhan said, she and her family conducted a global search for a university that offered tennis.

“Columbia offered me the best choice of academics as well as tennis, and our team is pretty diverse, and I really liked that about us. Plus, living in New York City has always been a dream for me,” Bhan said. “It’s still a dream.”

Bhan wasted no time making her mark on the program after she arrived in the city. Slotted at No. 1 doubles and No. 2 singles, the then-first-year earned the ITA Northeast Regional Player to Watch Award, leading the Lions in singles victories and tournament wins. Bhan and her doubles partner, then-sophomore Paulina Ferrari, picked up multiple tournament titles throughout the season, including the Columbia Invitational and the Brown Invitational. The duo was also selected to compete at the All-American Championships in Malibu, California.

According to Ferrari, the pair’s complementary temperaments have proven to be an advantage on the court.

“Our personalities are very different, and I think they balance each other very well. Akanksha is very calm, cool, and collected; I’m a little louder, very extroverted, especially in competition, getting really excited when things are going really well,” Ferrari said.

Bhan agreed, noting that the duo also brings different styles of play to the match. Bhan said she prefers staying back and taking care of the baseline, while Ferrari finishes points from the net. But it is not just the pair’s strategies that make them a good fit for one another—Bhan added that her partner is “a really good person on and off the court.”

“I can see whenever we’re on court I know [Ferrari] wants it bad, and she keeps me motivated to give my best, even if I’m playing singles and she’s on the sideline trying to get me through it. It’s always a nice time to hang out with her. … I’m going to miss her after senior year after she graduates,” Bhan said.

Bhan has proven herself a force to be reckoned with in singles as well as doubles. She concluded the 2019-2020 season with a No. 105 singles ranking by the ITA, defeating six nationally-ranked opponents on her own and two nationally ranked doubles teams with Ferrari.

Perhaps her most stunning success came at the ITA All-American main draw in October. Known as one of the Grand Slams of college tennis, the ITA All-American consists of three rounds and stretches over a week. This season, the tournament was held from Oct. 5 to 13 in Tulsa, Oklahoma. There were 96 pre-qualifiers facing off to enter the qualifying round, and 64 earned a spot in the main draw. Before this season, no women’s tennis player from Columbia had advanced to the main draw.

Not only did Bhan clinch a coveted spot, but she did so while battling a preexisting hip injury. An extensive rehab program on campus, combined with regular visits to the trainer after her matches and plenty of icing, allowed Bhan to excel in the tournament. She picked off Baylor’s Jessica Hinojosa 4-6, 6-1, 6-3 and Arkansas’ Martina Zerulo 6-3, 3-6, 6-4 in the qualifying round before falling to Florida Atlantic’s Martina Kudelova in her first match of the main draw.

Bhan endured five rounds of matches with the injury before securing a spot in the main draw.

“It was a pretty big deal for me. I went with my assistant coach, and every single match, every single time, I talked to him on the changeovers. I was always like, ‘I want this, I want this really bad,’ because I knew how much it meant to me and my team and Ilene. … So I wanted to do this for all of us,” Bhan said.

Not only did Bhan recognize what her performance meant to Weintraub and the team, but Weintraub reciprocally understands just how important the team is to Bhan.

“She’s always looking out for everyone else around her,” Weintraub said. “She is an extremely hardworking young woman, always comes to practice with a smile on her face, looking to get better and improve every day.”

“Her results speak for themselves,” the head coach concluded.

Bhan was a member of a strong corps of Lions whose consistent dominance throughout the year allowed the Light Blue to achieve its highest-ever national ranking of No. 21. When the news arrived that the remainder of the season would be canceled, the team was coming off sweeps against St. John’s and Rhode Island, with the monumental victories against Washington State and Syracuse still fresh. The Lions would have been formidable contenders in Ancient Eight play had the season continued.

Instead of facing off against Ivy opponents, Bhan spent the better part of March isolating in her room back home in India. She said the team’s new normal includes a lot of FaceTiming as well as maintaining multiple group chats, where they discuss workouts, local happenings, and how much they miss each other.

“Before the season even started we had a team meeting about how we wanted to put as much effort as we could to do the best we can, and after the meeting from the very next day, we saw results even in practice—like everyone was giving 100 percent on the court and in the gym,” Bhan said. “It was really inspiring for me too. They motivated me.”

The Light Blue won’t have an opportunity to continue its dominance until next season. Rather than ending her promising sophomore campaign with a bid for the Ancient Eight title, Bhan is spending the remainder of the season playing tennis in her backyard when she can. It is “a bit heartbreaking,” Bhan said, “but safety is most important.”

“We are definitely trying to stay in shape and come back stronger next fall and be ready to do even better,” she promised.