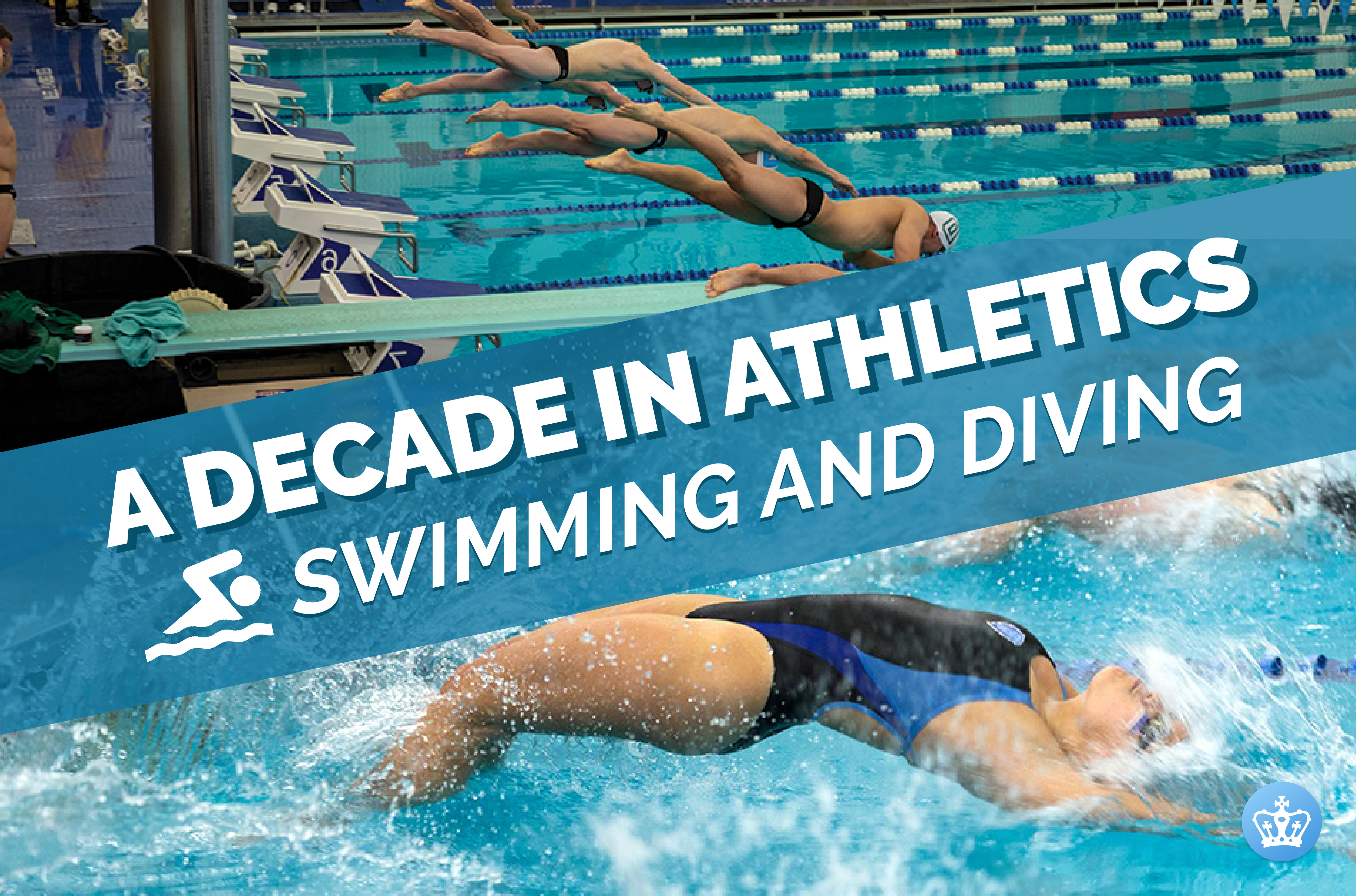 Swimming will now have to wait another year to see how its stars perform due to COVID-19.

Men and women’s swimming at Columbia operate under a long shadow, that of Ivy League heavyweights Harvard and Princeton. It’s been 48 years since Harvard and Princeton were both denied the championship on the men’s side, and only one women’s team has broken the seal in the last 20 years. This means, effectively, that the Lions must battle it out for third every year.

Although the Light Blue never broke into the top two this decade, women’s swimming surged to previously undiscovered heights from 2011 to 2014, but regressed towards the bottom of the conference after.

One of the program’s biggest standouts was Katie Meili, CC ’13, who went on to become one of Columbia’s most decorated athletes ever, breaking a slew of Light Blue records on her way to an Olympic bronze medal. The steady leadership of head coach Diana Caskey ushered the team to numerous firsts throughout the decade, including an undefeated 2013-14 season and NCAA Championship appearances.

Meili won her first Ivy title in 2011 with a 1:59.20 time in the 200-yard individual medley, a win that gave an inkling of her dominance to come. That year, for the third time in program history, Columbia placed third at the Ivy League Championships, which stands as its best mark ever.

The Light Blue continued to make an impact across the Ivy League in its 2011-12 campaign when it defeated Princeton for the first time in program history and captured five Ancient Eight individual titles at the championship, the most successful Ivy season ever at that point.

The 2012-14 period was a historic peak for the Lions. In 2013, Columbia finished 21st at the NCAA Championships, the best mark for an Ivy League school that year. From 2013-14, the Light Blue clinched its first undefeated regular season, going 7-0 in Ancient Eight dual-meet play and besting Harvard for the first time in program history.

Following the 2014 season, however, the program began to falter. The Lions placed fifth, sixth, or seventh at the Ivy League Championships over the next six years and only managed to win one more individual Ivy League title: senior Helen Wojdylo’s 2019 triumph in the 100-yard breaststroke.

Men’s swimming also started off the decade strong before regressing slightly and oscillating between third and sixth place. While Columbia has never broken into the top two under longtime coach Jim Bolster, it did set up many individual swimmers and divers for success on a national level. The program sent individuals to the Championships every year except 2012, when a competitive national field meant that all eight Lions with nearly qualifying times were beat out by athletes from other conferences.

In the strong early years of the decade, the team was led by its freestyle swimmers, with Adam Powell, CC ’11, earning NCAA bids in 2010 and 2011 and breaking multiple sprinting school records along the way. The Lions were a force to be reckoned with at the annual championships, staging a 154-point comeback to push into third place in 2010 and breaking the school’s 400-meter medley relay record by four seconds in 2011 to secure their spot. Despite Powell’s graduation, they earned the same place in 2012 and used a group effort to secure a program-high point total—and a bronze—in 2013.

Although the Lions slipped slightly in the following years, they were boosted by talented divers who thrived under the decade’s two different coaches. Standout athletes included the dominant Jayden Pantel, CC ’18, who earned NCAA Championship berths for four straight years, and junior Jonathan Suckow, who took fifth place at the NCAAs on the 3-meter dive in 2019, Columbia’s highest placement in 36 years, and had a chance to compete for the Swiss Olympic team this year.

With the absence of Suckow in 2020, the diving program struggled in parts of the season, but once again the sprinting side stepped up. Junior freestyle sprinter Albert Gwo dominated the 50 and 100 freestyle all semester and qualified for the NCAA Championships from his win at Ivies, although those too were postponed. But considering the circumstances, the Lions performed quite consistently this semester. 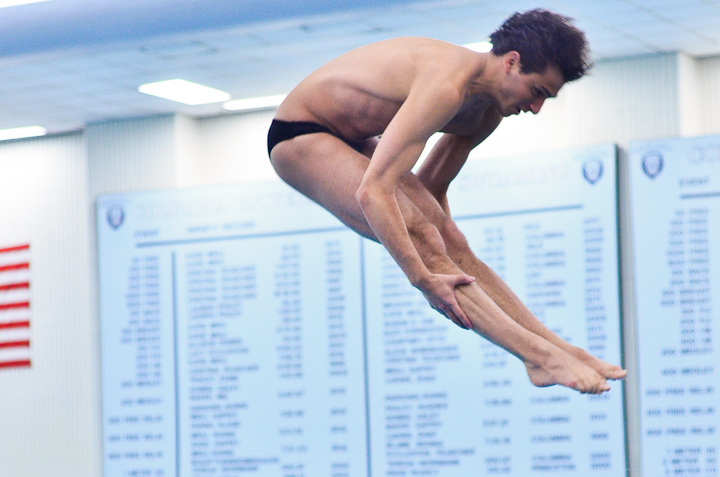 Although it may not be immediately apparent from the national success that Columbia diving has enjoyed this decade, it was actually a major time of change for the program. Gordon Spencer, who spent 33 years at the helm of Columbia diving and earned nine Ivy League diving titles in his time, retired in 2016.

Spencer left some big shoes to fill; he was known for his ability to connect with athletes, contributing to an extremely high retention rate for divers, according to head coach Jim Bolster. He led athletes to Columbia diving’s first NCAA Championships since World War II, and he specifically mentored Pantel, who went 22-0 in dual meets and earned two NCAA Championship bids in their two years together before being named Ivy League Diver of the Year in 2016.

It was a difficult hole to fill after Spencer’s departure. However, Olympian Scott Donie stepped into Spencer’s head coaching role and took the program to another level, working with Pantel and Suckow to earn four NCAA Championship bids during his time as coach so far. In his first year on the job, Donie returned to his home pool with Pantel for the NCAA Championships, where Pantel competed in the 3-meter and platform dives—the same dives that Donie won as an Indiana University student in 1992.

Donie also helped to recruit and develop Suckow, who blew past the 3-meter dive record in his collegiate debut and set the school record on that dive four more times in his first year alone. He went on to an undefeated dual-meet career and a perfect record at the Ivy League Championships in his first two years and finished third at the international meet FINA Grand Prix in Malaysia the summer after his sophomore year. Suckow took a gap year in 2019-20 and planned to compete for a spot on the Swiss Olympic team before the delay of the games.

However, while Donie coaches prospective Olympians, Spencer has already built a legacy at Uris Pool with a hundred-thousand dollar fund for Columbia diving dedicated in his name.

From the beginning of Meili’s Columbia career, it was clear that the swimmer would be a force within the Lions’ program, but the scope of Meili’s success was almost unprecedented.

In her first year, Meili finished second in the 100-yard breaststroke at Ivy League Championships, earning her a place on the second-team All-Ivy League, an impressive start to an illustrious career. During her sophomore season, she began to emerge as one of the best swimmers to don the light blue. Meili won the 2011 Ivy League Championship in the 200-yard individual medley, as well as earning CollegeSwimming.com Mid Major All-American honors and a spot on the first-team All-Ivy League.

In her junior year, Meili put forth a season of unequivocal superiority. The swimmer captured a staggering five Ivy League titles at the Ivy League Championships, becoming the first woman in Ancient Eight history to swim a 100-yard breaststroke race in under a minute’s time, clocking in at 59.64. This feat qualified her to advance to the NCAA Championships, and she became the first woman to represent the Lions at that stage since 2001. There, she also became the first Columbia swimmer to be recognized at that level since Cristina Teuscher, CC ’00, in 2000 by placing fifth in the 100-yard breaststroke and earning an All-American honorable mention,

Meili would end her Columbia career outranking all her teammates. She took home four more Ivy League titles in 2013, making her the Columbia swimmer with the most Ivy League Championships. Her 58.44 100-yard breaststroke time, which won her a second consecutive Swimmer of the Meet honor at those Ivy Championships, stands today as the fastest Ivy League Championship time in history. She would go on to post three top-10 finishes at that year’s NCAA Championships, an honor that preceded her eventual bronze medal in the 100-meter breaststroke in Rio de Janeiro in 2016. 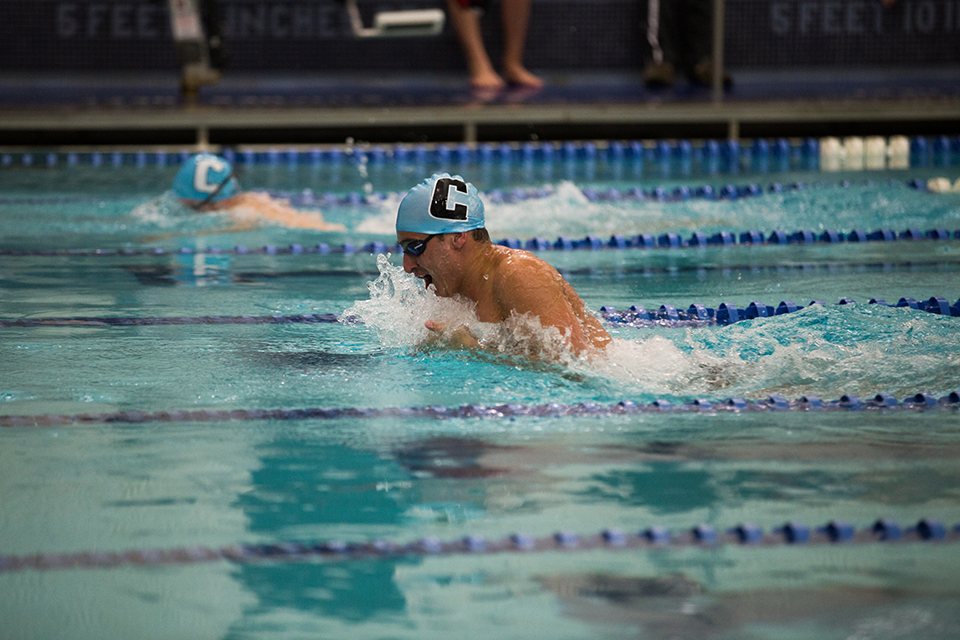 Though Columbia has routinely been successful in regular-season play throughout the 2010s, it has consistently been unable to match that success in the postseason Ivy League Championships.

One glaring example of this inconsistency is the 2013-14 campaign. That year, Columbia surged to an undefeated conference record for the first time in program history. But when it came time to spar against Ivy League titans Harvard and Princeton at the end-of-season championships, the Light Blue wasn’t up to the task. It placed third at those championships, over 200 points behind runner-up Princeton and the champion Harvard.

Another example is the 2011-12 season, when Columbia placed fourth behind Yale and Princeton, after defeating both opponents earlier that season.

Though the capacity to recruit and develop stellar talent has been proven, an Ivy League Championship remains out of the roster’s grasp for now.