Beyond all expectations: Seniors Iman Sule and Katie Wasserman break records on the track and excel in the classroom

Beyond all expectations: Seniors Iman Sule and Katie Wasserman break records on the track and excel in the classroom 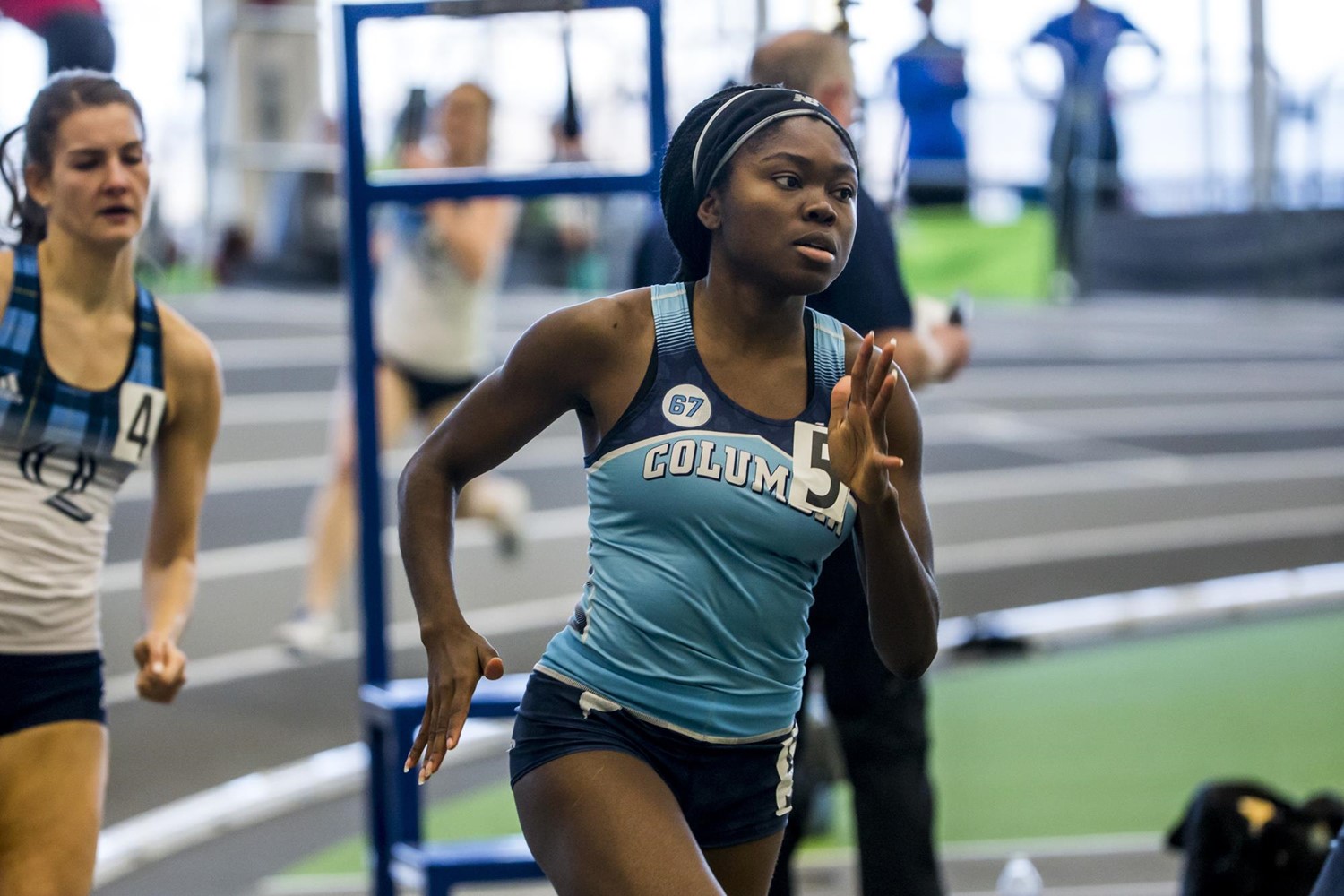 Despite shouldering additional responsibility as student-athletes, Wasserman and Sule succeeded both academically and athletically.

This is the fifth edition of “The Season That Could Have Been,” Spectator’s series on spring 2020 sports.

The track and field careers of seniors Iman Sule and Katie Wasserman have come full circle. The two athletes ended their Columbia careers where they first started: back at home.

Like most students, Sule and Wasserman had to pack up their dorms in response to the COVID-19 pandemic; they will end their college careers, like all Columbia seniors, with a virtual graduation. Despite the fate that they share with fellow seniors, their three-and-a-half years at Columbia were anything but typical. Sule and Wasserman made Columbia history by qualifying for Nationals without reflecting student-athlete stereotypes.

As an uncoordinated middle schooler, Sule gravitated to track and field’s simplicity of movement. Once she began running, her career took off. Her talent first surfaced in youth competitions in which she beat all the boys, and it continued to develop in high school under an inspiring coach.

Wasserman first started running in high school as a supplement to soccer, but she quickly fell in love with track and field as an individual sport. Wasserman continued her commitment to both throughout high school despite her track coach urging her to replace soccer with cross country.

While Sule and Wasserman’s track and field careers began differently, they similarly gained traction in high school. Sule claimed she was not “really good” until her junior year. That year, she made it to the Junior Olympics for the 400-meter dash. After participating in this race, Sule said she finally recognized the possibility of college recruitment.

Wasserman’s likelihood of recruitment also became clear during her junior year of high school. Prior to that, when asked if she would do track and field in college, she would reply, “I don’t think so, maybe if they have a spot on the team.” Only after she began to receive recruitment letters between her junior and senior years did she realize that she could pursue track in college.

Wasserman’s and Sule’s track and field careers finally intersected at Columbia, where they left their marks on the track as NCAA qualifiers. However, Wasserman and Sule both said that they entered Columbia feeling as though they had to prove themselves in the classroom.

Sule said she dealt with a “stigma around athletes” on Columbia’s campus, while Wasserman said she felt intimidated by others in her classes.

“I’ll be unsure of myself a lot, and it’s always in the back of my mind—especially in classes like Lit Hum and [Contemporary Civilization] where it’s such a small group—that these are the real Columbia kids and I’m just this girl from this tiny town in New Jersey who could run fast. I think that was playing out in my mind a lot, especially in the beginning,” Wasserman said.

Sule and Wasserman learned to deal with the stigma in similar ways but at different paces. As Wasserman delved deeper into her neuroscience major, she felt more comfortable academically and more at ease in the Columbia community.

Rather than seeing themselves as less impressive or less academically able, they began to see themselves as the opposite. Sule reclaimed her power as a student-athlete, challenging herself to excel both on and off the track. By the end of her senior year, Wasserman felt confident enough to declare resolutely, “I know what I’m doing.”

However, both athletes faced other obstacles in completing their schoolwork, especially balancing work with the time commitment of sports.

“Being on the track team, it was like a full-time job,” Sule said. “Not only was I going to this rigorous school with these difficult classes that had me up until forever in the morning, but I also had to think about my job as an athlete.”

On weekends when Sule had track meets, she carved out time to do her work by staying up late at the library, even when her competitions required that she sleep for a certain number of hours.

Wasserman similarly balanced classes and a laundry list of athletic commitments which included stretching, core work, meeting with coaches, and running 50 to 60 miles per week. She spent the rest of her time attending class and doing homework. By the end of the day, she felt exhausted, which Wasserman used as motivation to refine her time-management skills.

“I remember freshman year, feeling like I’m so exhausted [that] I’m ready to go to bed at 10, [but] I still have so much homework to do,” Wasserman said. “But I think eventually, over time, I just figured out how to fit it all in and how to manage my time better.”

The difficult balance that Sule and Wasserman found between academics and athletics took on higher stakes as their athletic successes increased. Sule and Wasserman will go down in Columbia Athletics history for being two of 20 total female track and field athletes to qualify for the NCAA championships.

Sule’s journey to Nationals began the summer before her sophomore year, her self-proclaimed “breakout year.” Over summer 2017, she trained intensely to improve her times. Her hard work paid off the following academic year as she “ran a time that [she] didn’t think [she] would be able to run at all” in the outdoor 400 at the Ivy League Outdoor Track and Field Championships, finishing third with a time of 53.98 seconds. She earned Columbia’s fourth-best time in this event, enshrining her name in the Columbia records.

The finish also led Sule to Nationals, where she ran 400 meters on a relay team that qualified for the 2018 NCAA Division I Outdoor Track and Field Championships. At Nationals, the relay team finished with a time of 3:38.62, good for 19th in the country.

Wasserman’s bid at Nationals began her junior season when she consistently missed the national qualifying time by just a hair. That year, Wasserman’s mile hovered just above the 4:40 she needed to be competitive at Nationals. Wasserman and director of cross country Daniel Ireland recognized the feasibility and importance of reaching Nationals her senior year. Wasserman remembers Ireland telling her, “This is your last year. We’re gonna do whatever it takes to make it [to Nationals] this year.”

Wasserman finally got the time she needed, 4:40.29, at the Camel City Invitational in North Carolina. There, she competed against professional runners, an activity she described as “terrifying,” but she performed the best mile time of her career. However, her time did not guarantee her admittance to Nationals, since the qualifying times vary from year to year, with only the top 16 athletes in each event moving forward. Ireland told Wasserman that two out of three times her time would qualify for Nationals. Wasserman either had to play the odds or make a better time.

Wasserman played the odds and the 4:40.29 mile time qualified her for the 2020 NCAA Division I Indoor Track and Field Championships. She was preparing for Nationals when the coronavirus pandemic forced the cancellation of the event.

Unfortunately, in the days leading up to the competition, Wasserman received waves of bad news as a result of the mounting pandemic. First, during her last practice on campus, Harvard announced that it would be sending its students home. Then, on the plane to Nationals, the track and field spring season was officially canceled. Finally, on the day before Nationals, as Wasserman was practicing on the track, the event was canceled and Wasserman could not run her race.

Each development crushed Wasserman. The final blow—the cancellation of her event at Nationals—left her in utter shock. Only upon returning home did Wasserman begin to process the events.

“It was tough at first, obviously, but I’ve definitely tried to process everything now that I’m home and I’ve had time. My teammates have also helped me through the whole process for sure.”

For Sule as well as for Wasserman, their track and field careers ended prematurely as a result of COVID-19. An early end to Sule’s career meant she could not participate in her last spring season at Columbia, a year after winning outdoor track and field MVP. Pandemic-induced sports cancellations denied Wasserman a spring season and the opportunity to race at Nationals, a dream years in the making.

Despite the struggles they faced, the sacrifices they made, and the stigma they stomached, Wasserman and Sule insist that they would not trade their experiences at Columbia as student-athletes for anything.

“I wouldn’t give it up. I would lose whatever sleep I need to make this lifestyle work because it’s been so rewarding,” Wasserman said.

Sule came to the same conclusion.

“If I were able to redo it over again, I wouldn’t.”