The best triple jumper in Columbia history, senior Daniel Igbokwe, will graduate after a record-breaking career

The best triple jumper in Columbia history, senior Daniel Igbokwe, will graduate after a record-breaking career 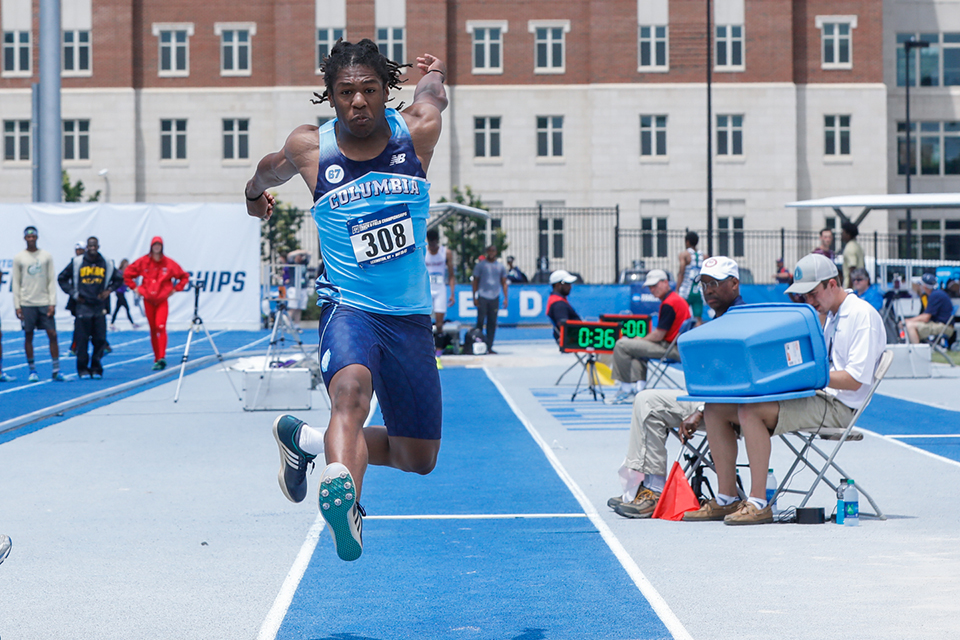 For Igbokwe, making Columbia history on the track was personal—breaking school records was synonymous with beating his own.

This is the eighth edition of “The Season That Could Have Been,” Spectator’s series on spring 2020 sports.

As he stepped into his sophomore year in track and field, coming off a season in which he repeatedly broke the school’s triple jump records, senior Daniel Igbokwe was projected to be the best triple jumper in Columbia history. In his four years at Columbia, Igbokwe continuously improved his jumping distances—increasing his jumping length by a foot in one year—and competed on increasingly competitive stages, culminating in his 2019 Nationals bid. Every step of the way, he focused on breaking personal records, vowing not to put any limits on himself in his early career.

“I shouldn’t put a limit on myself,” Igbokwe said. “I realized, don’t limit what you think you can jump.”

For Igbokwe, breaking personal records inevitably meant breaking school records. In his first year at Columbia, Igbokwe shattered the University’s indoor and outdoor triple jump records, only to break his own record for each again that same year.

By 2017, the athletic community began to recognize the extent of his athletic promise, and coaches publicly commented on his drastic improvement. At the Columbia Challenge in January of 2018, Igbokwe again broke his indoor triple jump record with a 15.53-meter jump—an entire foot farther than his previous record.

As Igbokwe’s success heightened, so did his expectations for himself, as he viewed even greater objectives within his reach.

“I’ve got time to get where I want to go to,” Igbokwe said. “I’m trying to jump quite a bit farther.”

Not only did Igbokwe want to break more records, but in his sophomore year, Igbokwe aimed higher: to get his Trinidadian citizenship, compete for Trinidad in the Commonwealth Games, and make the World Championship team.

While he has yet to appear on a World Championship team, Igbokwe won his first Ivy League Heptagonal Indoor Track & Field Championships title in the triple jump as a junior, posting a 15.82-meter jump and breaking the school record mark once again.

That same year, Igbokwe set his all-time personal record in the triple jump, 15.88 meters, a distance that would initiate his trip to Nationals. The 15.88-meter jump qualified Igbokwe for the NCAA Track & Field Outdoor East Prelims; his jump at Prelims, in turn, qualified him for the NCAA Outdoor Track & Field Championships.

Igbokwe’s qualification for Nationals in the triple jump came as no great surprise. The track and field coaching staff had been priming Igbokwe for Nationals since his first sign of preeminence his sophomore year—if not his freshman year.

Nonetheless, the historical significance of his success could not be downsized, as Igbokwe became the second-ever Columbia male athlete sent to the national stage for the triple jump. At Nationals, Igbokwe jumped 15.14 meters, a lackluster jump by Igbokwe’s standards, but still the 24th-best in the country.

In his last year at Columbia, Igbokwe continued his prior success before the abrupt cancellation of his final spring season as a result of COVID-19. Although he failed to break another school record for the first time in his Columbia career, he continued to succeed by league standards, placing first in his event at several league competitions and securing his second straight Ivy League indoor title at Heps.

Nonetheless, Igbokwe will be remembered at Columbia for the records he broke and for the manner with which he broke them. He had just one competitor on the field—himself—and he constantly showed up to beat him.