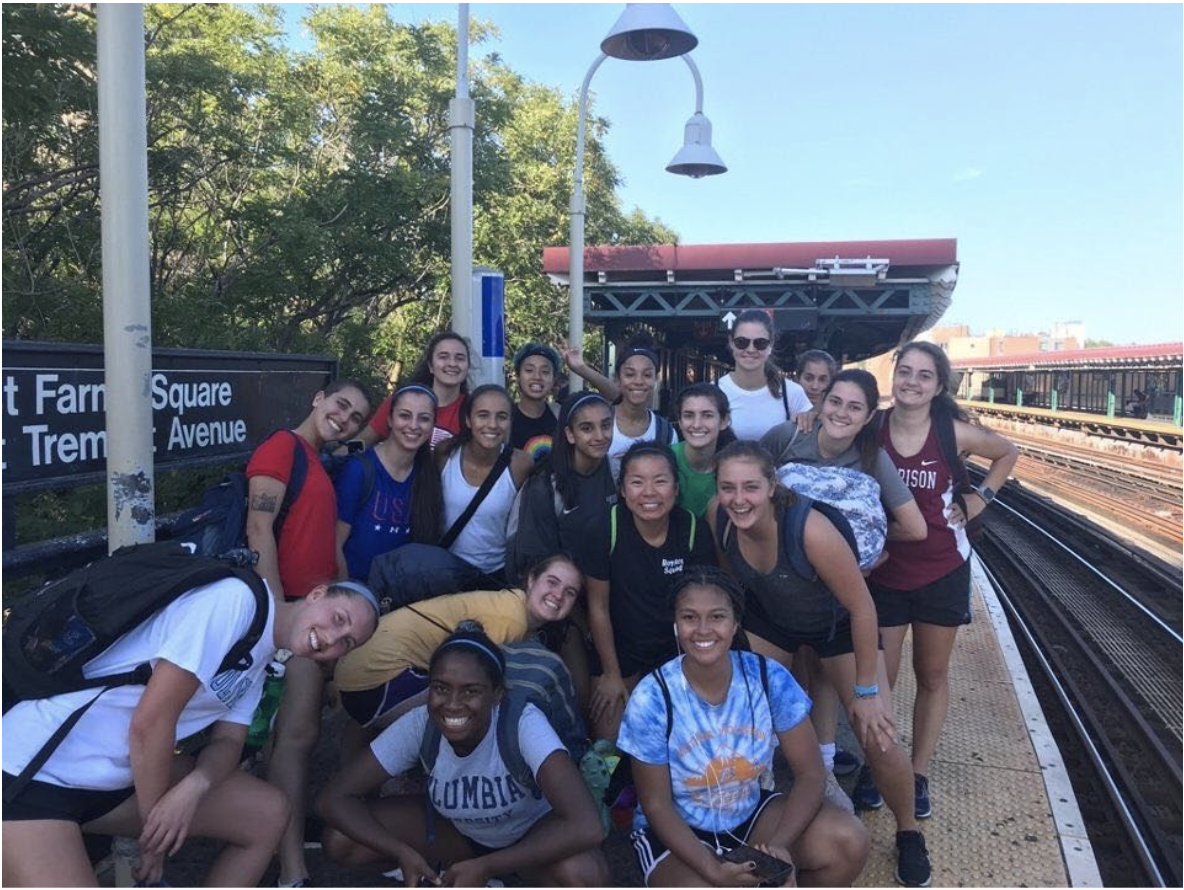 Like many students, first-year Alexa Schlotter hoped to join a club sport when she got to campus. Schlotter has played soccer since she was three years old, pursuing the game throughout high school. Despite not wanting the stress and time commitment of playing varsity soccer, Schlotter still hoped to participate in the sport at the club level.

However, her desire to continue playing the sport may be left unfilled. Since the University mandated that all students on campus must social distance and wear a mask in public settings, club sports are anticipating that they will be unable to practice throughout the fall. Moreover, the Ivy League’s decision to postpone all sports competitions until at least January suggests that club sports teams will not be allowed to compete during the fall semester.

Although most club sport practices and competitions will be able to resume after the pandemic dies down, the future of the Columbia women’s club soccer team remains uncertain.

Women’s club soccer, which was formed in summer 2019, has not been given official status from the University due to club sports guidelines. The University’s club sports handbook specifies that “The club must not duplicate another club sport or a varsity sport, proposals to establish new club sports organizations that duplicate existing varsity intercollegiate sports programs shall not be permitted.” As a result, club sports teams with a pre-established varsity counterpart must operate without assistance from the University.

First-year Kate Strong is among many students who believe the varsity rule can sometimes deter people from joining the sport.

“I think if there is a lot of demand for a sport, ... then a team should be able to be formed,” she said. “I think [the varsity rule] ultimately discourages people from joining because ... there’s so many hurdles you have to overcome: financial, travel, time.”

Despite the varsity rule, Columbia has both varsity and club volleyball teams, tennis teams, and archery teams (although varsity archery is all-women while the club team accepts all genders) as these club teams were grandfathered in.

The vast majority of students cannot play at the varsity level due to a lack of skill or time concerns. For many students who need to work to cover the steep cost of attending Columbia, the frequent practices and traveling required for away games prevents them from even considering competing at the varsity level.

For club sports that are not recognized by the University, such as Columbia women’s club soccer, the routes to recruit both players and sponsors are extremely limited. These teams are unable to advertise on campus, use the Columbia logo on their jerseys, and receive funds from the University. The price of transportation, equipment, and uniforms must be covered by the team itself. Columbia women’s club soccer sold T-shirts and baked goods in order to raise the funds they needed. The disadvantages faced by unrecognized club sports have only been exacerbated by the pandemic.

Club men’s soccer has similarly sought recognition from the University for years. According to Director of Physical Education Jeffrey Ryder, the varsity rule exists so that resources can go to more obscure club teams. However, according to a member of the Club Sports Governing Board, funding is not static and new clubs do not strip funding from preexisting teams.

Due to the varsity rule, students who wish to participate in soccer in a group officially recognized by the University must either reach out to the coach to become walk-on athletes or participate in the soccer physical education class—which does not allow for students to compete in the same way that a varsity or club team would. Another option for students is to join an intramural league around the city, which can be extremely pricey and often does not offer scholarships.

Moreover, at Columbia, teams that offer a walk-on process do not publicize the routes and requirements to join the team, leaving those who want to participate scrambling on their own for answers.

Columbia is the only Ivy League institution that has a counterpart varsity rule. Harvard men’s club soccer has enough resources to support an A team and B team. But at other Ivies, there are some stipulations for club teams with varsity equivalents. Brown University recognizes equivalent club teams but restricts them by labeling these teams as Group B “Competitive” status, rather than Group A “Highly Competitive” status. Group B teams still receive funding but face restrictions such as being limited to two practices per week.

Gabriel recounted attempting to communicate with Brian Jines, the director of intramural and club sports, only to be “brushed off.”

According to Gabriel, she asked Jines about the purpose of a rule that created roadblocks to students actively trying to improve student life at Columbia. He allegedly responded that the rule stood as is and that Gabriel was not the first student to try to change it. According to Gabriel, Jines proceeded to hang up on her.

Jines was unable to be reached to confirm or deny this account.

“I was definitely super annoyed, just because I think a lot of the administrators ... really don’t see the value in treating students nicely,” Gabriel commented about the encounter with Jines.

Despite the challenges she faced, Gabriel attempted to form the team, even without the approval of the University. At this stage, she was also met with another dilemma: a lack of funds.

In order to combat the team’s nonexistent funds, she asked each player to pay an $80 due.

“I obviously recognized that not every single player could afford the $80 dues for the semester,” Gabriel said, but if students could not pay, “we offered financial aid, which meant that money was coming out of my pocket since we didn’t have a large pool of money we could just draw from.”

Gabriel, who is on financial aid from the University, said the process was not sustainable for her. As a result, the team had to cut back on some essentials; they received rides to games from parents of players, only took 21 students to each game, and purchased the cheapest forms of all equipment.

Despite all the obstacles they faced, Gabriel and her team of 35 players were able to play five games and qualify for a local league. Although Gabriel was happy that she was able to start the Columbia women’s club soccer team, she is concerned about the group’s future.

With the restrictions due to the pandemic, Gabriel is not sure what the future of Columbia women’s club soccer will look like. Although she no longer serves as captain of the team, Gabriel, along with many other students, still views the varsity counterpart rule as a challenge to student life on campus.

Strong’s views reflected the beliefs of many.”If you’re battling for your sport to even be recognized,” she said, “I think [the varsity rule] can discourage a lot of people from putting in the effort, which ultimately hurts student life.”