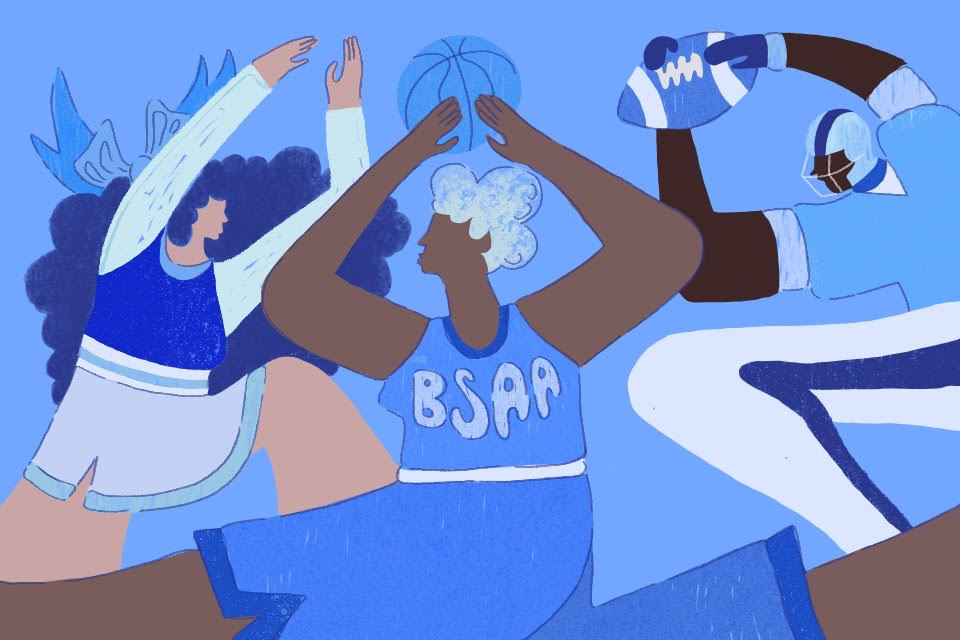 During the height of racial injustice protests across the country, a group of Columbia student-athletes formed the Columbia Black Student-Athlete Alliance. Founded in September, the BSAA aims to provide a space for members to form a safe community.

During the height of racial injustice protests across the country last September, a group of Columbia student-athletes decided to form the Columbia Black Student-Athlete Alliance. The BSAA aims to provide a space for members to come together, reach out to the community, and educate their peers about the challenges they face as Black student-athletes.

“We just want an environment where we feel comfortable being our truest selves, no matter what, no matter what we are,” said BSAA co-founder and co-president Paul Akere, who is a junior and defensive lineman on the Columbia football team.

The BSAA started with a GroupMe chat. Now, with around 70 members, the group regularly meets over Zoom. For BSAA members, these meetings provide an important space for Black student-athletes across different Columbia teams to come together in a casual setting. According to Madison Hardy, a member of the BSAA’s executive board and junior guard on the women’s basketball team, Black student-athletes can “see each other in the gear, [but] it’s hard to … take that jump and just kind of connect.”

Hardy and Akere also said that the BSAA provides a place for Black student-athletes to share strategies about how to address conversations about racial injustices with their teams. Different teams have approached conversations around race differently—some hesitantly and others head-on.

In Hardy’s experience, the women’s basketball team opened up in the summer and had meaningful conversations regarding race. But not every team was as direct, so people who attended BSAA meetings were able to draw from Hardy’s experience to improve their own teams’ conversations. For instance, when Akere learned that women’s basketball debuted a mentorship program with kids in Morningside Heights, Harlem, and Washington Heights, he decided to try to “implement something similar with the football team,” which makes him “really excited for the future.” He also drew inspiration from the men’s basketball team, which recently raised $28,000 for the New York Urban League, a local civil rights organization.

The group also speaks with the Columbia administration and Athletic Director Peter Pilling on a bimonthly basis. This relationship, Akere and Hardy said, has been productive and validating.

“We’ve been really happy with the relationship we have,” Akere said.

According to Hardy, both sides are comfortable addressing what the BSAA likes and what the BSAA thinks can be improved within the athletics program. This communication is helped by the BSAA’s two “adult supervis[ors]” that help with the administration—Marquise Stancil, who is an assistant coach for track and field, and Arielle Robinson, Columbia Athletics’ assistant director of enrichment services.

These conversations have led to some substantive changes. In October, the BSAA met with Dr. Keoshia Worthy, a clinical psychologist with Columbia Health, to talk about mental health, especially in Black communities. In meetings that followed with Pilling, the executive board pushed for more mental health resources for Black student-athletes. Now, according to Akere, “we [have] started seeing a lot more of the resources that are being offered by Dr. Keoshia Worthy … tailoring to the student-athletes to help them.”

“It’s kind of not uncommon to say like, ‘Oh, they got in because they play basketball,’” Hardy explained. And even though she knows it’s not true, the feeling is “definitely, definitely intimidating from a student-athlete perspective.”

Akere has had a similar experience. When he stepped onto campus as a first-year, he was warned by his teammates, “You shouldn’t always wear your athletic gear … because you can get a really bad rep really quickly.”

And when issues of racial justice come to the surface, as they did over the summer, there is another feeling of “not really knowing if your white peers are going to understand,” even within athletic teams. “It’s just a lot of imposter syndrome,” Hardy said, and it’s helpful to know “we’re not alone [and] this is also something we can kind of combat.”

Both Hardy and Akere are working so that first-year student-athletes can rely on the BSAA as a resource at the start of their Columbia careers.

“Being in a community like the BSAA,” according to Akere, means talking with each other to “navigate the stereotypes we definitely feel but that are not always spoken about.” In the future, Akere wants these conversations to expand. He wants to see more Black student-athletes and their peers involved, and he wants to see more work with other campus groups to help their communities. He ultimately hopes to hold a BSAA event with all Ivy League institutions.

“We can … create something pretty beautiful,” he said.