Despite challenges posed by pandemic, athletes find ways to train and stay connected

Despite challenges posed by pandemic, athletes find ways to train and stay connected 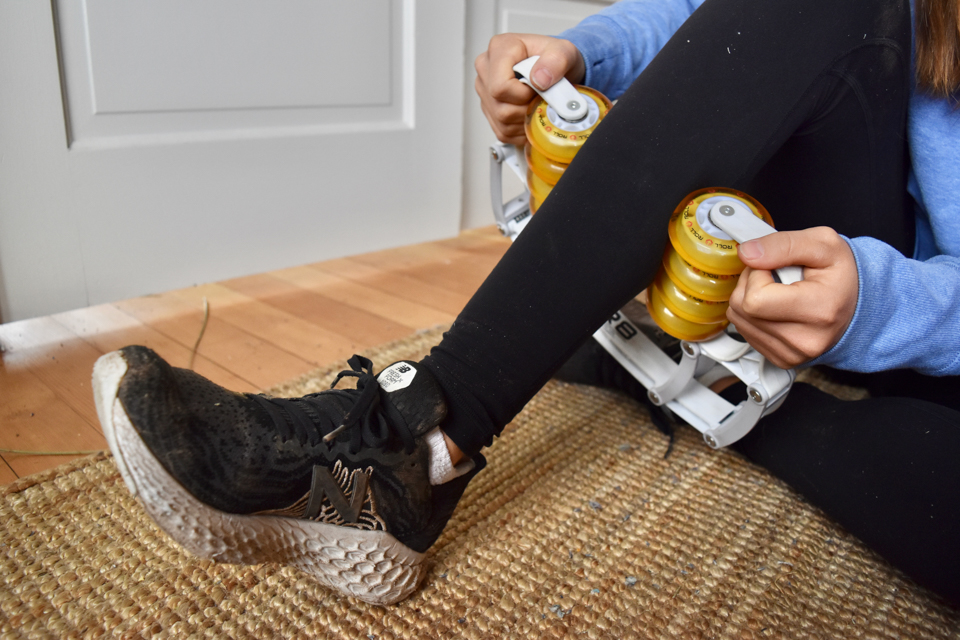 With no sports this academic year, athletes have been forced to trade their respective playing fields for Zoom meetings and at-home training.

Editor’s note: Several of the athletes were interviewed before the Ivy League made the official decision to cancel the spring sports season.

The early spring is typically a busy time at Columbia Athletics. With spring sports beginning competition, it would be common to hear the sounds of weights dropping at the Dodge Fitness Center, the screeching of sneakers across Levien gymnasium, or even the occasional crack of the starter gun at the Armory.

This year, Columbia Athletics has looked different. With no sports this academic year, athletes have been forced to trade their respective playing fields for Zoom meetings and at-home training.

“There weren’t many outbreaks, so [it looked like the prospect of having a season was] very promising,” senior softball player Max Ortega said. “So, knowing that [a lot of my friends] were playing and we still haven’t had a decision was really discouraging and deteriorating as a student-athlete. They are playing it safe for sure—being too safe is never a problem—but the lack of communication didn’t seem fair.”

For Ortega, the loss of another season was both unexpected and heartbreaking.

“When we heard [the news], it was kind of [peaceful], because we were able to at least go on now and figure out what we were going to do after this, but it was really hard to hear that, knowing that a lot of friends that I’ve played with before are able to still compete.”

Despite the disappointment of losing another season due to COVID-19 restrictions, teams have found ways to stay connected. For some, this has meant more team Zoom calls and, for spring athletes especially, at-home workouts to prepare for the possibility of getting back in action, even if only against outside-of-conference opponents.

For senior Maria Pagane and sophomore Megan Ryono, who are both softball players, the shift to online team building and training began last March, when, like other spring sports teams across the country, their season was abruptly cut short.

“The Ivy League was the first conference to make a definitive decision about what to do for sports,” Pagane said, “So I remember when they announced the cancellation of the season, I had all my friends at different schools that played sports reaching out to us saying like, ‘Oh my gosh.’ It was horrible.”

Many athletes had anticipated the Ivy League’s recent decision to cancel spring sports. Still, Pagane expressed mixed feelings. On one hand, seeing other conferences play while the Ivy League does not is “weird.” On the other hand though, she explained that the safety of potential competitions and group practices was something that she had yet to consider. “I don’t know my comfort on playing right now—if I would want to, or if I wouldn’t—so I understand why the Ivy League is making the decision they are,” Pagane said.

Despite the uncertainty these athletes have faced, many have quickly adjusted to meet the demands of their current situations. Randy Brumant, a senior on the men’s basketball team, has focused his attention on finding ways to build team chemistry virtually, including weekly Zoom meetings.

“We were forced to communicate and be a team in other ways,” he said.

The softball team has taken a similar approach to their time off. Buy-in from both players and coaches has been crucial to the success of their team bonding.

“We’re not really focused on playing right now. A lot of our team meetings right now are just working on chemistry,” Pagane said. “The older girls in our team have really bought into [it], but that’s more stemming from our coaches. I think they’ve done a really good job.”

Teams have also been forced to find new ways to train and remain in shape.

Some teammates have been able to form off-campus pods, giving them an opportunity to train safely, according to NCAA regulations.

“There’s a lot of people on campus, and [there were] a lot of parks that still had their hoops up thankfully in the fall,” Brumant said. “Then as it started to get colder, we were thankfully able to access a few gyms, every now and then. We just like organizing our own [scrimmages]. It’s obviously not as good as being able to walk into [Levien] any time you want, but I feel like it’s been getting a little better, slowly but surely.”

In addition to the scrimmages and the limited on-court practice, teams have turned to at-home workouts.

“We’re a big lifting team,” Pagane said. “So that was a big adjustment, not having access to weight[s]. It’s been a lot of more creative stuff trying to stay in shape. That comes with outdoor workouts a lot, so with the cold, it’s been kind of hard to adjust, but it makes you get creative, and it makes it fun to work out and try to come up with new things.”

For Ryono, being back home in Huntington Beach, California, has provided her with the opportunity to approach training a little more traditionally.

“The good thing about being at home in California is that we have pretty decent weather, so I’ve been able to get outside,” she said. “I have access to my old field here, so I’ve been working out, softball-wise, there. That’s been really nice, and I’m really fortunate to have access to that field to get specific softball work in hitting and fielding, and throwing. And I was able to put together a home gym, so I’ve been doing workouts out of my garage, which is nice too.”

While the feeling of losing another season is painful, Ortega is finding the good in the situation.

“It’s all kind of just bittersweet,” Ortega said. “Just an overall mood of being naturally disappointed, but it’s also kind of nice that getting us all together kind of keeps everyone motivated … especially with the seniors and being with the freshmen.”

Despite the challenging circumstances, athletes are excited to get back to competing and are optimistic that they can pick up where they left off. However, the competition will have to wait.

“We left off at a great place,” Ryono said. “Yes, we did lose a very important and amazing senior class. But seeing the freshman class this year coming in, I’ve seen that they’re very hungry, they’re very ready, and they’ve bought in. And that makes me very optimistic about … future seasons.”