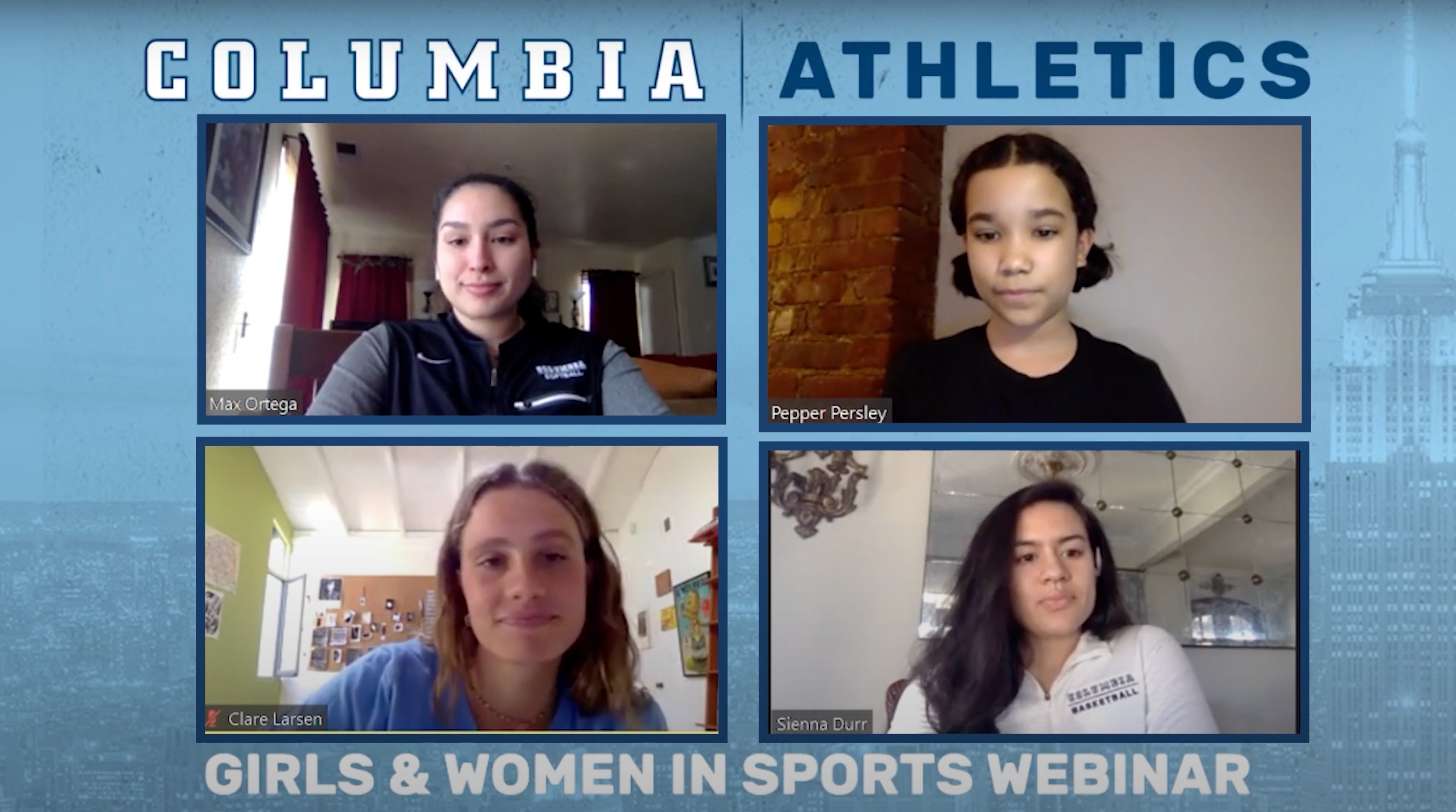 In a Feb. 24 Columbia Athletics webinar about women in sports, nine-year-old Pepper Persley, an aspiring WNBA player, interviewed the three athletes about their experiences as women in athletics.

As a child, junior swimmer Clare Larsen loved to play sports. Despite her passion, however, she always thought of sports as a boys’ world, and the male-dominated culture initially discouraged her from chasing her dreams of Division I recruitment. The message from people around her, Larsen said, was that “sports are healthy for a young woman, but [they’re] not necessarily something that you pursue.”

These discouraging sentiments are a shared experience for many women in sports, including Larsen, junior basketball player Sienna Durr, and senior softball player Max Ortega. In a Feb. 24 Columbia Athletics webinar about women in sports, nine-year-old Pepper Persley, an aspiring WNBA player, interviewed the three athletes about their experiences as women in athletics. The panelists highlighted the relationship between a lack of media representation of female athletes and a toxic culture for women in the sports world. When girls were younger, Larsen said, if they did sports seriously, they were in the same social sphere as the boys. Since boys are often seen as the only ones pursuing serious college or professional careers, many athletic women feel excluded from the sports world as a whole, especially as children.

Larsen, for example, had an active childhood and an encouraging father who had also been a student-athlete. Despite these factors, she only started thinking about recruitment during her junior year of high school. Part of this was due to a culture that treated women’s athletic achievements as less important than men’s—even back in elementary school gym class, she said, “when people were picking teams, the guys got picked first, and then the girls got picked.”

For Larsen and Durr, female role models in athletics were one of the primary ways they fostered a passion for athletics. The U.S. women’s national soccer team received a lot of coverage, and Larsen and Durr both started their sports careers as soccer players partially because of this coverage, even though both athletes chose not to pursue soccer long-term. They idolized USWNT legend Abby Wambach. She gave them their “I wanna be like Mike” moments, serving as a crucial role model in the development of their goals as athletes.

Durr grew up in a different position than Larsen. Both of Durr’s parents were student-athletes, and they had encouraged her to become a college athlete for as long as she could remember. Durr’s mother ran track in college and actively sought out women’s events for Durr to watch. She played a big role in shaping Durr’s mentality as an athlete.

“Luckily for me, even though on TV and in the media that’s not what they were showing all the time, I still had women role models to look up to and know that’s what I can strive to do,” Durr said. “Just because I’m not seeing [women athletes] on my TV doesn’t mean they aren’t out there.”

Durr benefited from real-life female role models, she said that she found her own confidence in being around fellow women athletes. For other kids who lack these real-world examples, however, the lack of media coverage of women’s sports can have a real impact. The influence can be especially detrimental to boys, Durr said, who may begin to believe that there are not any strong female figures in the sports world. Boys, Durr said, form their vision of basketball around the hyper-physical male games they watch on television.

So when Durr broke record after record in high school, she said that boys dismissed her achievements because they saw her competition as inferior to the men’s basketball games that they watched all the time. They viewed Durr as not as good as the players on the boy’s teams who could jump higher and dunk, whether or not they also were breaking records.

Boys often taunted Durr that they could beat her one-on-one, but when she accepted their challenges, they would make excuses, knowing she was better than them. These challenges were eye-opening for Durr, who said that it can be discouraging when girls put in just as much effort as boys but are not rewarded with the same respect and praise.

“Most of the time when people make comments like that, you just have to brush it off,” Durr said. “When you compare what I’m doing to other people in my group, I’m successful. Are [the boys] successful? Are they playing college basketball?”

Some athletes like senior softball player Max Ortega face more significant challenges because of the logistics of their sports. Although Ortega and her sisters all play college softball, they mostly watched the MLB growing up because softball just was not shown as frequently on TV. Similarly, very few softball players can go professional after college because of financial impracticality. As a result, according to Ortega, young softball athletes are often viewed as participating in an extracurricular rather than chasing a professional dream. Softball is nearly nonexistent in the media when compared to baseball, and this means that Ortega often needs to educate her doubters about what softball really is.

“They usually say the ball is softer. I’d say, ‘Would you like to get hit by one?’” Ortega said. “I usually say [softball] is more exciting because it is a faster paced sport. … The ball is being released a lot closer to you, so you don’t have much time to react.”

Despite growing up in a softball family and the presence of a viable role model in Jessica Mendoza, former professional softball player and current ESPN announcer, Ortega said that softball still felt like a sport that she could not pursue.

Ortega’s biggest takeaway from her athletic career is that education will take her much farther than softball would, Ortega said, especially given the difficulties of pursuing softball as a professional career.

“As a child, it’s such a dream to go to a big school that’s sports oriented,” Ortega said. “That dream slipped off knowing that my education is going to be what takes me, unfortunately, throughout my life, and I couldn’t make a livable salary being a professional athlete.”

Although playing softball professionally remains a faraway goal for even the best college players, some women have made a big impact on the management side of baseball. Last year, Kim Ng of the MLB’s Miami Marlins became the first women in the American professional sports industry to become the general manager of a team, and Ortega’s idol Mendoza currently works as an MLB game analyst for ESPN.

Ortega said it is crucial for women to be in the spotlights of the sports world and for their achievements in sports to be covered by the media..

“It’s amazing to see that [Ng] can do that,” Ortega said, further emphasizing the importance of women making headway into male-dominated fields both in the sports industry and beyond.

Ortega noted that after graduation, prominent female athletes have often had difficulties transitioning into work as non-athletes. Now, however, the increase in opportunities and representation in areas such as management and broadcasting offer athletes a new mentality. It reminds them that all those years of playing sports were worth more than just being a “healthy” kid.

Pepper may be inheriting a different culture around women in sports than current college athletes did. Although Durr currently plays Division I basketball, she did not start watching the WNBA until late in her high school career. In contrast, Pepper spent part of this summer interviewing WNBA players.

She said that having conversations with older women athletes has been extremely helpful in becoming more confident in sports. She told the three of them to try to put themselves out there for young girls to see.

“I really feel nervous that when I search and find [women athletes on the internet], I’m going to find nothing, and that’s just going to be more disappointing than not actually knowing [any women athletes],” Pepper said. “We just need one more push to get representation of women out there.”

Larsen had one more piece of advice to give Pepper on approaching sports: “Sports are not a boys’ thing. Everyone is able to push their body in different ways.”