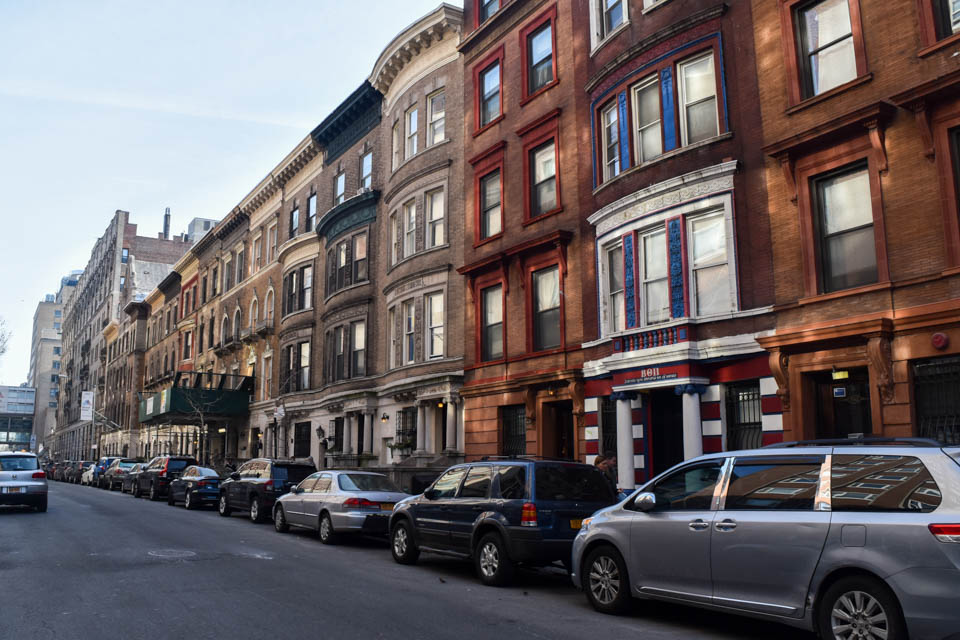 If you signed up for 2018 sorority recruitment back in December, you might be wondering what comes next. You’re not alone—in fact, you’re one of about 450 Barnard and Columbia “PNMs,” or “Potential New Members” (see our glossary below), who will be going through recruitment this week.

In order to help you prepare for the selection process, Spectrum has compiled a guide to the ins and outs of Recruitment Week, 2018 edition. We sat down with Sarah Klena, GS ’18, the outgoing Vice President of Recruitment for Columbia Panhellenic, Lynley Matthews, CC ’19, the incoming President of Columbia Panhellenic, and Yvonne Pitts, TC ’15, the current Assistant Director of Fraternity and Sorority Life and Advisor for Panhellenic Council, to get as many of your potential new questions (PNQs?) answered as we could.

Glossary: Talk the talk at all your interviews

Rho Gamma: a member of a sorority who has temporarily disaffiliated in order to council PNMs through the recruitment process. They will typically have about 13 or 14 PNMs under their guidance, and their chapter affiliation will remain unknown to these PNMs throughout the week. “It’s really just to help PNMs be comfortable and have someone who’s gone through the process,” Klena explained.

PNM: a Potential New Member: a student who’s not yet affiliated with a chapter and is interested in becoming part of the fraternity/sorority community here.

Bid: an offer of membership extended to PNMs at the end of recruitment.

MRABA: an acronym for Membership Recruitment Acceptance Binding Agreement. As we’ll explain below, this agreement theoretically establishes the expectation that you will join any sorority whose bid, if you receive one, you choose to accept—but this doesn’t entail signing your life away. 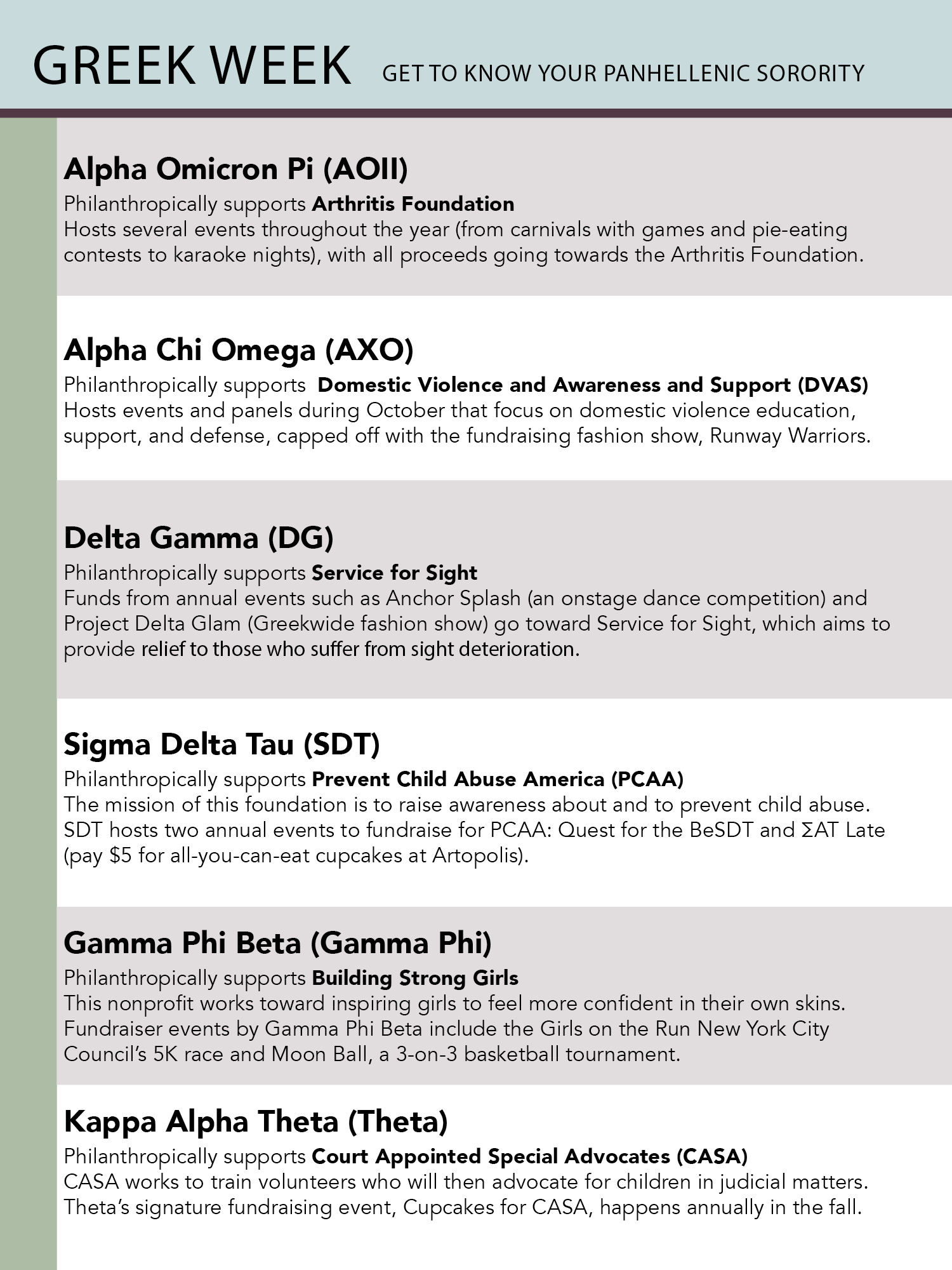 The Rundown: What to expect from each day of recruitment

One of the core elements of Greek life is participation in a philanthropic organization. To get a better sense of the chapters’ philanthropic missions, PNMs are asked to attend one 25-minute party—all of which will take place in Faculty House—with each of the six chapters to learn from current members about their chapter’s work.

You’ll also typically get to participate a little bit in the philanthropy, according to Klena: each chapter usually asks visiting PNMs to take part in a small craft activity, which varies from chapter to chapter depending on their respective charitable affiliation.

You shouldn’t expect to be bombarded with speeches at the Philanthropy sessions; rather, Klena said, these days are a chance for PNMs to strike up conversations with current members.

At the end of the Philanthropy Days, you’ll “input your preferences,” meaning that you’ll select four chapters that you felt were the best fit for you.

Each chapter chooses a discussion theme for its Development Day event, and the gist is for sisters and PNMs to get to know each other through conversations around that theme—whether it’s simply “sisterhood” or something more abstract, like “growth.”

The Development Day parties run longer than their Philanthropy Day predecessors, at 40 minutes each. By this point in the process, a PNM will not attend parties at all six chapters, but rather at only four of the chapters to which they will have received an invitation the previous night.

Matthews stressed the importance of attending as many of these parties (up to four, which is the maximum) as you received invites for, so you’ll want to reserve at least four 40-minute blocks (a total of two hours and 40 minutes) for mingling on this day of the process.

At the end of Development Day, you’ll be inputting preferences again—but this time, you’ll also put down four chapter names, in the order of your personal preference.

This is where things start to get a little emotional, according Klena. “People seem to really like Preference Night,” she said—it allows both sisters and PNMs to open up a bit in more in-depth conversations.

Having put in your preferences on Saturday (Development) night, you’ll receive invites from some of the four sororities that you visited that day. For Preference Night, you will be allowed to attend up to two chapters’ events, each of which will last 60 minutes and consist of a more interview-style conversation with a current sister.

“They’ll really open up to you about what their chapter has meant to them,” Klena said of sisters conducting the conversations with PNMs on Preference Night. “It’s very personal. There’s always kind of a hush when people come out of Preference Night.”

Like the events on the Philanthropy and Development Days, these events will all take place in Faculty House. Following your conversations at the Preference Night parties, you’ll also get to sign your MRABA—which, Klena assured us, isn’t like signing your life away to Panhel. It represents a commitment to any sorority whose bid you accept the following day, but should you choose not to accept any bids, a MRABA forbids you only from going through formal Panhellenic recruitment (at any institution) for one full calendar year.

During the day on Monday, PNMs will head to Wien Lounge to pick up their bid cards and find out where they’ve been offered membership. At 8 p.m. sharp, the celebrations for (no longer “Potential”) New Members will begin.

While a lot of the practical information about Bid Night is going to depend on which bid—if any—a PNM accepts, the basic idea is to meet your new sisters and celebrate together. There’s singing, chanting, and a lot of hugging—and you can party for as little or as long as you’d like.

Clearing it up: common misconceptions about Recruitment

1. Misconception: you need to dress to the nines for an entire week.

“The dress codes are really more guidelines,” said Pitts. “Wear what makes you comfortable—you don’t need to put on every designer item you own… It really isn’t necessary.” Dressing for comfort, all three interviewees stressed, is key. “You will be on your feet for a long time,” cautioned Pitts. “People love to break out their highest pair of heels, and I just feel bad.”

2. Misconception: everyone gets a bid.

Some PNMs may not receive bids following Preference Night, and some may drop out of the process midway through the week. This is a rarer occurrence, according to Pitts, however—the process is structured to pair PNMs with a chapter that they will mesh well with. “If they (PNMs) go through the process in its entirety, more often than not, they should get a bid,” said Pitts.

3. Misconception: you don’t have to go to every party you’re invited to.

“Parties aren’t optional,” according to Matthews. And your best bet for getting to know the maximum number of potential future sisters is, indeed, to go to as many events as you can and strike up conversations at all of them.

4. Misconception: you should aim for a certain chapter to the exclusion of other possibilities.

You might be tempted to place all your eggs in one basket—that is, consistently attend the events of, and write down your preference for, a single sorority that you have your sights set on. This is what Pitts referred to as “single intentional preferencing,” and she (and Klena and Matthews, for that matter) advised strongly against it.

“I’ve actually seen it work to students’ disfavor, to only put one down,” she recalled. The takeaway: keep an open mind, and, as Pitts said, “maximize your options.”

A final piece of advice

“It’s cheesy to say ‘be yourself,’ but… people really should be their authentic selves,” said Pitts. “They should understand that they don’t have to put on a façade or a front to get into whatever they think is their favorite sorority.”The main thing you should keep in mind throughout the process, according to Pitts, is that Greek life membership is long-term—so being yourself will bring you closer to a community of friendships and networking opportunities that you’ll benefit from in the long run.

“It’s a sisterhood, not a club,” she emphasized. “I think PNMs often think they have to act a certain way, or talk about certain things to be invited back to a sorority. But if they just were their authentic selves, whatever that is for them, they would have a much easier and more relaxed time navigating the recruitment process.”