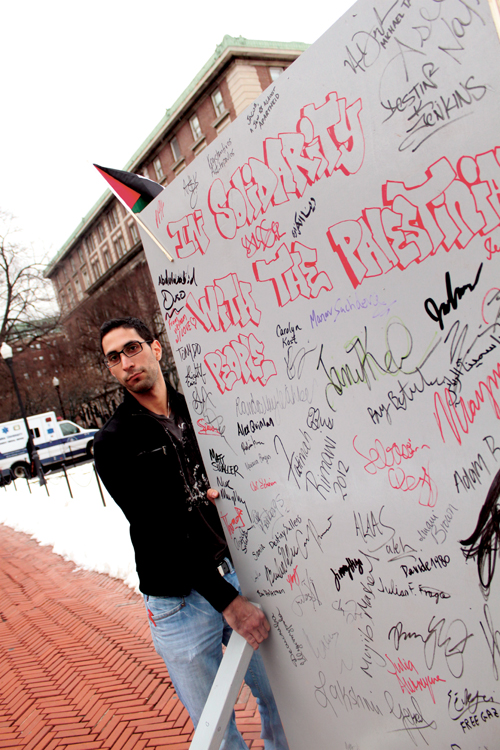 Students for Justice in Palestine mounted a mock wall to symbolize the separation between Israel and Gaza.

There is no wall separating the organizers of Israeli Apartheid Week and Peace Week on College Walk, but the lines in the cobblestones are clearly drawn. This week marks Israeli Apartheid Week, an international period of programming on college campuses intended to call attention to what its supporters call human rights abuses committed by the state of Israel against Palestinians. Its countermovement, Peace Week for Israelis and Palestinians, will also be taking place on campus this week, which is an initiative they say is geared towards establishing peace for Israelis and Palestinians. Both parties will be fliering and demonstrating on College Walk, as well as hosting events throughout the week. Organizers of Israeli Apartheid Week have constructed a mock wall on Low Plaza meant to represent the wall running through the West Bank, while the organizers of Peace Week—the Israel Committee, LionPAC, Just Peace, and Garin Lavi—are displaying signs, some of which feature hypothetical questions asking students how they would react if locations such as John Jay and Koronets were blown up by terrorists. Loren Berman, GS/JTS '12 and LionPAC member, said he spent three hours at the mock wall having a discussion with members of Students for Justice in Palestine about Israel's claim to the West Bank. He spent the rest of the afternoon fliering for Peace Week. Alaa Milbes, GSAS '11 and an organizer of Israeli Apartheid Week, said that most people who have approached her have been polite, respectful, and interested in starting up dialogue, with just a few exceptions. "I was approached by a couple of people who called me a terrorist. They said things like 'watch out before she blows you up.' But the majority of the interactions with people have been positive. While Berman said the discussion he had with SJP was open and interesting, he said the mock wall could be misleading to students. "A blatant visual like this can be a disservice to Columbia students, because it's given without context," he said. "You don't scrutinize global warming by saying, 'Look, it's been the coldest year ever.'" On other college campuses—such as the University of California, Berkeley and UC-Irvine—Israeli Apartheid Week takes on a much more hostile tone, with mock gravestones, checkpoints, and in some cases, fighting and rioting among students who stand at different ends of the political spectrum. Michael Shapiro, GS/JTS '12 and vice president of LionPAC, said he has been grateful to see only peaceful rallies and relatively friendly conversations among Columbia students with differing views. "I think Columbia is very proud and protective of [the] First Amendment and freedom of speech," Shapiro said, adding that Iranian President Mahmoud Ahmadinejad's 2007 visit to campus is proof of that. "The last thing we want to do from our side is infringe on freedom of speech." At an Israeli Apartheid Week event Tuesday night, Rahim Kurwa, GSAS '10 and a member of Students for Justice in Palestine, said that he hopes for students on the Columbia campus to continue to frame the debate around "basic Palestinian rights and the ways in which these rights are being denied." "Those who are victim of the apartheid of South Africa will say that their freedom is not complete without the freedoms of not only Palestinians but all oppressed groups. It's our job to keep every link of equality equally strong," Kurwa said. "When one link breaks, the chain is broken." "While Israel—as with all nation states—is far from perfect, to call for divestment from Israel equates it with Apartheid South Africa, an accusation that ... is factually inaccurate and malicious," the Columbia/Barnard Hillel executive board wrote in a statement. "Through this week of events, Hillel hopes to continue engaging in open and honest dialogue," the board added. Aleq Abdullah, BC '13, spent several hours holding a sign for Israeli Apartheid Week that quoted Mahatma Gandhi. "I came here expecting people to yell at me," she said, rotating the sign she'd written. "But so far, everything's been all good." One onlooker, noting what she described as a relaxed atmosphere from both parties, said, "This is actually pretty chill." Olivia Hollander, a prospective student who was visiting campus yesterday with a friend, said she had walked past the activities initially, but the mock wall caught her attention. "They encouraged us to hear both sides," she said, explaining that organizers of both events encouraged her to speak to organizers of the other event as well. Shapiro said that at the end of the day, both sides seem to be interested in promoting campus discussion, as well as with people who weren't sure on which side they stood. "The purpose of this event is to get to people who are in the middle of this issue," he said. "I think by setting up in the middle of campus, we can collect a broad, diverse group of people." Amanda Evans contributed reporting to this article. leah.greenbaum@columbiaspectator.com CORRECTION: An earlier version of this article said that the construction on Low Plaza was meant to symbolize a wall running between Israel and Gaza. It was intended to represent the wall running through the West Bank.