Tamasha fuses past and present in “Throwback” theme

Tamasha fuses past and present in “Throwback” theme 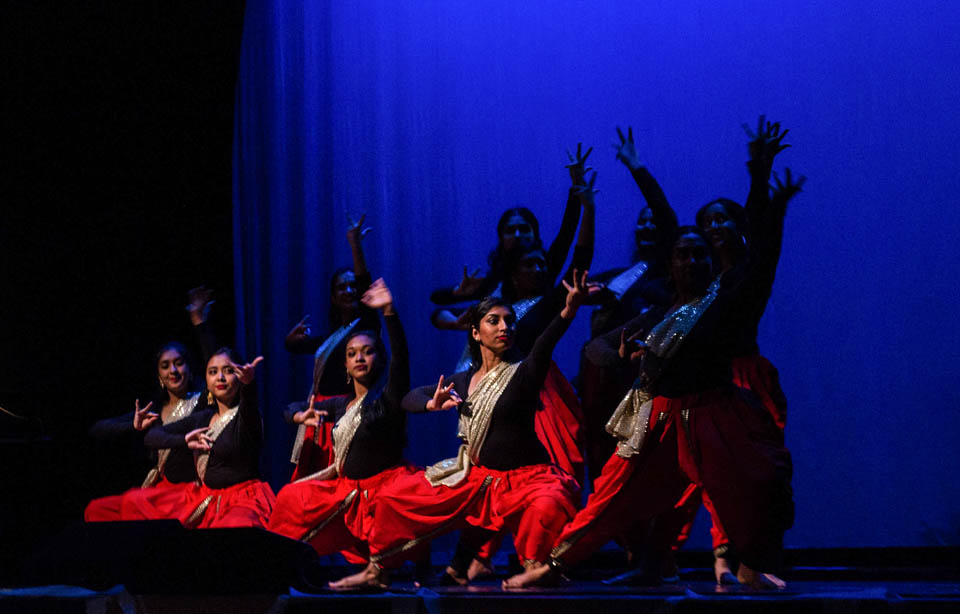 The show featured performances by dance groups Dhoom, Taal, Bhangra, and Raas, as well as Sur, an a cappella group.

In a nod to the previous generation, students hold up photos of their parents. They look down at their chosen image, then adopt the same poses as them.

They are even dressed in the same clothes. Some utilize props to better match the image. Two stuffed lambs, a handful of pencils, and a photo-original grey sweater, capture the essence of the past.

The recognition of the students’ lineage was central to the throwback theme of this year’s Tamasha showcase, an annual spring event produced by Club Zamana—Columbia’s South Asian students association—that fills the Roone Arledge Auditorium with students, alumni, and campus visitors of all backgrounds.

On Saturday, the show featured performances by dance groups Dhoom, Taal, Bhangra, and Raas, as well as Sur, an a cappella group. The theme of this year’s show, “Throwback,” was emulated through the inclusion of references to old Bollywood films, the use of students’ baby photos to advertise the show, and a video segment in which students dressed up to match old photos of their parents.

In addition to celebrating the work of student performance groups on campus, this year, Club Zamana chose to partner with the Desai Foundation, which organization leader Megha Desai, BC ’01, described as “an organization that empowers women and children through community programming to elevate health and livelihood.” Portions of the ticket proceeds from the event were donated to the Desai Foundation.

The show also included its annual freshman and senior segments, which serve as opportunities for anyone in the Columbia community who identifies as South Asian to join in the fun onstage in a class-wide dance. New this year was a middle segment for sophomores and juniors as well.

Club Zamana’s public relations Chair, Sophia Rasul Ahmed, CC ’21, said that the club wanted to “be able to show South Asian cultures through the ages, as well as how we as a diaspora have also developed over the ages.”

The performances showcased Bhangra, classical, and fusion styles of dance, among others. Many of the groups set their work around themes, including Raas’ energetic and delightfully prop-heavy dance set at the beach.

As the only vocal performance, Columbia Sur brought a cappella to the stage to perform a multilingual set toward the end of the evening.

Before intermission, Megha Desai came to the stage to speak about the Desai Foundation and its impact.

“What’s really exciting is that we give back to both here and the community in Morningside Heights and Washington Heights through our programming with Columbia’s community impact, as well as in rural India through our Asani program, which you guys have chosen to give back to tonight.”

The Asani program is the Desai Foundation’s menstrual hygiene initiative, which aims to offer employment to women in rural areas for the production and distribution of sanitary napkins.

“Sanitary napkins are not just an initiative around hygiene. It’s around economic empowerment, health, access to schools, and it is a whole 360 issue that really helps women and girls live stronger, healthier, more economically sustainable lives,” Desai said.

Club Zamana President Kriti Kumar, CC ’20, said of the program, “It’s great that we have this alumni connection to the Desai Foundation. And they’re helping out two different communities, so they’re helping out people in India and then also people here, in Harlem. And so it’s really great that we can cater to these two communities that we belong to.”

Kumar emphasized the importance of community within the club, a theme that was echoed by the chants and shouts of support which spread contagiously through the auditorium Saturday night.

“We’ve created this small little family for ourselves on campus, and I think that’s what matters most,” she said.

Belonging and community were central to Tamasha’s execution, as the bringing together of multiple student organizations into one large celebration served to emphasize the interconnectivity of Columbia’s South Asian community.

Correction: This article previously misidentified the allocation of proceeds from ticket sales. Spectator regrets the error.