Alumnae of color create space for themselves in the arts field, share their wisdom at Barnard

Alumnae of color create space for themselves in the arts field, share their wisdom at Barnard 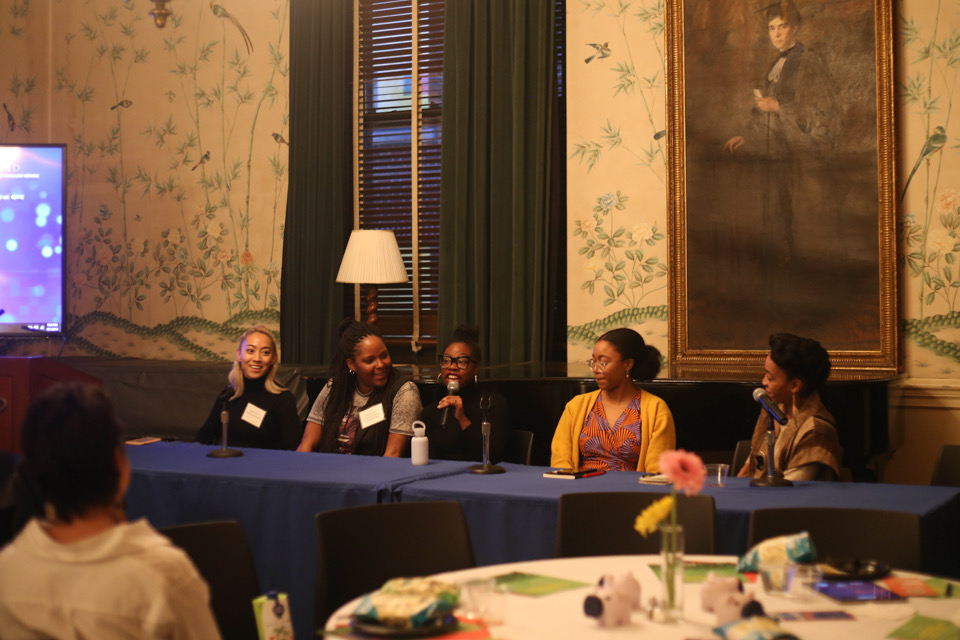 The panelists have pursued different career paths, but they all have stories illustrating the obstacles that WOC often encounter in the arts.

Ballet tights are pink, Broadway is the Great White Way, and artwork by white men dominates the walls of the Met. It is no secret that the arts have long marginalized women of color. On Monday night, five women of color pursuing careers in the arts, four of them Barnard alumnae, came to Barnard to discuss how they are making space for themselves in the field—and how aspiring WOC artists can do the same.

Hosted in Barnard Hall’s Sulzberger Parlor, “Conversations on Access and the Arts for Women of Color” featured dancer, choreographer, actor, and writer Djassi DaCosta Johnson, BC ’96; Nectar Knuckles, BC ’17, a curatorial fellow at the Museum of Modern Art; Abigail Kim, BC ’17, an associate executive at Fitz & Co.; Destinee Forbes, BC ’17, a storytelling fellow at The Laundromat Project; and Joyous Pierce, the administrative director of programs at the non-profit Harlem Arts Alliance. The event was presented by Beyond Barnard and Bold, Beautiful, Black@Barnard, founded by Phanesia Pharel, BC ’21.

The panelists have pursued different career paths, but they all have stories illustrating the obstacles that WOC often encounter in the arts. Johnson described an incident at a dance rehearsal where she was the only WOC onstage. The leadership thought her black skin didn’t look right under the blue colored lights—the woman of color wasn’t the right color.

“I was de-cast from a piece once because I wasn't ‘blue,’ and they couldn't see me on the videotape,” Johnson said.

In another rehearsal, the technician changed her lighting so she could be visible on stage and on tape. The incident was never spoken of again.

Knuckles related to Johnson’s struggle of being the only WOC in the workplace as she presented graphs, charts, and statistics that conveyed the dire lack of POC and WOC working in art institutions such as the MoMA. Those discouraging numbers, Knuckles explained, have tangible effects.

“When you are working in a predominantly white space, you really feel the numbers. When I'm walking around MoMA and I literally don't see myself in the people working there. ... It really is exhausting,” Knuckles said.

For the panelists, the challenges of being a WOC artist are compounded with the typical challenges of pursuing a career in the arts, including cutthroat competition and condescending attitudes towards artists that can pervade elite institutions like Columbia and Barnard.

“You're not necessarily going to walk into rooms where you feel applauded as an artist or seen as a woman all the time,” Johnson advised the students in the audience.

Nevertheless, she urged students to take advantage of their college years to explore who they want to be as artists and people, and to record their process of discovery.

“This is one of your most fertile times of self-realization. I hope you’re journaling,” Johnson added.

Forbes reminded students that, despite the challenges they will soon face as artists on a job hunt, it is important to relax and maintain a healthy perspective.

“When you're very young in your career, you're constantly hustling and grinding, and that's so exhausting. You need to take a step back and take things as they come,” Forbes said.

When opportunities arise for WOC in the arts, there are always questions about the employers’ intentions: institutions might believe that hiring one or two WOC makes the institution acceptably diverse and bolsters its reputation and ego. Knuckles’ fellowship, for instance, lets her work at the MoMA, which is a great opportunity for her—and the MoMA.

“There is something to say about being tokenized. I'm now at MoMA and I get to work on the black artist shows ... because they want to seem as if there are many of me existing in this space. They want to say, ‘look what we've done,’” Knuckles said.

Despite the frustration that persists even after WOC gain access to the arts, the panelists urged young WOC to be confident and make space for themselves when institutions don’t.

“I've been looking for spaces that are created for me instead of creating the space myself. Create that space, and people will come to you,” Pierce said, advising students to believe in themselves more than institutions.

To conclude the panel, Knuckles encouraged WOC to never be afraid to ask for what they want.

“The worst that you're going to get is no, and even if you are told no, you can ask why, and that might become yes," Knuckles said.