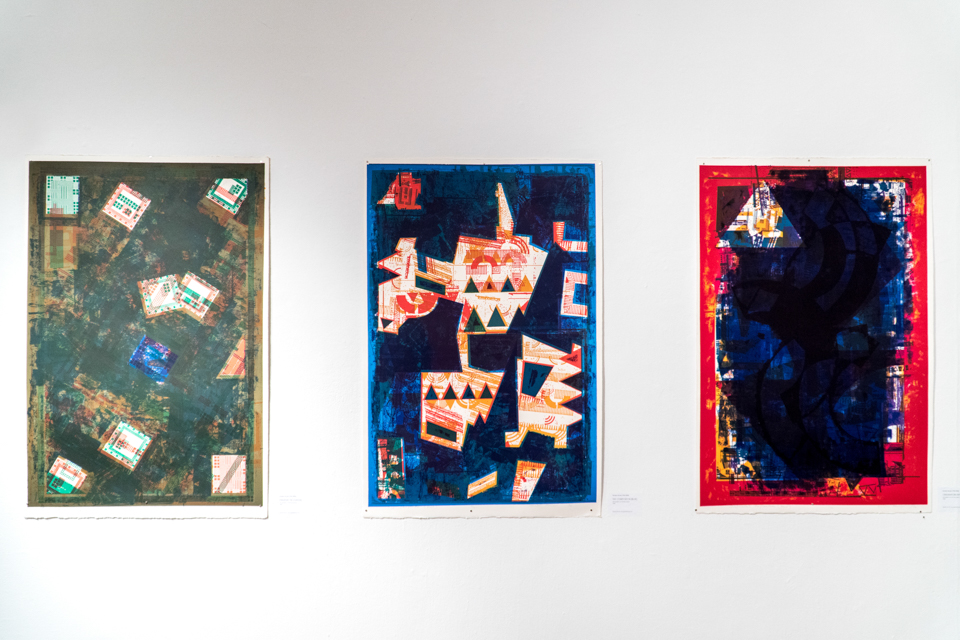 The exhibition displays 16 of House’s pieces, which include lithographs, screen prints, etchings, and vinyl sheets.

“He doesn’t know where he’s going with it, but it’s through the process of making that he finds something,” independent curator Josephine Rodgers said of printmaker Gordon House.

Although such uncertainty might not be what one would expect of a renowned printmaker and graphic designer, it’s that very uncertainty and willingness to experiment that launched Gordon House into one of the most interesting and influential printmaking careers of the 20th century.

The pieces were selected out of House’s full estate, which Gerrish owns and manages. In an interview with Spectator, Rodgers emphasized the rarity of having an artist’s complete body of work to curate from.

“He actually produced quite a bit of material in his lifetime, which is fun … We’re able to pick and choose,” Rodgers said.

With so many options at their disposal for the small exhibition, the team selected each piece with immense care and intention. In doing so, they attempted to trace the lesser-known fine art career of House, who was often better known for his commercial graphic design work.

In his commercial career, House became well-known in London as a typographer and graphic designer in the 1960s. He became especially famous for his work designing album covers, most famously the Beatles’ “The White Album” and “Sgt. Pepper’s Lonely Hearts Club Band.”

Rodgers invoked House’s fine art mentality in the commercial setting of album design, asking, “How do you see [an album] as a piece of artwork, not only the cover but also all of the inlet pieces it came in?”

It was this fine art mentality that inspired House to begin exploring abstract art through screen printing, which then immersed him in a number of mediums.

“He so beautifully illustrates such a wide range of techniques, but then also a devotion or obsession or kind of call to really push screen printing, etchings, and lithographs to a whole new level,” Rodgers said.

During House’s study of printmaking’s technique and process, the very processes he studied underwent a seismic shift.

“Throughout the course of his career, he notices how the process of typography is completely becoming automated, and so the craftsmanship that he had been taught was kind of completely obliterated when a machine could do it,” Rodgers said.

Although the significance of this shift in technique cannot be understated, House didn’t grow discouraged. Instead, he seized the new digital technology at his disposal in tandem with his more analog background.

“He was really on the forefront, taking new technology and experimenting with it and kind of pushing it in a way. I think artists are continually doing that today and re-experimenting with old techniques,” Rodgers said.

“[House] says, ‘We need to find new codes to follow,’ so that’s where the title of the exhibition comes from,” she explained.

The pursuit of “new codes,” or new ways of facing the ever-digitizing print world, is felt deeply by Columbia’s art students. House’s ability to fuse his manual training with the increasingly digital printmaking landscape serves as an inspiration to young printmakers at Columbia, who grapple with the overwhelming number of techniques at their disposal.

Considering the gallery’s three facets––a fine art gallery exhibiting non-Columbia artists, a place of teaching for undergraduate students, and a professional print workshop––displaying House’s works is more than just a stimulating curatorial feat. Instead, it is a means of imbuing in Columbia’s printmaking community the necessity of deeply studying technique, and continually seeking their own “new codes to follow.”