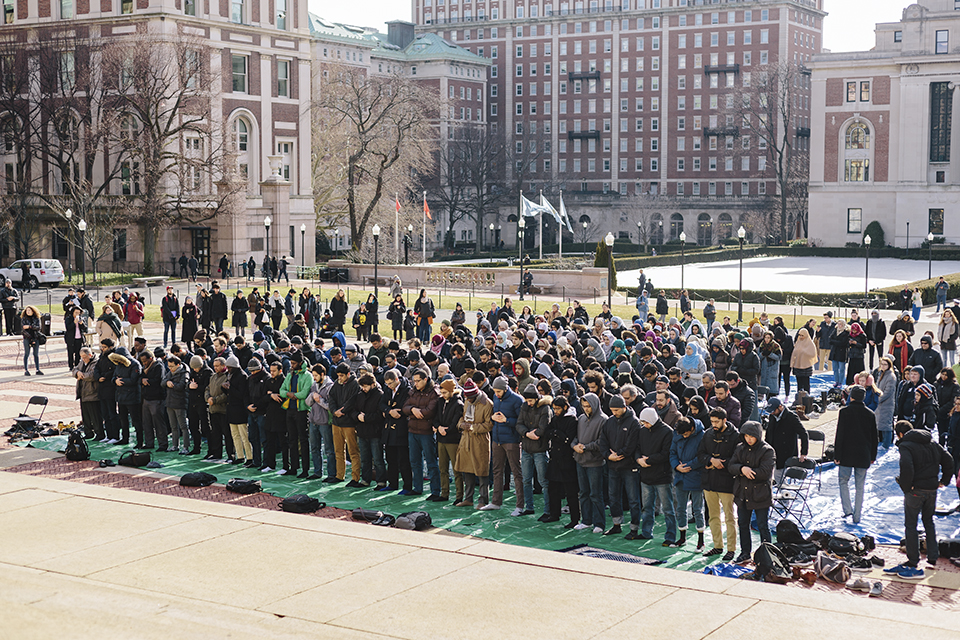 Muslim students gathered on Low plaza for a public prayer in early February.

MSA’s request, addressed in a petition to the University’s central administration, comes in the wake of President Donald Trump’s now-halted ban on immigration from seven Muslim-majority countries, which would directly affect over sixty Columbia students and was met by numerous protests on campus.

The Office of the University Chaplain is responsible for organizing intellectual events and programs related to spirituality for religious groups. While certain religious life advisers are employed by the office to serve the needs of specific religious groups, there is no RLA for Muslim students.

Though MSA President Faizan Kothari, CC ’17, and Senior Adviser Fatima Koli, BC ’17, believe that Muslim students have always needed a religious life adviser, they see Trump’s presidency as an urgent impetus for change.

“We’ve always had a need to have a religious life adviser, particularly the executive orders have made us as the MSA have this sense of urgency on behalf of our community,” Kothari said.

“Trump’s presidency and the actions he’s taken have magnified that need and added urgency to it,” Koli said. “With the ban, it’s really normalizing not only anti-Muslim hate but anti-Muslim legislation. It magnifies the need, and it’s something that needs to be done now. We can’t wait for even more harmful legislation.”

While the Office of the University Chaplain has nine advisers for various denominations of Christian faiths, four for various denominations of Judaism, and one Buddhist adviser, it does not employ any advisers specifically for Muslim students. In the University Senate’s 2015 Quality of Life survey, three percent of Columbia students identified as Muslim—the same proportion that identified as Buddhist.

University Chaplain Jewelnel Davis was not made available for an interview, nor were any of her staff. A spokesperson for the University said they had not received a petition from MSA.

A number of Columbia’s peers—such as NYU, Yale, Cornell, Princeton, and the University of Pennsylvania—already have full-time Muslim religious advisers. Harvard recently announced it would hire a Muslim chaplain in response to student demands following Trump’s inauguration.

While many religious life advisers at Columbia are not paid by the University—instead, they are endowed by alumni or volunteer their time—MSA is pushing for the administration to create a full-time, paid adviser position for Muslim students.

“The Muslim alumni community is not strong enough to create that funding, and there isn’t a nearby mosque where we could utilize volunteers from to be religious life advisers,” Koli said. “We’re pushing for the University to fund this because it’s so important in this time.”

While Muslim student groups do have club advisers within Undergraduate Student Life, Kothari believes that this isn’t enough to support the needs of Muslim students, because USL advisers have other responsibilities and most are not practicing Muslims.

“That’s different than having somebody who understands our problems on a spiritual level and can guide us on that front,” Kothari said.

Beyond asking for an RLA, MSA is also asking the University to provide summer housing for Muslim students who may not be able to return home over the summer due to Trump’s travel ban, as well as provide legal services to affected students.

Provost John Coatsworth said the University was still exploring whether to provide summer housing for those at risk of being affected by a travel ban in an interview with Spectator on Friday.

While citing the current political climate as a cause of urgency, Koli said MSA believes that support, such as hiring an RLA, should have come earlier.

“It’s the University’s job to support all the people affected. Students shouldn’t have to put aside their schoolwork to organize around these things,” Koli said. “We’re putting in all this work to ask for administrative support that should already be there.”