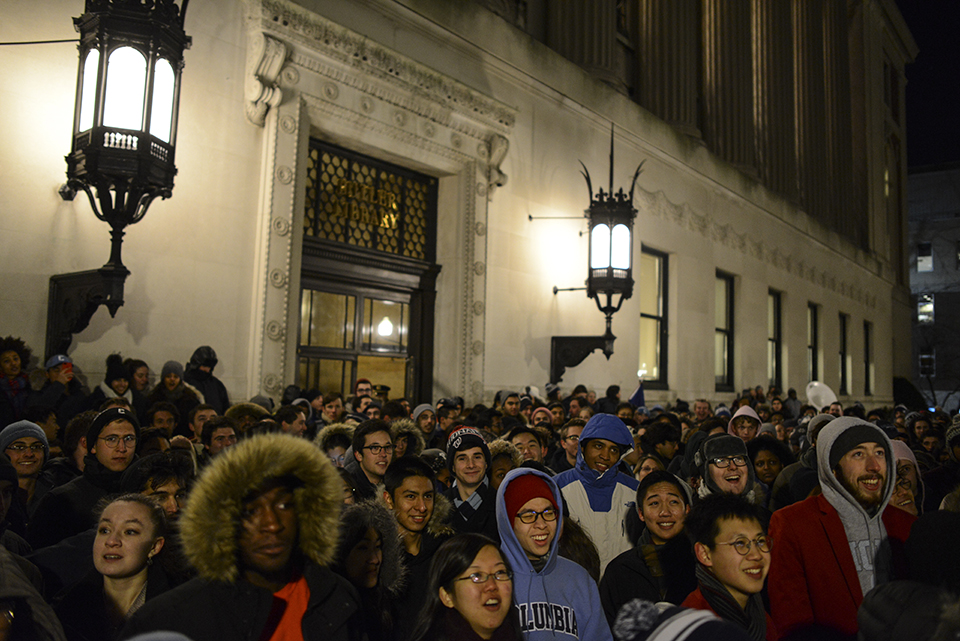 Hundreds of students gathered outside Butler Library to watch the Marching Band's performance after they were denied entry in December.

Amid mounting calls from alumni for the University to allow the Columbia University Marching Band to hold its Orgo Night performance in Butler Library, administrators say they will stand by their decision to prevent the long-standing tradition from taking place in the library this semester.

Orgo Night, a decades-old tradition in which CUMB performs in Butler on the night before finals begin, features a music and comedy act that lampoons student groups and the University. The event—which is scheduled to take place on May 4 shortly before midnight this semester—has stirred controversy for its off-color sexual and political jokes.

After the University abruptly prevented the performance from taking place in Butler in December, alumni and current students have reached out to University President Lee Bollinger, Dean of Columbia College James Valentini, and Vice Provost and University Librarian Ann Thornton to express their displeasure.

In the months since, a group of over 60 alumni and current students, who refer to themselves as Hamiltonius, has accused the University of using the guise of preserving peace in the library to shut down Orgo Night in order to censor the potentially inflammatory satire that the marching band uses in its jokes.

According to alumni, their messages have been met with silence from the University.

A University spokesperson told Spectator that administrators have received the group’s correspondence and intend to respond to the letters but confirmed that the University will nonetheless prevent the band from performing in Butler. The spokesperson reaffirmed that this decision was made to avoid disrupting students studying in the library.

Essays by Hamiltonius also critique the lack of due process by the administration in enacting the policy, claiming that the University has made “clandestine decisions without any public discussion or process.”

“The idea of the Hamiltonius essay, and the group, was to keep the discussion alive and to try to generate some discussion,” Hamiltonius member and marching band alumnus Kevin Chapman, CC ’83, said. “We perceived the people involved were counting on the issue dying.”

After submitting proposals at the end of March for the University to allow Orgo Night resume in Butler 209, Hamiltonius issued another statement last week signed by 68 Columbia College, Barnard College, and School of Engineering and Applied Science alumni in support of returning Orgo Night to Butler.

“The unfortunate thing is that there has been no effort or no willingness even to sit down and talk about it,” Columbia University Band Alumni Association Advisory Board and Hamiltonius member Dan Carlinsky, CC ’65, said. “Columbia prides itself in training its students in critical thinking, and then they turn around and treat us as if we’re not critical thinkers.”