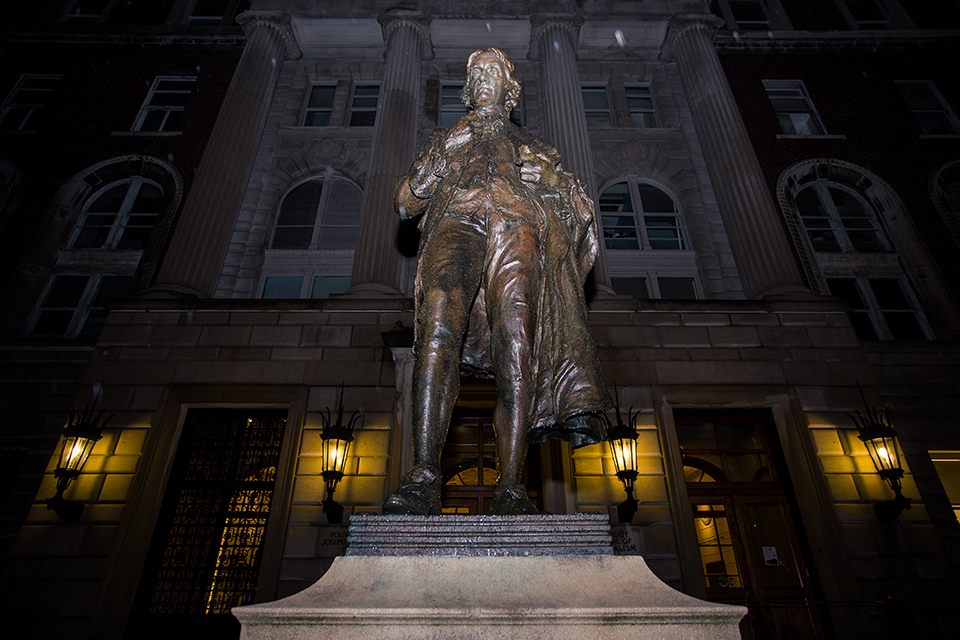 MAD has demanded that the University “acknowledge and address” Jefferson’s involvement with slavery.

A group of students has denounced Columbia’s statue of Thomas Jefferson, arguing that by honoring Jefferson without acknowledging his ownership of slaves, the University validates ongoing racism.

The group, known as Mobilized African Diaspora, protested the statue’s presence earlier this month by draping a Ku Klux Klan robe over its head. According to a blog post by MAD, the robe was removed within half an hour.

“By commemorating the legacy of a man who dismissed the humanity of all black people, Columbia continues to position itself as an anti-black institution that upholds hypocrisy and white supremacy,” the post reads.

MAD’s post does not specify whether the group is calling for full removal of the statue or for the University to contextualize the statue with an acknowledgement of Jefferson’s ties to slavery. Members of MAD did not immediately respond to requests for an interview.

A University spokesperson told Spectator that MAD’s demands had not been delivered directly to any administrator, but that the University was aware of its statement.

MAD’s demand that the University “acknowledge and address” Jefferson’s involvement with slavery follows similar proposals from the Native American Council, which requested last December that the University consider renaming buildings and removing statues of those involved in the colonization of the Americas and the slave trade.

Last fall, historical ties between Columbia and the trans-Atlantic slave trade were unveiled by the Columbia and Slavery Project, featuring research by history professor Eric Foner and his former students.