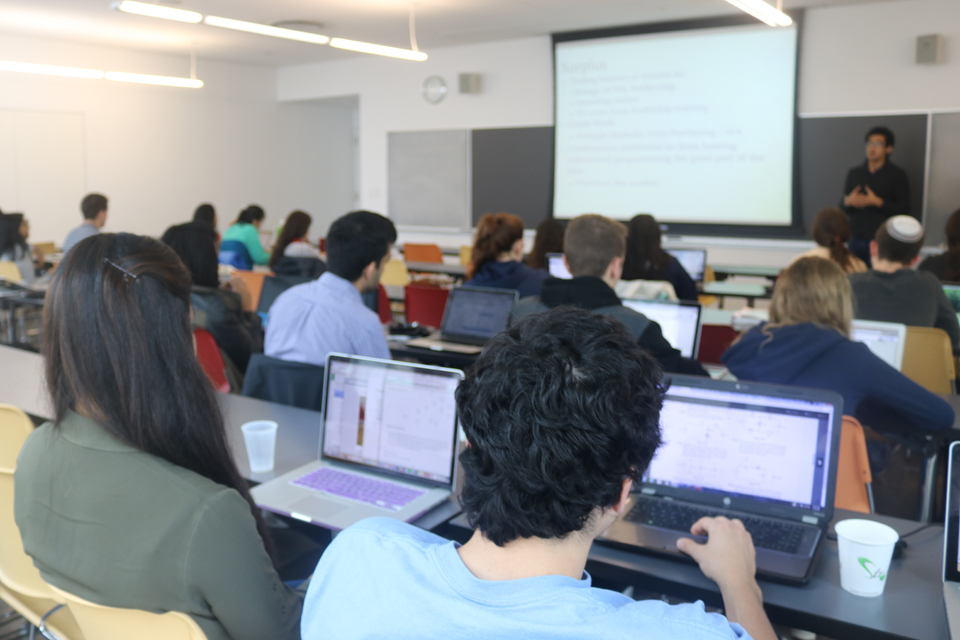 The four undergraduate councils decide how much funding in student activity fees to allocate to each governing board annually at F@CU, pictured here last spring.

As student group membership continues to grow, governing boards will distribute just 2 percent more in funds to student groups in the coming year than this past year.

The allocations were finalized at Funding at Columbia University this weekend, an annual event during which the four undergraduate councils decide how much funding in student activity fees to allocate to each governing board. Governing boards made their allocation requests on Friday after presenting their projected budgets for the coming year, and councils determined final allocations on Sunday after appeals and deliberations.

In total, the councils allocated over $1.2 million from student life fees to governing boards for the coming year. Among them was the Bacchanal committee, which will receive an allocation less than 2 percent higher than last year, after getting a near-10 percent budget increase one year ago.

CCSC, which contributes more than the other councils combined and typically spends the highest amount per student of all the councils, said it reduced its annual allocation from $697,082 to $690,868 in part because it overestimated Columbia College enrollment numbers—and, therefore, the amount of student life fees—last year.

CCSC also announced a new travel fund in the coming year to help student groups pay for trips, which will cost $38,000 and will be financed by Dean of Columbia College James Valentini. CCSC Vice President for Policy Nicole Allicock, CC ’18, said that with this spending by Valentini taken into account, the total money going to student groups will increase in the coming year.

The reduced funding left governing boards with allocations that were more bare-bones than in years past. Club Sports Governing Board team sports representative Jadrian Guy, CC ’18, took issue with CCSC’s decreased funding and criticized the assertion from councils that their spending should scale to the total number of students from their schools participating in clubs.

“Rather than trying to improve the quality of all groups on campus, you're just trying to help your constituents, which is political but it's also kind of a dick move," Guy said.

Allicock defended CCSC’s decision to decrease its funding in response to complaints of insufficient funds from governing boards during F@CU.

“It seems absurd to me that it's expected that CCSC will cover all of this,” Allicock said. “I don't wholly understand how we're supposed to ensure that every single board doesn't get cut. It hurts me to see this but I don't understand how this is going to change if other councils don't bring in more money.”

During deliberations, the leadership of Student Governing Board agreed to share $7,000 of its surplus budget with other governing boards to meet gaps in funding.

“This is not a sustainable option,” SGB Chair Britt Henoch, BC ’18, told Spectator. “[Surplus] reclamations go up and down, but this is really a call to councils to fix things from last year.”

The Bacchanal committee was allocated $231,330 after requesting $274,194. This marks a 1.6 percent increase from last year, which was a full 9.7 percent higher than the year before.

Part of the reason for the more modest increase was the committee’s ability to accurately protect security and facilities costs for Bacchanal, which used the same crowd control setup as last year. As a result, costs were approximately the same this year and last year—a departure from last-minute costs incurred by Public Safety in 2016.

Activities Board at Columbia

According to Henoch, the board revived several groups this year and saw increases in membership in four of its largest groups, leading to a need for increased funding. Because it did not receive an increase, it may have to dip further into its surplus funds to support its groups.

Guy said that the club needed increased funding to cover newly-created sports teams, as well as to cover transportation costs and coaches’ salaries. With the decrease in funding, the board could be forced to cut existing programming, according to Guy.

CI, a group that provides support for applying to higher education and mentoring to students in the Harlem and Morningside Heights community, was allocated $78,996.91—an increase of 0.24 percent from last year—after requesting $98,737.

Incoming CI Treasurer Candy Zhao, CC ’19, said that the board needed more funding to increase its partner sites and recruit more volunteers for its programming.

Governing Board at Barnard

GBB executive chair Sidney Benich, BC ’19, said that while slashed funds would decrease the amount of programming the board could sponsor, it would aim to save money by reducing the budgets of student groups who requested too much in years past.

The IGC, which governs the Panhellenic, Interfraternity, and Multicultural Greek councils and typically receives the least funding of the governing boards, requested $78,596 and received $38,832.22, a 173.59 percent increase from last year. The board saw a sharp increase in funding because it was penalized with a low allocation last year for inefficient management of funds.