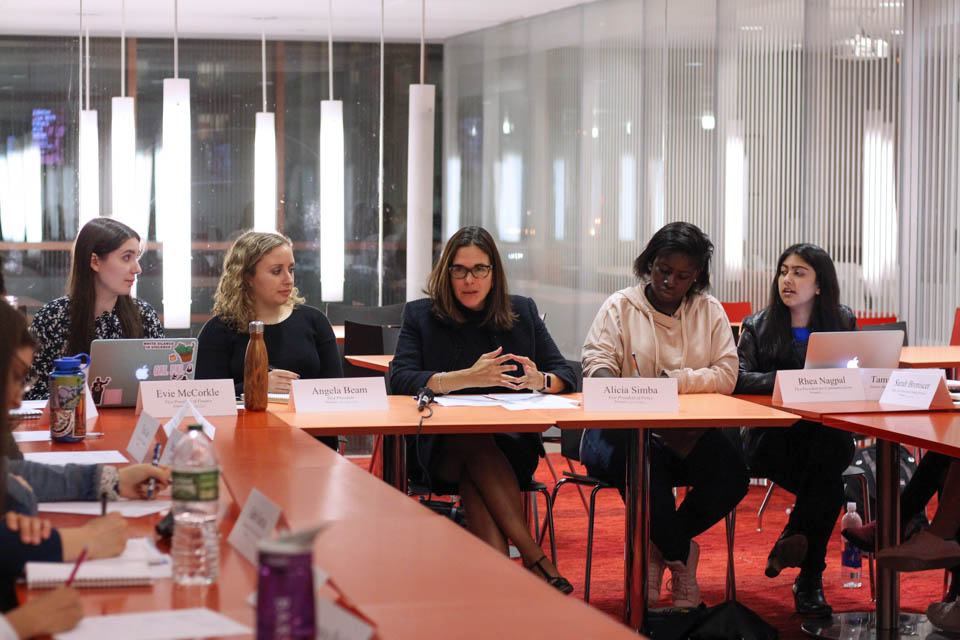 Beilock formulated her priorities as the result of conversations with members of the Barnard community.

Barnard President Sian Beilock shared her priorities for the year and answered questions from members of Barnard’s student government at its Monday meeting.

Beilock took office on July 1 after the unexpected departure of former president Debora Spar in March. While she formally addressed the community for the first time at the college’s convocation last month, Monday’s meeting provided an opportunity for her to more clearly outline her priorities for the year and her tenure at Barnard.

Beilock formulated her priorities as the result of conversations with members of the Barnard community. She said Barnard’s experience as an urban college, its mission to ensure academic excellence for students of all backgrounds, and the resources it provides to science, technology, engineering, and mathematics students while still maintaining its focus as a liberal arts college were some of her main priorities.

At the meeting, Beilock discussed the importance of continuing work on the projects that Spar initiated, such as the Teaching and Learning Center, as well as pursuing issues that matter to her, such as the experience of STEM students and student athletes.

Since arriving on campus, Beilock she has met with students, more than 70 faculty members, and members of the board of trustees to discuss what issues they would like to see prioritized in the coming year.

A cognitive psychologist, Beilock said she also plans to take a quantitative approach to addressing diversity at Barnard, including measuring how the implementation of task force recommendations improves campus inclusion.

In addition to ensuring that Barnard’s campus is inclusive, Beilock also highlighted the importance of students engaging with the outside community.

“We have to understand that there is a lot to learn from the community around us and also a lot to give,” she said. “I want to make sure that all faculty can bring the city into their classroom.”

Beilock mentioned pre-existing efforts at learning initiatives that use the city as an extension of the classroom, such as the Harlem Semester Program and Science in the City, but said she would like to provide even greater opportunities for students and faculty to engage with outside institutions.

Representative for Seven Sisters relations Julia Pickel, BC ’19, a biology major, voiced her concern over the resources and research opportunities available for STEM students and said they are not increasing at a rate fast enough to accommodate the growing number of Barnard students who major in STEM, which now constitutes about a third of students.

As the number of students taking science classes increases, Beilock said she plans to increase support by ensuring there are enough lab technicians to assist students and that science resources in Altschul are up to date.

Vice President for Campus Life Aku Acquaye, BC ’18, asked Beilock if she plans to address the decreased rate of Barnard participation in varsity athletics.

Barnard is the only women’s college in the country to offer students the opportunity to compete as members of Division I athletics on Columbia sport teams, but as of last year, just 9.6 percent of women on Columbia sports teams were Barnard students.

Beilock, a former competitive athlete, said she wants to provide support for student athletes and that Dean of the College Avis Hinkson is currently working with a committee to meet with student athletes and members of the Columbia athletic department to understand this decrease and to come up with solutions to better support Barnard athletes.

First-Year Class President Sara Morales, BC ’21, who was elected last Friday, pressed Beilock on the issue of inclusivity and support for students of color at Barnard, asking Beilock to list “concrete next steps.”

Beilock said that while she plans to address the issue of diversity on campus, it is something the “whole community” needs to work on. “This is a subject in which I am happy to have many voices,” she said.

Beilock’s first step to support first-generation students will be an inclusive pedagogy workshop for faculty members to attend this semester.

While no students—other than those on SGA—attended this week’s meeting, Beilock’s presentation and subsequent question and answer session were livestreamed on Facebook for students to watch remotely.

“This was the first time a meeting was live streamed,” SGA President Angela Beam, BC ’18, said. “It’s disappointing [that students did not attend], but we typically don’t have as much of a crowd. We’re hoping that will help make our meetings more accessible.”