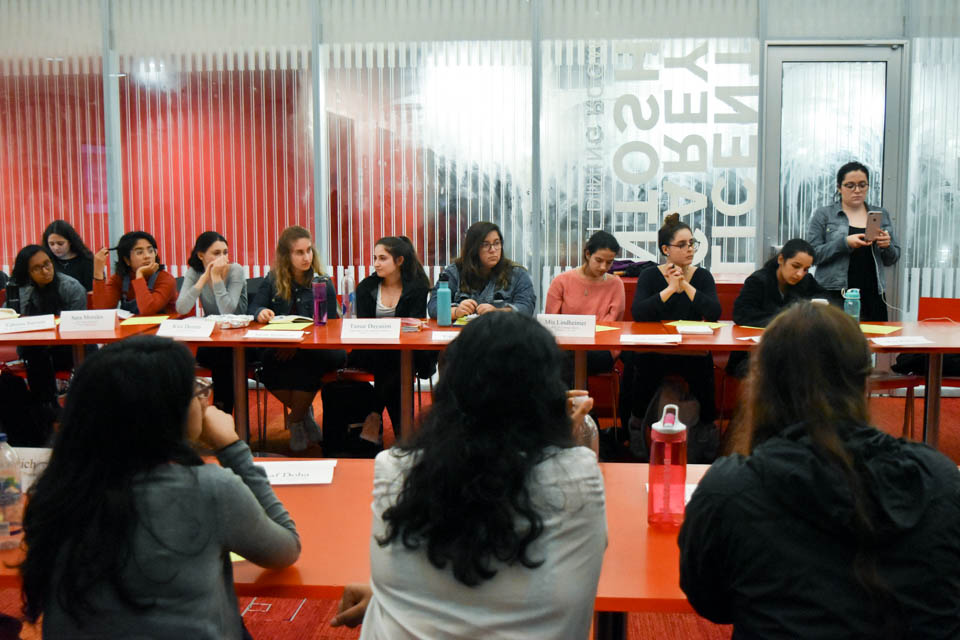 At the beginning of the council’s weekly Monday meeting, Student-Worker Solidarity called on SGA to issue a public statement in support of the union during the open-floor portion of the meeting

Graduate workers voted 1602 to 623 to join Graduate Workers of Columbia University-United Auto Workers last November, but the University has since filed objections with the National Labor Relations Board, stalling negotiation efforts.

At the beginning of the council’s weekly Monday meeting, Student-Worker Solidarity called on SGA to issue a public statement in support of the union during the open-floor portion of the meeting. At that time, present members of SGA unanimously voted to support the union.

“As representatives of Barnard’s student body, we feel compelled to speak out on this issue due to the presence of Barnard students in Columbia classes that are TA’ed by student assistants represented by GWC,” SGA wrote in the statement, which was emailed to both University President Lee Bollinger and Provost John H. Coatsworth following the meeting.

“Working conditions are learning conditions. It is essential that the administration grants fair and equitable working conditions to graduate workers, not only because it is their right, but also because how they are treated directly impacts our education as Barnard students,” the statement continued.

Following the vote, the council meeting returned to its planned discussion of campus sustainability and included presentations by Divest Barnard for a Just Transition, EcoReps, and Barnard’s Director of Sustainability and Environment and assistant theatre professor Sandra Goldmark.

The conversation was framed by last year’s decision by the board of trustees to divest from companies that deny climate change, as well as companies that mine coal and tar sands.

The decision came more than a year after calls from student activist group Divest Barnard, since rebranded as Divest Barnard for a Just Transition, for the college to divest from fossil fuels. A task force was convened to analyze the financial and economic paths toward divestment for the college in February 2016 and published its findings and divestment recommendation—which the board accepted—in a report in December 2016.

The college has begun the divestment process since then, and last month announced its decision to switch investment managers. As part of the next step, Barnard is currently establishing criteria to assess whether a company is a denier of climate science.

At the SGA meeting, Divest Barnard for a Just Transition members discussed their recent rebranding, as the group will now focus on ethical reinvestment and community outreach.

Representatives Sam Doss, BC ’19, and Maggie Israel, BC ’19, outlined the activist group’s strategy as one that will focus on reinvesting Barnard’s endowment in investments that are “ecologically sustainable, equitable, and just for all.”

“This new phase that we’re moving into could still be bad,” Doss said. “Renewable energy companies can still be problematic—they can have exploitative labor practices. So we’re trying to make sure that, as we’re in this state of change, we’re moving into good practices.”

However, Doss also said that though Divest Barnard for a Just Transition is interested in reinvesting endowment money into renewable energy sources, it plans to primarily focus on reinvestment of “social capital, time, and resources” that Barnard can provide to local communities, including outreach in the Harlem community.

Aside from fossil fuel divestment, SGA also heard from speakers about sustainability as a whole at Barnard.

Vice President of EcoReps Samin Chopra, BC ’19, discussed the group’s events and goals for the semester, including their upcoming herb and flower seed giveaway and their plans to establish a community garden in the Barnard Quad.

Chopra also discussed the organization’s plans to encourage students to donate more items for their end-of-the-year Give and Go Green sale.

“The divestment process was a great example of a moment when we had students, faculty, staff, and trustees really working together, and it worked,” Goldmark said. “I think that that’s a model that we can continue as we move into the second set of recommendations, the sustainability ones.”