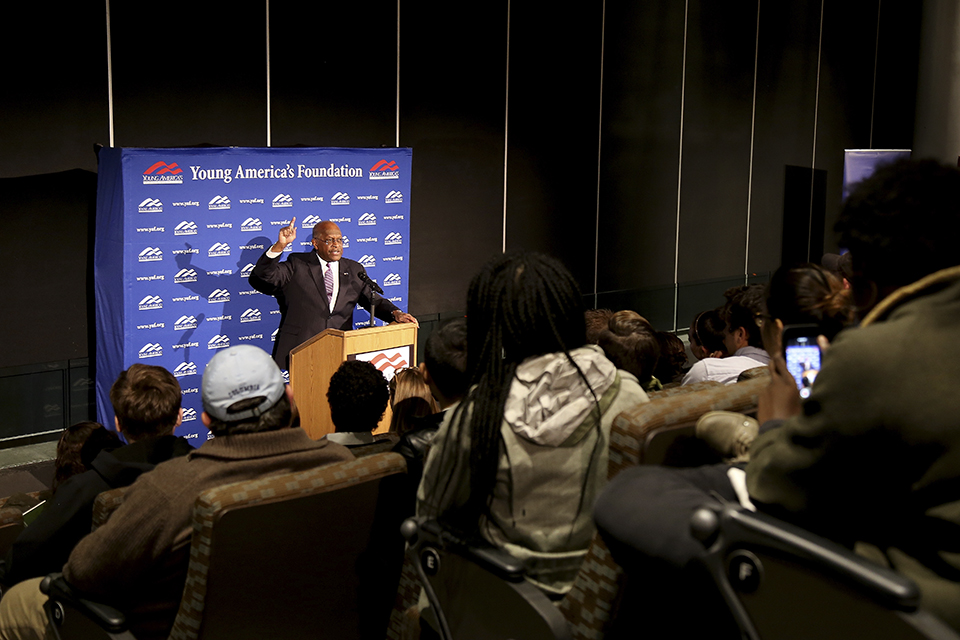 Unlike last week's conservative speaker, Cain did not draw any protesters.

The appearance followed last week’s CUCR speaker, Tommy Robinson, who attracted dozens of protesters to Lerner Hall, some of whom are currently facing disciplinary action. An email sent out this morning by University Provost John H. Coatsworth warned potential protestors that it is against University policy to “interrupt, shout down, or otherwise disrupt an event,” no matter the views of the invited speaker.

After a brief run as the frontrunner in the 2012 Republican Presidential primary race, which hinged on advocating a “9-9-9 Plan” to reduce taxes, Cain suspended his campaign amid accusations of sexual harassment.

Cain, whose views are generally more moderate than Robinson’s, spoke uninterrupted for 45 minutes before taking questions from the audience. Not a single protester was present.

“I think the reason why there were no protesters at this event is that Herman Cain is a mainstream Republican. If [people] were to protest him it would just look bad on their side. … I understand why they [protested Robinson] but it would just look bad to protest someone who ran for the presidency, who had such a huge platform,” CUCR President Ari Boosalis, CC ’19, said.

The event was held at Roone Arledge Auditorium in Lerner, and was attended by about 40 people. All attendees were given a copy of Cain’s book, “The Right Problems: What the President, Congress, and Every Candidate Should Be Working On,” as well as a card bearing his signature.

“I have a lot of bullshit to counter everyday,” Cain said as he began to analyze the topic on the agenda: “The American Dream in The Age of Trump.” Cain spoke about the importance and difficulty of staying “informed, inspired, and involved” in achieving one’s goals in the United States, drawing on his own career trajectory as a computer scientist and businessman.

“The American dream is not just alive: It’s alive and kicking,” Cain said, pointing to a historically high stock market and the looser corporate regulations under President Trump.

While the atmosphere remained largely civil, some tension arose during the 30-minute Q&A session following Cain’s remarks. Students posed doubts about Cain’s claims of benefits from the repeal of the Affordable Care Act as well as the protection of the freedom of speech on college campuses.

“Ignore the negative liberal media,” he said. “I am armed with the facts.”