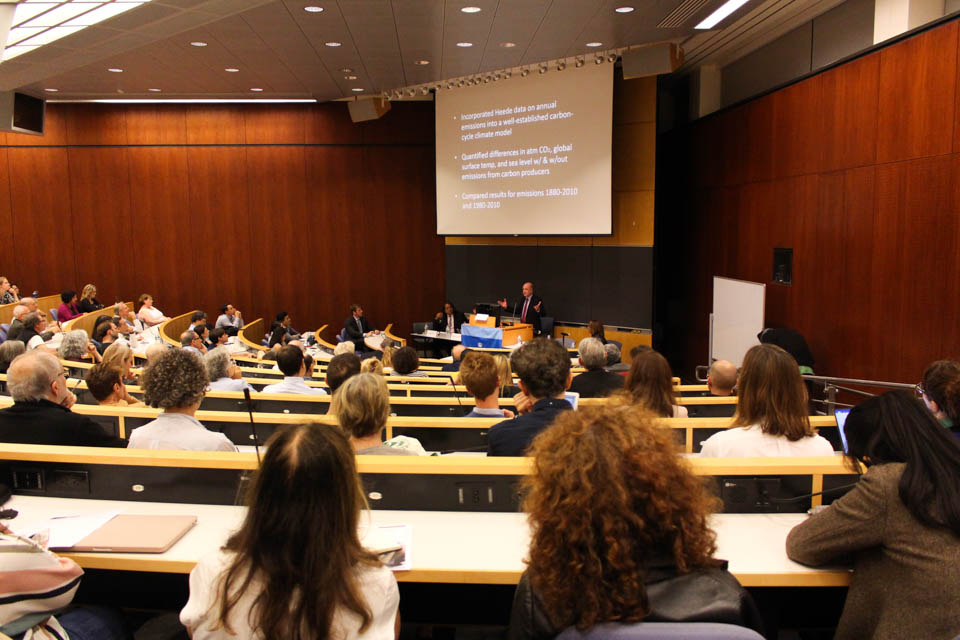 Although the existence of climate change was not in dispute, the question of responsibility was at the forefront of the discussion.

The Law School hosted a panel on whether fossil fuel companies can be held liable for the monetary costs of climate change on Monday night.

The panel was held in response to both the Trump administration’s decision to roll back climate change regulations and recent lawsuits filed by cities and counties in California.

The panel was primarily composed of experts in law or climate change. Director of Science & Policy at the Union of Concerned Scientists Peter Frumhoff, attorneys Sharon Eubanks and Thomas A. Lorenzen, and Cornell Law School professor Gerald Torres, all gave their perspective on the major points of contention with respect to climate change.

Although the existence of climate change was not in dispute, the question of responsibility was at the forefront of the discussion.

“We are already living in a world where global temperatures are 1 degree Celsius, or 1.8 degrees Fahrenheit, higher than they were for the period of 1880 to 1910,” Frumhoff said. “The question that arises is, who should pay for all of this?”

With the fifth anniversary of Hurricane Sandy on Sunday, Frumhoff addressed the monetary costs of the natural disaster that have been attributed to climate change.

“Of about $12 billion of damage from storm surge associated with Sandy just on New York City alone, anthropogenic sea level rise increased the damage by about $2 billion,” he said.

Frumhoff referred to a scientific study published by the Climate Accountability Institute in 2013, which investigated the major sources of carbon emissions since 1854.

“About two-thirds of all industrially sourced carbon dioxide and methane that has been released into the atmosphere since the dawn of the Industrial Revolution can be traced back to just 90 companies,” he said.

Both Eubanks and Torres agreed on the need for action, especially legal action, against these fossil fuel companies.

“It’s not just about suing just for the sake of suing, it’s about what’s at stake here,” Eubanks said.

Lorenzen responded in defense of fossil fuel companies, suggesting that the division of a plaintiff and defendant in the judicial system is not the most effective model in addressing political questions.

“We are all responsible for this alleged damage,” he said.

Torres doubted the judicial system’s willingness to decide on cases pushing for liability.

“The costs are open-ended. A court is going to be more loath to find liability because there is no end point,” he said.