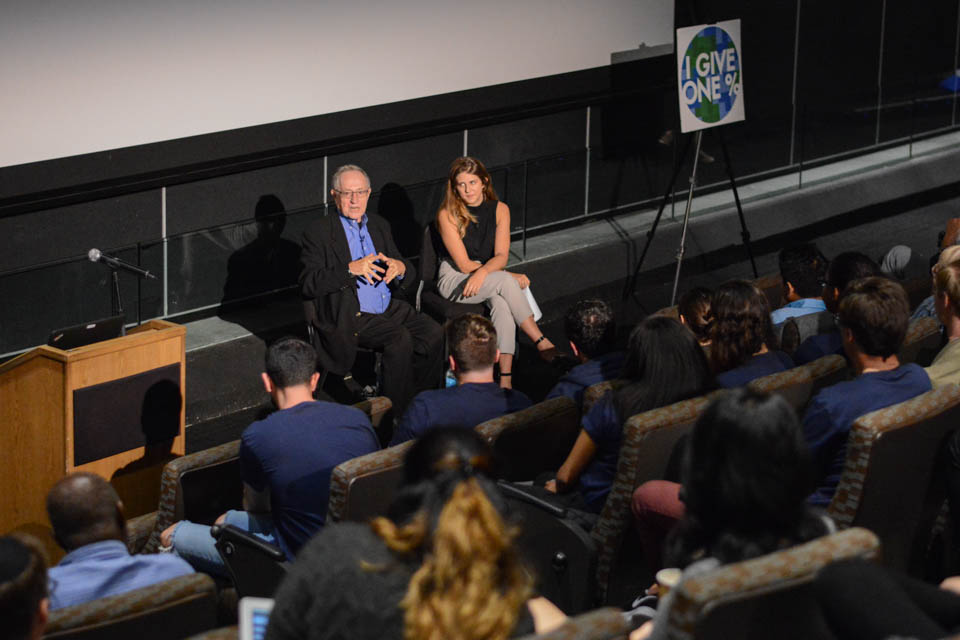 Dershowitz called on students to organize grassroots movements to have a charitable impact.

Famed lawyer and Harvard professor Alan Dershowitz discussed student impact, leadership, philanthropy, and data transparency at a panel hosted by One For The World on Monday evening.

Dershowitz is known for maintaining a provocative and controversial persona, with past clients including O. J. Simpson, Mike Tyson, and Claus von Bülow. He is an outspoken supporter of Israel and gave a speech to Columbia’s chapter of Students Supporting Israel last month. Although Dershowitz anticipated that his speech would garner protests, no students protested that event or his talk on Monday.

Moderated by Gabi Steele, previously a data visualization specialist at The Washington Post and now an engineer and designer at WeWork, the Q&A was held in Lerner, with about 70 attendees.

Directed by Steele’s questions, the focus of the discussion shifted to the role of charity, and specifically to the impact of students on society. Dershowitz called on students to organize grassroots movements to have a charitable impact.

“We all know about the positives, that young people bring spirit, young people bring energy. But it was also young people who brought Nazis. … Hitler’s biggest supporters were kids your age,” Dershowitz said. “But you have to make that impact positive rather than negative. Youth in and of itself is not a guarantee of virtue; you have to turn it into virtue.”

Dershowitz also spoke about data transparency and loss of privacy. Referring to himself as a “low tech luddite,” Dershowitz used his own Twitter account, “filtered twice” through his assistant and his wife, as an example of dealing with public information.

“What I worry about is that when Justice Kennedy retires, and President Trump appoints a real right-winger, if Justice Ginsburg and some of the others are gonna say to themselves, ‘It’s over, it’s lost, we might retire as well,’” Dershowitz said. “It may create an avalanche of retirements, and that really makes me even more nervous.”

Dershowitz also referenced his career background as a lawyer, advising students to pursue a career that would allow them to make a difference.

“Look, I was born to be a lawyer. I argued with the doctor who was birthing me. From the day I was born, I was arguing with people,” Dershowitz said. “It’s so important to figure out a career in which you never say thank God it’s Friday, you always say thank God it’s Monday. And you wake up every single morning eager to change the world, do what you can to make things better.”