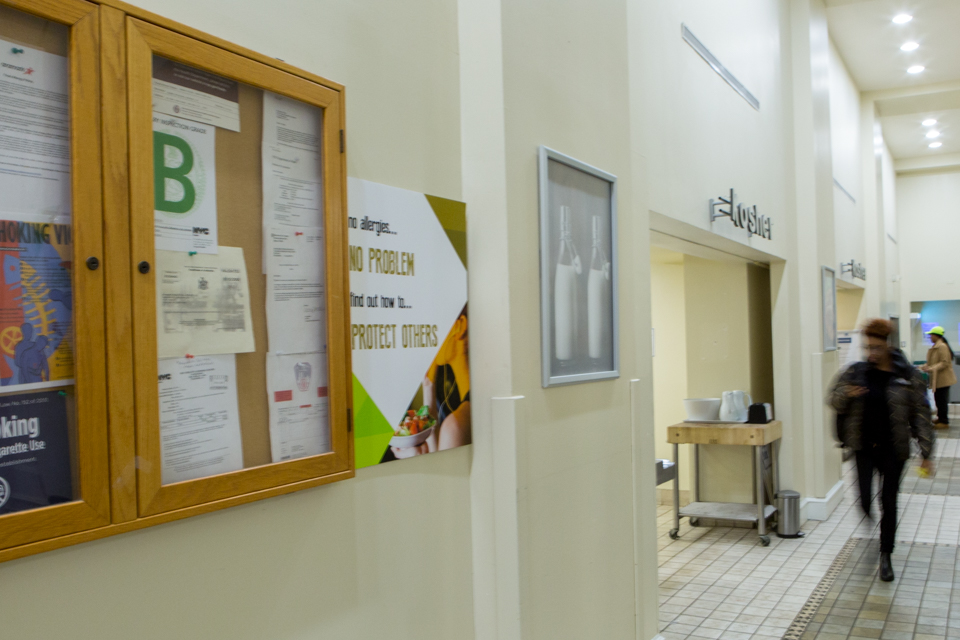 Hewitt Dining Hall's "B" health rating on display by the entrance and next to the kosher dining line.

According to the New York City Department of Health and Mental Hygiene, Hewitt, which is run by the Aramark Corporation, received a B grade in an inspection conducted on Oct. 30, 2017, despite having an A the previous year.

Hewitt received 14 violation points this past fall, according to the department report. The Diana Center Cafe, which was inspected on Sept. 17, 2017, performed comparatively better with 10 violation points and an overall A grade. John Jay Dining Hall and Ferris Booth Commons both received A grades in their most recent inspections.

The inspection identified three critical sanitary violations, including evidence of mice or live mice; presence of filth flies or other food and waste-related flies, and failure to properly clean food contact surfaces after each use and following any activity when contamination may have occurred.

However, students remained largely unaware of the lowered score until a photo of a sign outside the dining hall displaying the B rating was shared in a popular Barnard Facebook group last week.

Health department ratings are based on the number and severity of violations a food service establishment receives when inspected. The fewer points a location receives during an inspection, the better the result. Restaurants with a score between zero and 13 points earn an A, those with 14 to 27 points receive a B, and those with 28 or more earn a C.

The Diana Center Cafe also received violation points for evidence of mice or live mice present in the facility’s food and/or non-food areas, as well as points for failure to vermin-proof the facility, an issue cited in Hewitt’s report as well.

Aramark has been the subject of numerous scandals and defamation reports, including complaints about maggots and rocks in food, sexual harassment, drug trafficking, and employee misconduct.

“I also wasn’t surprised [by Hewitt’s rating] because I know Aramark’s track record,” Arianna Scotti, BC ’20, said. “What was more surprising to me was the fact that, if you look back at [Hewitt’s] infraction history, this has been a problem stretching back to 2015, but they’ve clearly made no effort to solve or fix that problem.”

The reports from the health department’s website indicate that Hewitt has received violation points for its failure to vermin-proof the facility for the past three years.

Still, in a statement to Spectator, a Barnard spokesperson reaffirmed that the college takes food safety seriously and works closely with Aramark to ensure that its food service operations meet the highest standards, adding that the quality and safety of the dining hall’s storage, preparation, and service of food was never at risk.

SGA Representative for Food and Dining Services Sarah Broniscer, BC ’20, also defended the company’s response to the violations. “Obviously, [the rating is] not great,” Broniscer said. “I’ve brought this up to Aramark in meetings several times and they’re super aware of the issue and they’re really working to fix this. They’re not trying to sweep it under the carpet.”

The spokesperson also claimed that Aramark has strengthened its daily inspections since the rating was released, and that they are confident Hewitt will receive an improved rating at the upcoming inspection in a few weeks.

However, even if Hewitt returns to an A rating, many students remain concerned that similar problems may persist, particularly first-years and residents of the quad on mandatory meal plans.

“I’m lactose intolerant, I have celiac disease, and I’m kosher, so this [rating] is just another grievance I have about being forced to be on the meal plan and not having access to a kitchen,” Avital Raff, BC ’21, said. “It’s something that gives me anxiety, regardless, and the fact that my food might be contaminated in other ways has really just led to even more anxiety.”

Raff also said that she became ill last semester as a result of cross-contamination and lack of labels on foods containing allergens.

“The fact that there isn’t concern [about] allergens or diseases and the fact that the food might be dirty is very upsetting,” she said. “It’s not kosher to have bugs in one’s food.”