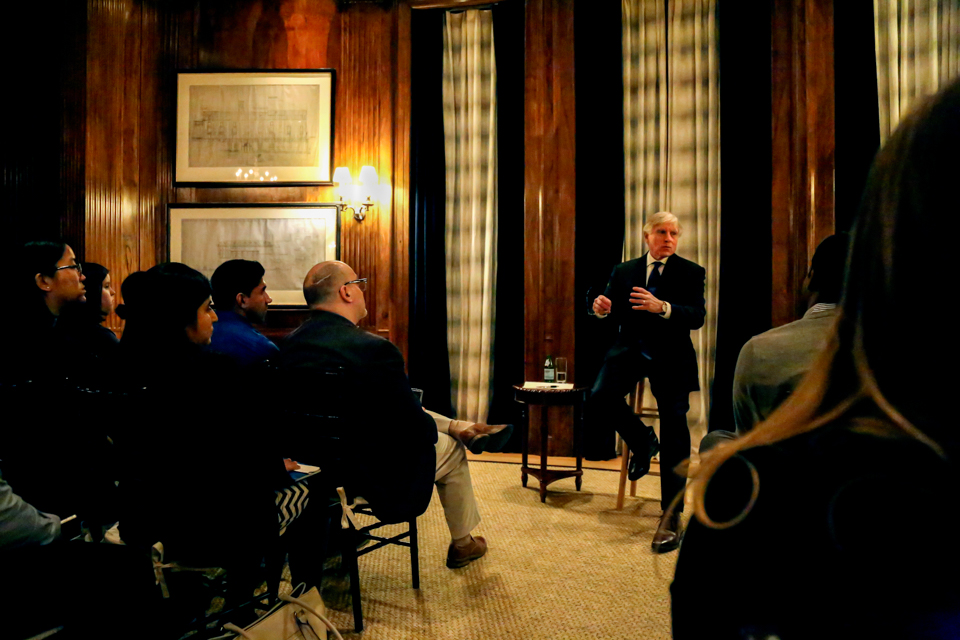 President Bollinger talks to members of the graduate student community at Tuesday night's Fireside Chat in his home.

Last week, Provost John Coatsworth announced that Columbia will seek a review in federal court of the status of graduate students as university employees. At the end of last year, the National Labor Relations Board reaffirmed the validity of the graduate students’ election, prompting students to deliver an initial request to bargain.

At the fireside chat, Bollinger explained how the University sees the need to preserve a distinction between graduate students and employees, though he did not object to the formation of unions in general.

“Our position on this has nothing to do with our position on unions; all the time we have [had] very good relations with unions,” Bollinger said. “The interest that we’re trying to preserve is the control over academic decisions and the conception of a graduate student as a student. … We care deeply about graduate students and we want to support them.”

When asked why he previously bargained with the graduate student union at the University of Michigan, Bollinger argued that state laws delineate greater limitations on bargaining terms. Columbia union bargaining, on the other hand, would rely on federal laws. The United Automobile Workers, one of the largest unions in North America, would have broader bargaining capabilities, which Bollinger said would blur the lines between terms of employment and academic decisions.

Graduate students’ questions also focused on sexual harassment policies and mental health resources. The University’s existing efforts include the creation of the Office of University Life and the Sexual Health Initiative to Foster Transformation, a $2 million research project spearheaded by faculty to examine sexual violence among undergraduates that started in 2015.

As of October, the University was facing five federal sexual assault investigations, and according to a study done by SHIFT, more than one third of undergraduate women who participated in the survey experienced some form of sexual assault before their senior year.

In response to questions about recent Title IX investigations, Bollinger said that the University prioritizes sexual health and student safety. Bollinger also said that many initiatives to prevent sexual violence and improve mental health will be announced in the future, but did not share any further details.

When asked whether SHIFT’s research would prompt the University to take action, Bollinger said that Columbia has “very concrete things that we are working on and that will come out of that.” Bollinger also explained that the Office of University Life was working on many initiatives, but did not specify what those initiatives are.

In light of stress culture and the wave of suicides last year, students raised questions regarding mental health services on campus. Bollinger cited the University’s partnership with the Jed Foundation, along with initiatives that will be announced in the future, as evidence of Columbia’s effort to improve student well-being.

Scott Wright, Vice President for Campus Services, who also attends most fireside chats, said that Columbia is willing to provide as much student mental health support as needed.

“Every single death becomes a really harrowing reminder that this is a very difficult time in people’s lives,” Wright said. “But there has never been a time where Columbia didn’t give Counseling and Psychological Services the resources required to do more and more and more.”