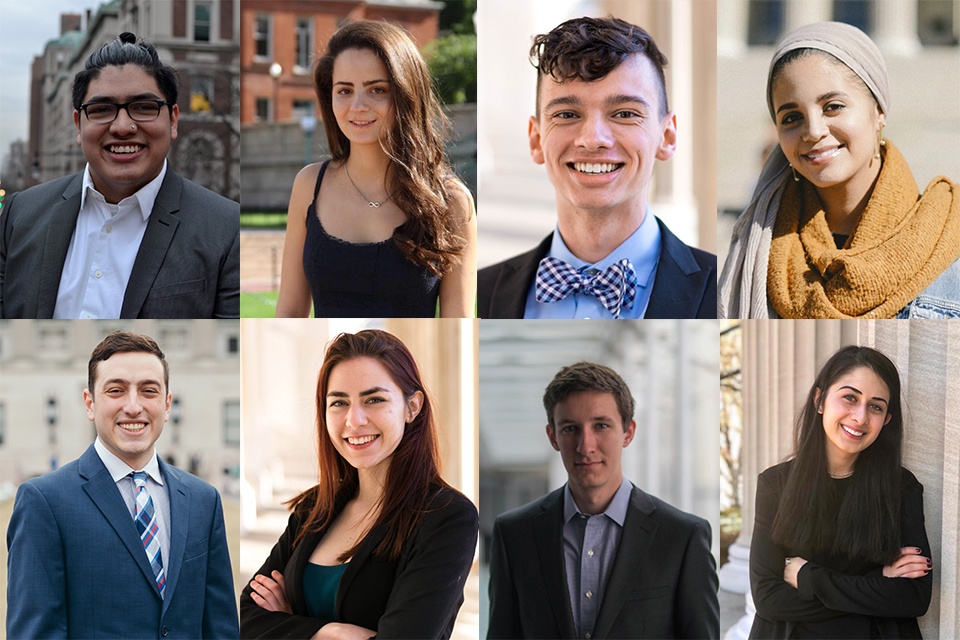 The eight candidates for University Senate from CC and SEAS.

In their platforms, made public this week, candidates for Engineering Student Council and Columbia College Student Council take aim at health and fiscal concerns facing undergraduates.

Among the most common issues candidates intend to take on are mental health, specifically in light of the administration’s recent efforts in partnership with suicide nonprofit the Jed Foundation, as well as the lack of student-oriented spaces and the difficulties faced by low-income students.

Most positions, including a majority of the executive boards of both councils, remain uncontested, something which has been an issue in the past.

CU Roar candidates, all but one of whom are running for CCSC’s executive board uncontested, promise to work with student groups and administrators to ensure students have access to mental health resources as well as access to space on campus. Elise Fuller, CC ’19, candidate for VP of Policy, specifically proposes increasing faculty diversity and creating an event manual for student groups to make sure their events are accessible to all. Candidate for VP of Finance, Adam Resheff, CC ’19, further proposes the creation of a Student Assistance Fund for low-income students.

Its ESC counterpart, FUll House, which is running completely uncontested, plans to make the campus more sustainable, reform student activities financing, and increase access to pads and tampons on campus. Adekunle Balogun, SEAS ’20, candidate for VP of Policy, plans to expand the Green Fund for campus sustainability projects, as well as to introduce central composting to campus dorms.

At-large representatives are focused on issues as varied as implementing preventive measures against the flu to streamlining services offered by the Office of Disability Services. Jennifer Martinez, SEAS ’21, candidate for representative for first generation and low income issues in ESC, proposes expanding summer funding and making graduate school resources more accessible to undergraduates, while Heven Haile, CC ’21, candidate for race and ethnicity representative, wants to ensure that Columbia is held accountable for its agreements with the Harlem community and proposed a mandatory “Power, Privilege, and Oppression” workshop for all students.

The positions for University senators, who serve two-year terms, are some of the most contested this year, with six candidates competing for the three CC seats and two candidates competing for the one SEAS seat. Columbia College candidates for University Senate, while promising to work on initiatives related to financial accessibility and mental health, are also focused on issues like student journalism, climate change, and administrative policy reform.

Alfredo Dominguez, CC ’19, plans to advocate for more spaces for FGLI and Latinx students, while Grant Pace, CC ’20, promises to advocate for a carbon-neutral campus. In the engineering race, Zoha Qamar, SEAS ’19, is seeking to increase access to pads and tampons, as well as to improve reporting for instances of sexual violence, while Cindy Soifer, SEAS ’20, plans to expand the food bank and destigmatize mental health training.

The full list of candidates, parties, and platforms can be found on CEC’s newly-launched website, which was unveiled last Friday.

Council debates will be hosted by Spectator and CEC, and will be held Sunday, April 8 beginning at 10 a.m. in Altschul Auditorium.