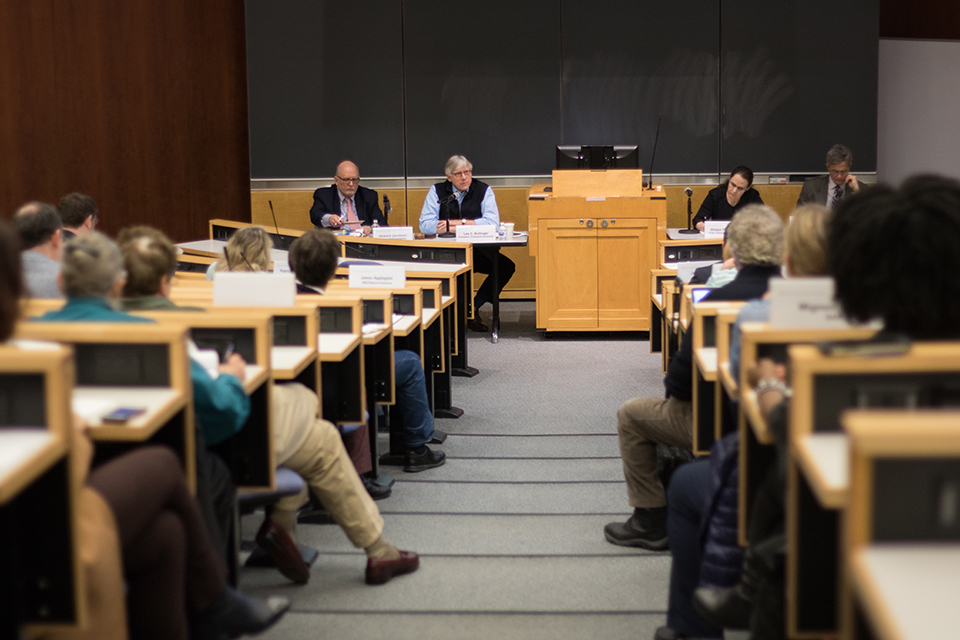 University President Lee Bollinger encouraged the Senate to engage in the debate surrounding free speech on campus during the plenary on Friday.

The University Senate unanimously passed a resolution in support of freedom of expression on campus at the Senate plenary meeting last Friday.

The decision follows the adoption of a resolution in support of academic freedom of speech, passed at a plenary meeting in February. The new resolution, put forward by the External Relations and Research Policy and Student Affairs committees, uses the First Amendment as a guideline for principles that govern University speech. It also outlines the creation of a committee to organize town hall meetings in which students can discuss ideas and respond to speakers.

Economics professor Eli Noam, who presented the resolution at the plenary, said that it will protect speech while also focusing on giving those who disagree an opportunity to respond.

“The clauses clearly show sensitivity on our part to historically marginalized groups and others who need to be heard and protected and listened to—within their rights—to protest in general and speak in general,” Noam said.

University President Lee Bollinger, who also presides over the Senate, said it is especially important for the Senate to engage with the perpetual debate around freedom of speech.

“We regularly have student groups invite speakers to come to the campus and speak when those speakers have messages that are deeply offensive and inflammatory and hurtful to other members of the community,” Bollinger said. “The thrust of this resolution is [that] the Senate can try to help by providing those students opportunity to express their views in contrast to the speaker.”

In response to the resolution, senators expressed concerns regarding the lack of connection between principle and execution, citing the lack of clarity around the University’s decision to ban protesters who interrupted white nationalist Tommy Robinson’s speech from future Columbia University College Republicans events. When asked about changes to implementation of policy, Executive Vice President of University Life and Rules Administrator Suzanne Goldberg said that she could not comment on individual situations, but referred to her website as a source of more information regarding the rules committee.

In addition to passing a resolution on free speech, the Senate also discussed a policy proposed by the Faculty Affairs and Student Affairs committees and the Commission on the Status of Women that prohibits any consensual sexual and romantic relationships between undergraduate students and professors. Previously in an interview with Spectator, Bollinger also said that the University’s policies should be expanded to all undergraduates.

Currently, the University only prohibits sexual and romantic relationships when an undergraduate student is directly under the authority of a faculty member. However, according to Joshua Schenk, CC ’19, a member of the Student Affairs Committee who presented the resolution, the current University policy does not do enough to protect student-faculty dynamics.

“When professors engage in sexual and romantic relationships with students, the professional and educational mission of Columbia is broken,” Schenk said. “Faculty members hold a unique position in our community, one in which all faculty members should be mentors to all students regardless of direct supervision. We should want students to know each and every professor as someone to trust.”

Greg Freyer, an environmental health sciences professor from the Faculty Affairs Committee, said that the resolution aims to address an existing problem regarding student-faculty relationships that has always existed but is never spoken about.

“I think that oftentimes others know that it’s going on, and it’s particularly department heads and so on. We often turn a blind eye to this, and it’s a culture that exists and that we need to stop,” Freyer said.

Freyer added that there is a forthcoming resolution regarding graduate students and faculty members, but the committee chose to initially focus on solely undergraduate students.

At the same meeting, members of the Student Affairs Committee also presented a report on the Student Quality of Life Survey for the 2017-18 school year, which will be fully released later this week. According to the Student Affairs Committee, the report showed an overall increase in general student satisfaction with the University but lower satisfaction with mental health, the administration, funding and fitness, services for students with disabilities, and services for the LGBTQ community.

In light of these findings, the Student Affairs Committee recommended the creation of dedicated testing rooms to increase accessibility for students with disabilities, an online request form for accommodations with the Office of Disability Services, and an LGBTQ resource center.