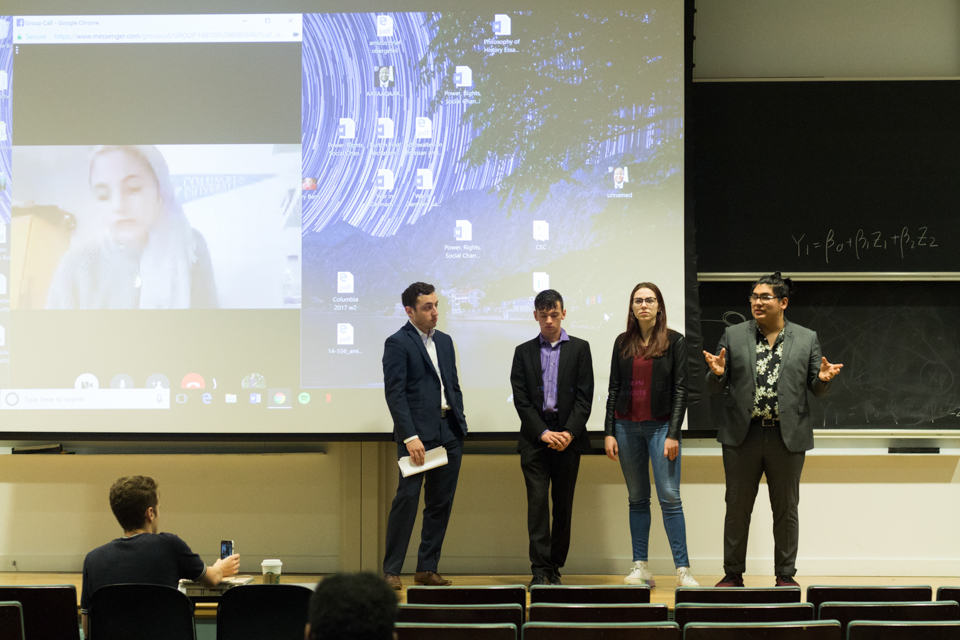 The five Columbia College candidates for University Senate, above, focused on issues of sustainability, campus space, and financial accessibility.

Candidates for the Columbia College and Engineering Student Council presented platforms on issues of campus space for students, mental health, and accessibility for low-income students at the candidate debate on Sunday.

The debate was co-hosted by Spectator and the newly formed CEC to give students an opportunity to hear from candidates and ask them questions. The auditorium where the debates were held, however, remained largely empty throughout the day and the livestream of the event never reached more than a handful of viewers.

Most candidates, who had no opponent to debate with, stood on the stage alone. For some positions, no candidate showed up, meaning that those races will be postponed until fall elections next semester.

Positions for Senate representatives, however, were heavily contested, with five candidates competing for three CC seats and two candidates for one SEAS seat. The CC candidates focused on issues of sustainability, campus space, and financial accessibility.

Both Toqa Badran, CC ’19, and Alfredo Dominguez, CC ’19, advocated for reserved spaces for students in the newly renovated Uris building. Badran highlighted her experience in the Uris Space Committee, while Dominguez expressed his desire for Latinx students to have a space similar to the Malcolm X Lounge in Hartley Hall. They both also expressed their desire to make Columbia more accessible to low-income students, with Badran promising to combat housing and food insecurities.

Danielle Resheff, CC ’20, spoke about her struggle with an invisible disability and her desire to make campus as accessible as possible for all. She also proposed the creation of an events council that could incorporate multiple groups in order to facilitate programing and community-building.

Jonathan Schleien, CC ’20, talked about his past experience as University Senate staffer and his proposals both to have Dodge Fitness Center stay open for 24 hours and to improve student advising by having all students choose their own advisors.

In the engineering race, Cindy Soifer, SEAS ’20, and Zoha Qamar, SEAS ’19, debated how their respective platforms would best represent the SEAS student body. They both highlighted their past experience: Soifer as a University Senate staffer who had a role in promoting the Columbia Food Bank, and Qamar as the current Vice President of Policy for ESC and her role in pushing for free pads and tampons on campus.

However, due to the lack of opposition for most seats, certain student platforms were unsubstantial and uninformative. Candidate for Professional Development and Alumni Affairs Representative Dean Kieserman, SEAS ’20, opened his address by saying, “Hello, my name is Dean Kieserman, please vote for me.” Kieserman later elaborated on his proposals when questioned.

Candidate for 2020 class president, James Ritchie, CC ’20, expressed his frustration at the number of uncontested races.

“I think it’s quite frankly embarrassing that our ticket is running uncontested this year, except for myself,” he said. “It’s humiliating and I think it says a lot about how people feel about student council.”

Ritchie’s opponent did not arrive.

For the remaining races that were contested, candidates presented a diverse array of arguments as to why they would serve the position well. In CCSC, Roar Lion Roar’s candidate for senior class president, Mina Mahmood CC ’19, debated Daniel Parks, CC ’19, who is running without a ticket. Mahmood, current junior class president, presented specific proposals for engaging with the Harlem community and making events more financially accessible.

Parks expressed his desire for students to enjoy their senior year by promoting more class-wide social events, which he proposed should be subsidized for low-income students.

“There was a time in the beginning of the year when the Republican students’ club invited speakers who threatened my own being, my identity, my race, my religion and I wondered, was this really the place for me?” she said.

Meanwhile Nikola Danev, CC ’20, proposed international alumni mixers as well as 24-hour access to food and study spaces for students who stay on campus during breaks.

In the race for the 3-2 Combined Plan Representative, candidate Ishraq Khandaker, SEAS ’19, proposed expanding resources for combined planned students without guaranteed housing. His opponent, Tracy Paltoo, SEAS ’19, suggested connecting seniors to juniors to pass on their knowledge navigating the process.

Voting will be open here from April 9 until April 11. Election results will be released on April 12 by midnight.