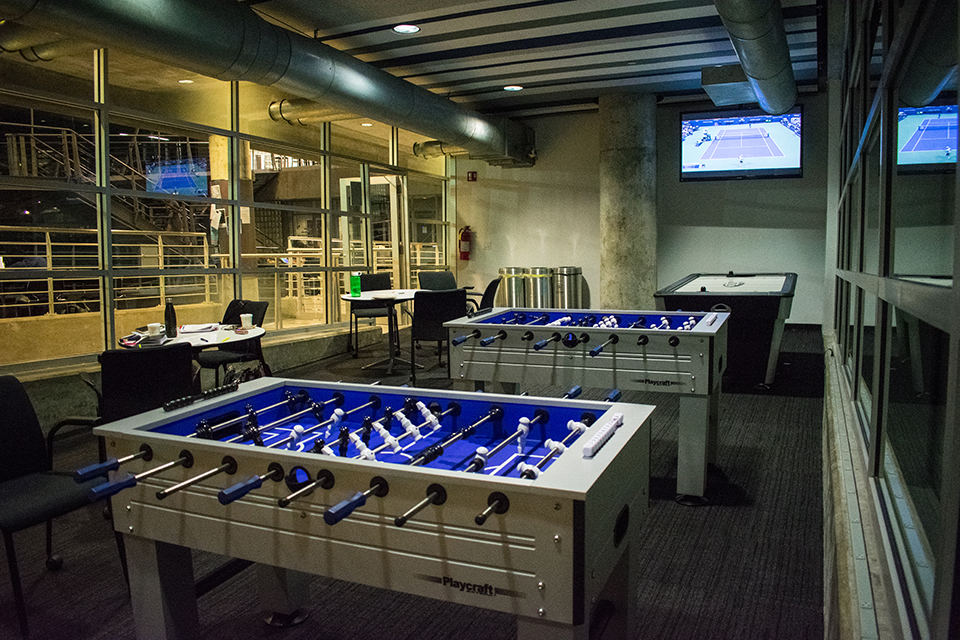 The Student Affairs Committee approved the space—replacing the East and West Ramp lounges—in the spring of 2018 as a response to student concerns over the lack of recreational space.

Lerner Hall was renovated this summer to include two non-reservable social lounges with air hockey tables and foosball on the main floor, part of an effort to bolster a stronger sense of student community in the building.

The Student Affairs Committee approved the space—replacing the East and West Ramp lounges—in the spring of 2018 as a response to student concerns over the lack of recreational space. Though Lerner is supposed to function as a student center, it has been criticized for its serving as the home of many administrative offices, conference rooms, and unused storage rooms.

Though renovation was approved in February, the University did not begin construction until this past summer out of concern for disrupting students studying for finals and end-of-year club meetings.

Former University Senator and SAC co-chair Josh Schenk, CC ’19, advocated for both the short- and long-term renovation of Lerner Hall as a means of building community without compromising meeting space.

“We wanted to look into Lerner Hall specifically, because it is the closest thing Columbia has to a traditional student center as a place for students from all different schools to come together,” he said.

Students also cite the open lounge as a new space to relax, including Andre Martins, Journalism ’20, who said he commutes to campus and needs a place to stay between his classes.

“I have time to kill [and am] constantly looking for spaces on campus where I can decompress,” he said. “I really welcome this atmosphere, and I think they should definitely expand on it and keep pushing to have more of these casual spaces.”

Despite the positive reviews, some point to a prevailing space issue and a broader lack of community.

“[It] seems plausible but in terms of community building, will I meet people here and hang out with people here? I’m not sure,” Collin Burns, CC ’21, said.

In a similar effort to make campus spaces more community-oriented, John Jay, Carman, Wallach, and Furnald lounges will have increased hours for student use, will exclusively host community programming Monday through Thursday, and will only be available for reservation by student groups from 9 a.m. to 6 p.m. Friday through Sunday.