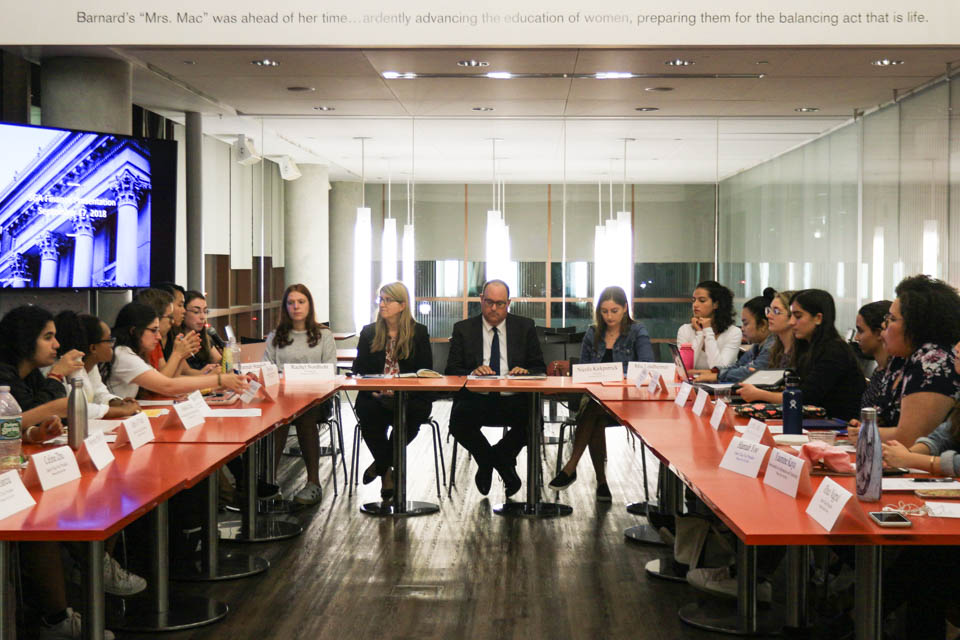 Goldberg addressed student concerns about funding for low-income students for services including laundry, meal plans, textbooks, and work study. With the recent departures of a number of student-facing Barnard deans, such as former Dean of the College Avis Hinkson, many students have been left wondering if the current administration will continue projects that were started to support low-income students.

Representative for Academic Affairs Solace Mensah-Narh, BC ’21, asked about a recent change to the college’s work-study program that led to a decrease in the salary and maximum hours alloted to low-income students. In response, Goldberg told her to consult Student Employment Services.

“[The vacancies] are being thought through,” Goldberg said. “We never want a situation that because there are vacancies, there are holes. [Associate Dean of Studies for Student Success] Gedeon and others are working on this, so I would ask them for details to keep making sure that those [programs] the deans were working on have continuity.”

Junior Class Vice President Celine Zhu, BC ’20, pointed out how the installation of new laundry machines has left SGA’s initiative to subsidize laundry for low-income students obsolete. Goldberg replied that there would inevitably be issues to resolve given the change in laundry service and directed students to the resources for low-income students offered by Director for Financial Aid Nanette M. DiLauro.

Similar concerns were brought up by Representative for Campus Affairs Chelsea Sinclair, BC ’21, about rolling laundry costs into yearly tuition. Goldberg was open to the idea of incorporating student input in discussions about laundry with the hope of implementing new policies by the fall of 2019.

Representative for Inclusion and Equity Tirzah Anderson, BC ’21, also asked Goldberg about the allocation of space for cultural affinity groups at Barnard, and Goldberg explained that the need for the funding as well as the limited availability of space inhibit each affinity group from having its own space.

Goldberg expressed interest in gathering student input regarding these issues, especially for the allocation of space in the LeFrak Center and the recently opened Milstein Center. Sinclair suggested creating focus groups and sending mass emails to engage and give a voice to marginalized students on campus.

Di Benedetto discussed the progression of Barnard’s endowment over her tenure, highlighting that the endowment broke the $345 million mark this past July, a 63 percent growth compared to $212.1 million in 2008.

Despite the growth of the endowment, Barnard continues to have a very small endowment compared to other similarly sized liberal arts schools.

“Barnard was built on an idea, not an endowment,” Goldberg said. “There was never a historical priority on fundraising in the way there was in other schools ... It was only about a decade ago that we started taking [the endowment] issue seriously, and now we’re playing catch-up.”