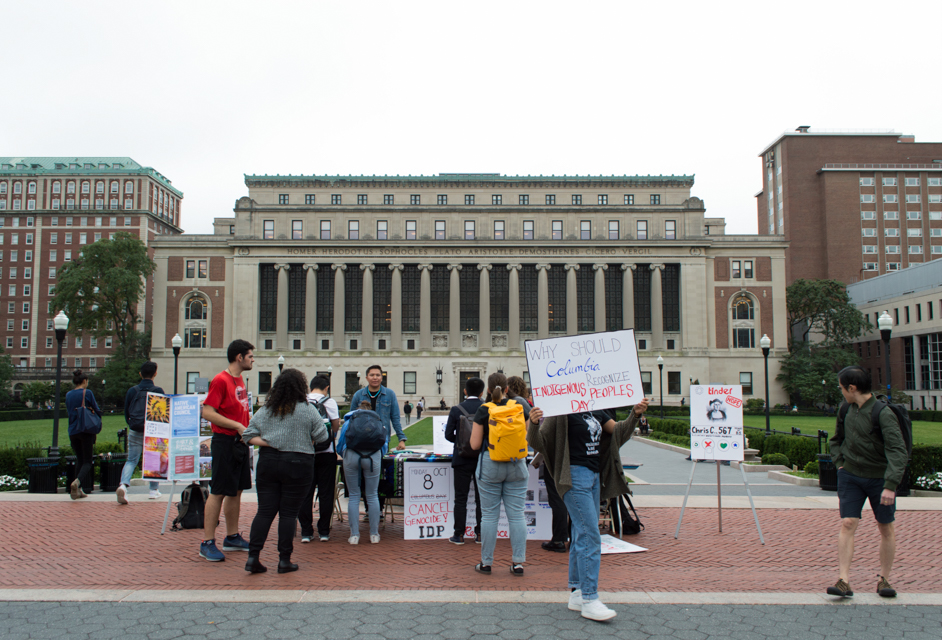 NAC’s Facebook post states that the petition aims for Columbia to “acknowledge the stolen lands and bloodshed that allows for the existence of this institution.”

Columbia’s Native American Council has gathered over 1,000 student signatures in just one day on a petition calling for Columbia to recognize Indigenous Peoples’ Day as an official University holiday.

Currently, Columbia does not officially observe either Indigenous Peoples' Day or Columbus Day. NAC co-president Kendall Harvey, CC ’19, said that the Council is writing a proposal based on the petition to be submitted to the Board of Trustees this summer in order to get the holiday included on Columbia’s official list of observed holidays. Of the eight Ivy League schools, Harvard, Brown, and Cornell all recognize Indigenous Peoples’ Day as an academic holiday.

NAC’s Facebook post states that the petition aims for Columbia to “acknowledge the stolen lands and bloodshed that allows for the existence of this institution.”

“There’s largely two avenues that student groups like ours can take, one being very anti-Columbus Day and resisting the idea of Columbus and his legacy. And the other side being pro-Indigenous Peoples Day,” Harvey said. “I think this year we’re trying to be a little more anti-Columbus to get the name recognition by the University … [but] we’re also trying to get other people to honor and celebrate Indigenous culture and just Indigenous existence.”

In an email to Spectator, Associate Vice President for Student Life Ixchel Rosal wrote that her office is “looking forward to continuing to work with the Native American Council as we think about the variety of ways this important day can be recognized at Columbia.”

NAC’s petition was just one of today’s student-led initiatives pushing for the University to acknowledge its historical ties to marginalization. The Columbia University History Tour Initiative was also launched today by Tommy Song, CC ’20, Xavier Dade, CC ’20, and Donovan Simpson, CC ’20. The Initiative includes an iOS app that will be released later this week and provides a virtual historical walking tour of the lower half of Columbia’s Morningside campus.

The app’s interactive interface will allow students to engage with the narratives of slavery, violence, and social resistance that permeate many buildings on campus.

“If you are part of an organization or institution, you should know the history of the place you are a part of,” Song said. “The University does not want to emphasize some aspects of their past. … I think there is definitely an element of justice that is involved, especially with the idea of publicizing the fading narratives of this institution.”

The app utilizes research from Columbia University and Slavery, a project started by Eric Foner and his class of undergraduates in 2015 to explore the University’s connection to slavery.

Although the app is being launched this week, students have previously called for tours of locations on Columbia’s campus that they said were affiliated with white supremacy. Last spring, the Liberation Coalition led a tour denouncing these locations and calling for them to be replaced with monuments of women and people of color.

“The idea of this kind of a tour did not start with me,” Song said. “It was there all along—all I did was try to make it happen. There have been many members in the past who have tried to make it happen, namely students of color and various identity-based organizations.”