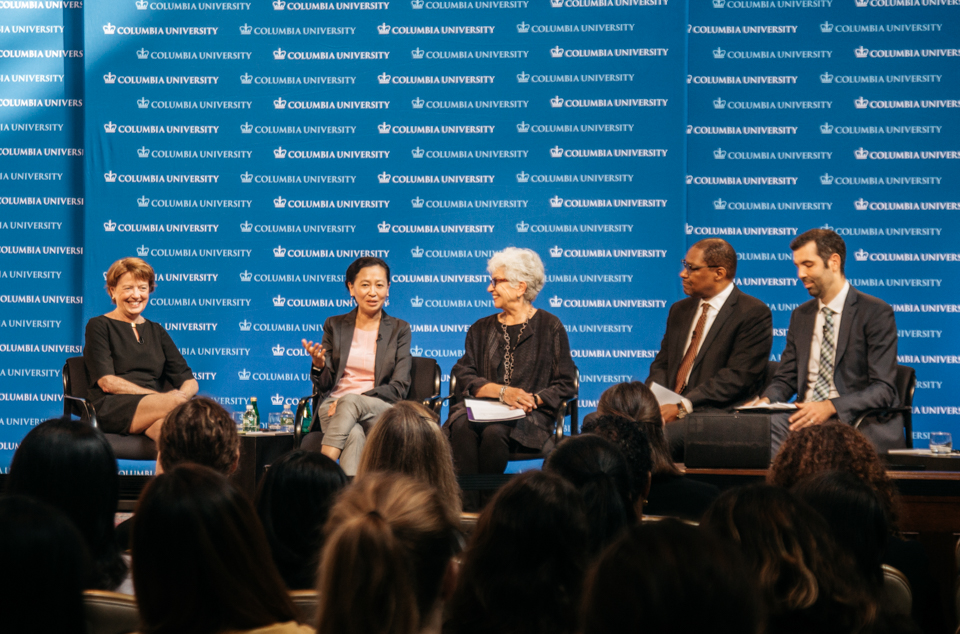 The event was sponsored by HeForShe, a United Nations initiative started in 2014 that aims to increase male participation in the fight for gender equality.

United Nations officials and Columbia faculty members discussed the progress made by women in traditionally male-dominated science, technology, engineering, and mathematics fields, along with the pipeline challenges that still remain, at an event in Low Library on Wednesday morning.

The event was sponsored by HeForShe, a United Nations initiative started in 2014 that aims to increase male participation in the fight for gender equality. Student leaders from Columbia’s HeForShe chapter assisted in organizing the event. Executive Vice President of University Life Suzanne Goldberg introduced the speakers: Elizabeth Nyamayaro, head of the HeForShe movement and senior advisor to the UN Women Executive Director, and Julien Pellaux, strategic planning and operations adviser for UN Women.

Less than 16 percent of faculty members in engineering are women, newly released data from the Office of the Vice Provost for Faculty Diversity and Inclusion shows. Last year, Columbia announced a 100 million dollar commitment to faculty diversity, on top of an 80 million dedicated previously, and has recently announced it will expand pipeline programs that encourage undergraduates of color to apply to Ph.D. programs in STEM-related subjects. Because of the lack of students of color in graduate programs, Columbia and other elite universities often poach faculty members from one another, leading to a stagnation in the number of minority faculty members across the country.

During the event, Dean of Engineering Mary Boyce said the School of Engineering and Applied Science has made great achievements toward gender parity in undergraduate classes, pointing to a first-year class that is 49 percent female, which is unusually high for engineering schools nationwide. However, SEAS still faces a significant gap in gender parity within its faculty.

“We want to do better, we need to do better, and everyone needs to be better,” Boyce said. “Because the presence of women attracts other women.”

Dennis Mitchell, vice provost for faculty diversity and inclusion for Columbia University, emphasized in the discussion the need to foster a culture of inclusion within departments in order to increase faculty diversity, both in terms of gender and race.

“If we’re not having that kind of environment at Columbia University, who is supposed to do be doing it? We need to ensure that we are putting resources in place so that can occur,” Mitchell said.

Biomedical engineering professor Helen Lu said that although more women are entering graduate STEM programs, many are reluctant to enter academia because the demands of the tenure track are not sustainable with child care and family life.

“The challenges ... are how do you plug the leaks, close the pipeline, as you go forward to the next stages?” Lu said.

Many of the speakers alluded to today’s political climate as a reason why fighting for gender equality is especially important. After the discussion, students questioned the speakers about how they will protect female students and faculty from sexual harassment and assault.

In response, Goldberg listed the resources available to students regarding sexual misconduct and reiterated the University’s commitment to the issue.

“One of the ways we change the conversation on these issues is to strengthen the fabric of our community and to build our community,” Goldberg said.

Boyce and other female professors shared their personal experiences as graduate students and junior faculty in STEM fields, expressing gratitude for the male mentors who supported them but reiterating the importance of having female role models.

Though Boyce had few women peers and even fewer women mentors early in her professional career, she said those she did work with were unconditionally supportive of each other.

“Women are in it for women too,” Boyce said.