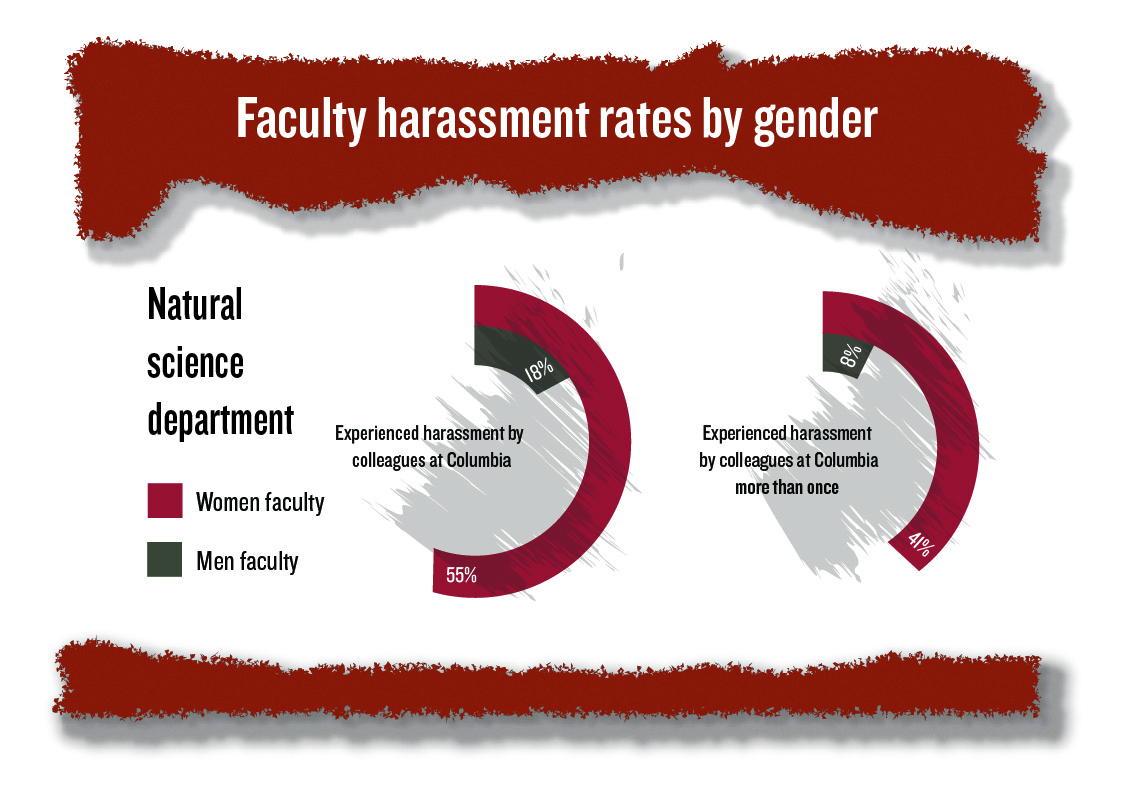 Responses gathered from nearly 50 percent of faculty across Arts and Sciences reveal significant concerns about Columbia’s ability to sustain long-term growth in populations of female and URM faculty members.

Departments within the Arts and Sciences at Columbia will require substantial cultural and policy-level changes in order to rectify disparities faced by women and underrepresented minority faculty when compared to their white male colleagues, according to an extensive internal report released Thursday.

The report—a 145-page document of findings and recommendations commissioned by the Policy Planning Committee of the Arts and Sciences over two years—was prompted by stagnant levels of faculty diversity across Arts and Sciences. In order to assess the equitable treatment of female and underrepresented minority faculty members, three divisional committees studied faculty experiences and the distribution of resources within the natural sciences, social sciences, and humanities departments through online surveys, in-person interviews, and statistical data collection.

Responses gathered from nearly 50 percent of faculty across Arts and Sciences reveal significant concerns about Columbia’s ability to sustain long-term growth in populations of female and URM faculty members. The majority of responses alluded to an overarching concern that Columbia lacks transparency regarding promotions and raises, fails to provide sensitivity training for leadership positions, and does not have proper reporting avenues for instances of harassment and discrimination.

The report also illustrates that diversity is poor for many Arts and Sciences departments, which largely approach diversity hires through replacement processes dependent on faculty growth, rather than on an incremental and sustained approach. Columbia has allocated $185 million to faculty diversity efforts since 2005, but only sustains diversity hires within departments for three years. Percentages of black and Latinx faculty have remained largely stagnant during the past 10 years, recent data from the Office of the Vice Provost for Faculty Diversity and Inclusion has shown .

While the report lays out a series of extensive recommendations to address problems laid out over nine main areas for investigation, in addition to a new Committee on Diversity and Equity dedicated to redress those problems, administrators emphasized that many suggestions require long-term attention, vigilance, and broader restructuring.

“A lot of the recommendations are quite aspirational as opposed to really concrete solutions because a lot of these problems are deep, long-lived societal problems that have been with us for centuries or millennia, so we can’t solve them overnight,” interim Executive Vice President of Arts and Sciences Maya Tolstoy, who spearheaded the report during her tenure as chair of the PPC, said.

However, the report makes clear that current mechanisms for reporting these incidents are insufficient, as is evident through the disproportionately low number of reports filed to the Equal Opportunity and Affirmative Action. In the natural sciences, 55 percent of female respondents said in the report that they had been harassed while 65 percent said that they had been discriminated against by colleagues, but only one female employee filed an official complaint with the EOAA. 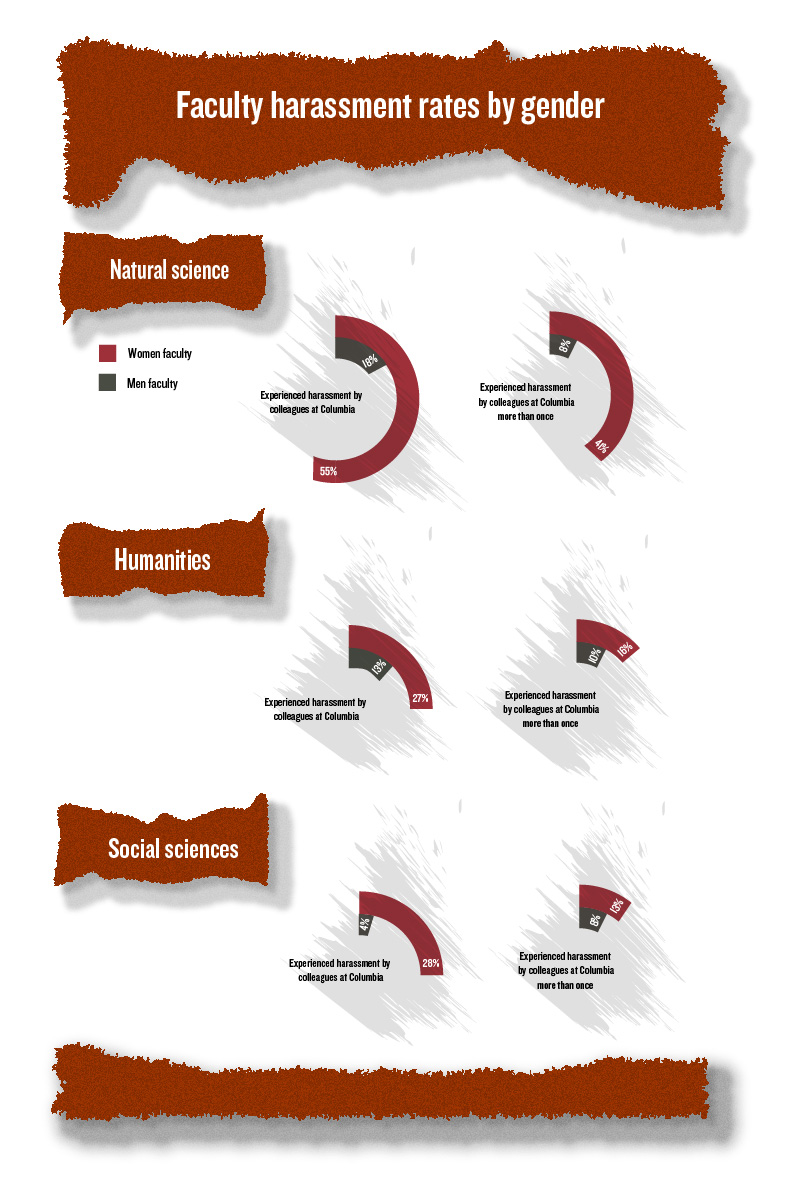 According to Tolstoy, who replaced former EVP David Madigan in the position this fall, the committee has begun revisions into departmental bylaws to increase transparency surrounding promotions and salary increases to address such broader cultural issues. Particularly, these changes are intended to minimize the need for the common practice of obtaining outside offers as a mechanism for negotiation—offers which female faculty members, often more dissatisfied with departmental culture, are twice as likely to accept. They also hope to more immediately look at how chairs are elected and how hires are conducted, particularly to outline clear policies detailing each process.

More tangibly, the equity report also recommends that faculty in leadership positions receive mandatory training on issues related to race and gender in the workplace—currently, Columbia has no mandatory sensitivity training for any faculty members regarding issues of identity. However, in light of the University’s push to increase faculty diversity, faculty members must be more conscious of their own personal biases, and faculty interviews particularly emphasize the existence of an “old boys club,” the report detailed.

“Most distressing of all is that this climate trickles down to students: inappropriate comments and behavior,” an anonymous faculty member said in the report.

While the report delineates definitive steps that need to be taken, faculty believe that part of the value of this report comes from its potential to open up a dialogue and break down implicit biases.

“As a faculty member, it’s really very important to try to understand how my colleagues face the same kind of problems that I do. If you see that there are problems that concern everyone, mostly, it makes it easier to talk about that. … I’m going to think about things in a different way after participating in this process,” Pablo Piccato, professor of Latin American history, social sciences executive committee chair and natural sciences executive committee member said.

While Tolstoy said that the report was received positively by many faculty members, some objected to the exclusion of certain perspectives during in-person interviews. In particular, these interviews focused on experiences of women and URM faculty members, but did not interview white, male faculty.

“If you only choose one side, you are far less likely to solve the problem than if you are if you talk to everybody,” Astronomy professor James Applegate said. “If you talk with somebody, that person is now engaged and takes ownership of the process. … [Then], even if I don’t agree in the end with any of the recommendations in the report, I’ve at least been a part of it.”

However, those involved in conducting the survey believe that the issuance of such a report reflects positively on Columbia, particularly as it moves toward increased transparency with its shortcomings and goals around faculty equity.

“I think we can really set a good example to other institutions by [taking] the right actions to increase not only diversity, but also equity through making an active decision to increase transparency,” Maria Uriarte, PPC chair and ecology, evolution, and environmental biology professor said.