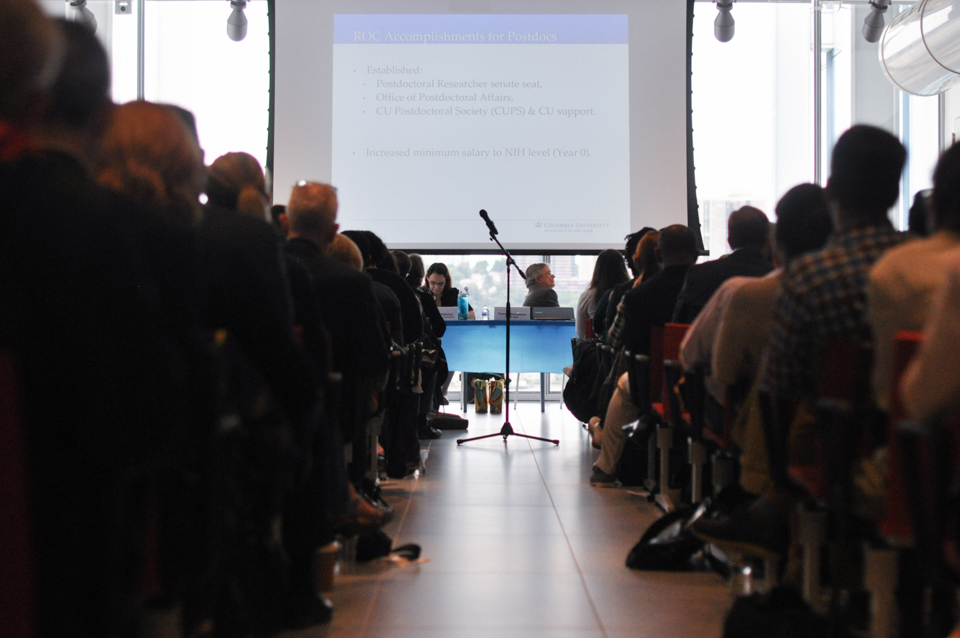 Following the passing of the resolution in support of freedom of expression after months of debate, senators expressed concerns regarding vague principles in the policy at a plenary last spring.

The University Senate’s Commission on Diversity emphasized the need to revisit conversations on Columbia’s free speech policies and the impact of controversial speakers on students at the senate plenary on Friday.

The commission’s suggestion comes as a part of a series of recommendations to assess student climate at the University as it relates to diversity. The Commission on Diversity, a subcommittee of the senate created in 2014 to address issues regarding student diversity, collected data about race and ethnicity across all of Columbia’s schools and compared its findings to statistics from peer institutions. In light of these findings, which demonstrate a relatively high but stagnating percentage of underrepresented minorities at Columbia’s undergraduate schools, the commission highlighted the need to continue collecting data and evaluating progress.

Last spring, the senate adopted a resolution in support of freedom of expression after months of debate, reaffirming a commitment to free speech under the First Amendment while also calling for future town halls that facilitate open discussion regarding controversial topics. Following the passing of the resolution, senators expressed concerns regarding vague principles in the policy.

At the plenary, the Commission on Diversity reiterated a need to further examine the University’s policies on free speech, particularly through meetings with student groups who have been outspoken about such issues. However, the Senate has not yet set up meetings with Columbia University College Republicans or the Black Students’ Organization.

The commission also focused on the need to standardize data collection regarding student demographics, referring to newly released data on Columbia’s faculty diversity as a potential model for consideration. The commission cited the lack of a standardized system as a possible reason for the high rate of students who choose not to report their race or ethnicity. According to the commission, this rate—6.2 percent—is higher than that at every other peer institution but New York University, where 9.2 percent of students choose not to share this information. Harvard had the lowest rate: 4.7 percent.

In addition to discussion about student diversity, the Committee on Information and Communications Technology also spoke to the need for more classroom space on campus, particularly as faculty said they have not seen progress toward getting classrooms on the Manhattanville campus despite Bollinger’s promise to do so.

“We’re getting more students every year, and more courses, but we’re not getting more classroom space,” Julia Hirschberg, chair of the computer science department and co-chair of the CICT said. “Some of the questions that arose in our joint meeting was why there are no classrooms planned for Manhattanville. Unfortunately, our president is not here to answer that question.”