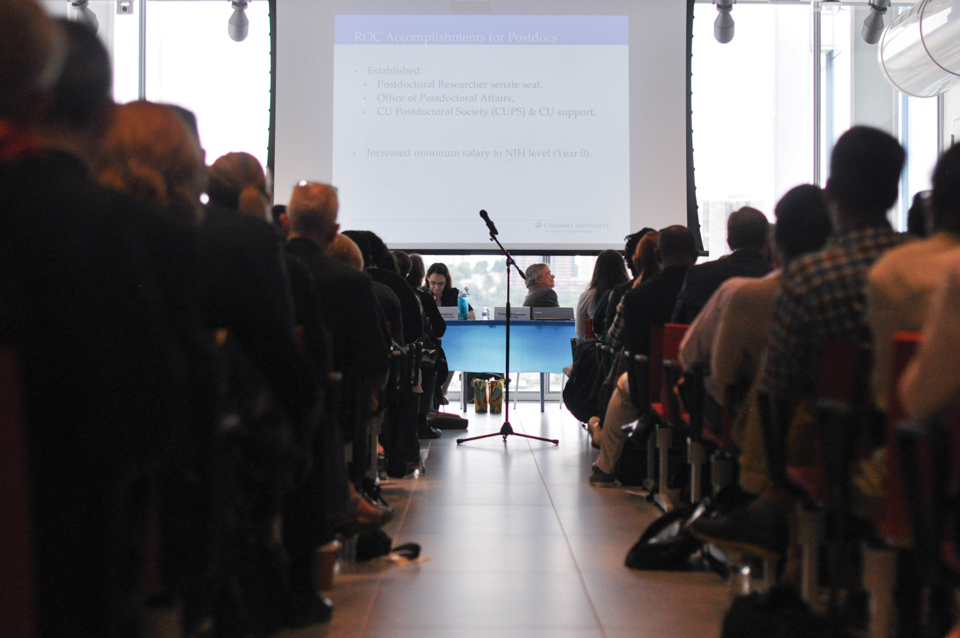 Out of 20 students interviewed by Spectator, only eight knew their student representatives, and 13 of the 20 could neither define the function of the senate nor how the body impacts student life.

Last April, the University Senate passed a historic resolution that made Columbia one of the last universities to forbid all romantic and sexual relationships between undergraduates and faculty members.

But when students returned to campus in the fall, one sentence had been quietly removed from the new policy: “At all times, the institutional response shall keep the students’ educational aims and needs foremost.” Neither the Faculty Affairs nor the Student Affairs Committees—the two bodies that spearheaded the creation of the policy—seemed to be aware of why, or how, the policy was changed.

“If the senate approves something, but if it goes back to [make] changes that senators weren’t informed of, what’s the point of us voting for anything?” School of Social Work senator David Cheng said at the November plenary.

The covert revision of this policy is part of a broader pattern of opacity in the Senate, a governing body charged with setting University policy and serving as a conduit between students, faculty, and administrators, yet one which still remains enigmatic to many students.

Interviews with a dozen current and former senators show that, despite opportunities for student involvement within the Senate, the prevalence of closed committee meetings—where significant dialogue occurs and pivotal decisions are made—leaves a majority of the student body in the dark. Senators also sign legally binding non-disclosure agreements that bar them from publicly disclosing what happens in closed meetings, even when directly questioned by their constituents.

Meanwhile, senate plenaries, the only public-facing fora for discussion, often see low rates of participation and merely focus on procedural formalities: Over the past year, the attendance rate of voting members hovered at just over 60 percent. A number of senators haven’t attended a plenary in years.

Consequently, students outside the senate don’t view it as a channel to voice concerns and often make little effort to be informed about the basic mechanics of the governing body. Out of 20 students interviewed by Spectator, only eight knew their student representatives, and 13 of the 20 could neither define the function of the senate nor how the body impacts student life.

One year after Columbia’s historic 1968 protests, the University chartered the creation of the senate to act as a previously nonexistent channel for open communication between students and administrators, aiming to provide a means through which students and faculty could participate in behind-the-scenes processes of administrative decision making. Twenty-four out of 108 voting seats are held by students, who form the second largest voting body in the senate and are also represented in 16 of 18 subcommittees, which address a range of issues pertaining from diversity to the budget.

While most decisions are made behind closed doors during confidential standing committee minutes, public plenaries, which take place eight times over the course of an academic year, are intended to provide non-senators the opportunity to remain informed about relevant policies. Recent resolutions passed through plenaries include the creation of a new African-American and African diaspora studies department, resolutions on freedom of expression, and the policy banning faculty-undergraduate relationships.

According to Sharyn O’Halloran, chair of the senate executive committee, which sets the agenda of each plenary and collaborates closely with Columbia’s board of trustees, the senate serves as an opportunity for “shared governance” and discussion across all schools of the University.

“The University Senate provides a forum for discussion, debate and the making of policy to ensure good governance for the good of the entire University,” O’Halloran said in a statement to Spectator. “This shared governance works because of the dedication of everyone involved on behalf of the University.”

However, these ideals of shared governance haven’t always been realized.

“I really think, given its history in 1968, [the senate] should be a place where students can have a real voice, and I think by the time I served on the senate, that was no longer possible,” former senator Jared Odessky, CC ’15, said. 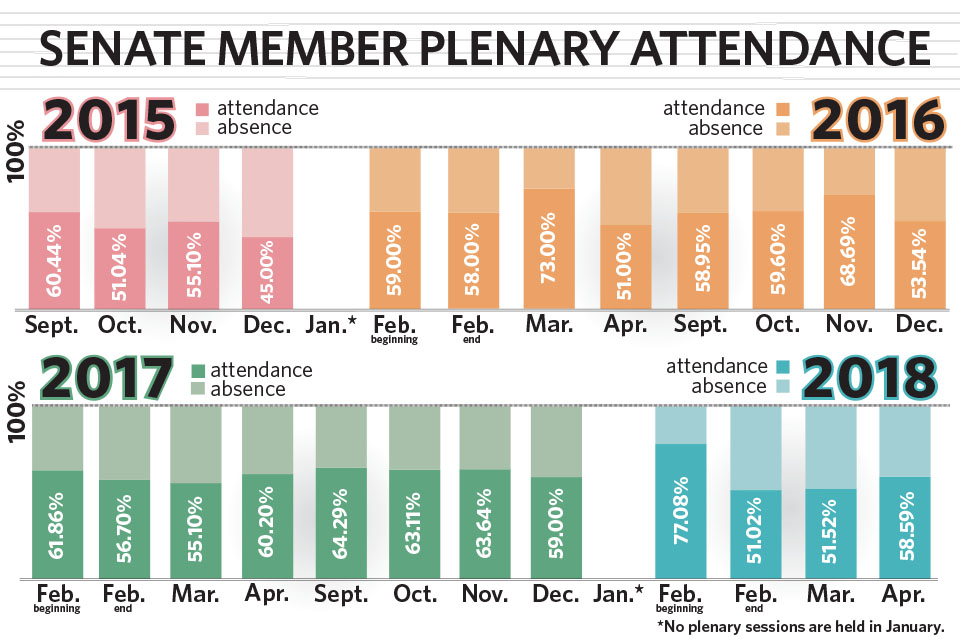 The complexities behind the process of bringing topics out of committee meetings and into the plenary can prevent important points from being conveyed to the student body at large, shutting down opportunities for external input and discussion, according to some student senators.

Ramis Wadood, CC ’16 and former senator, emphasized the difficulty of conveying to the public what occurs within a standing committee due to overly bureaucratic barriers.

“We struggled even getting the bullet points to trickle down to students. Any time we wanted to take something out of the committee, it was multiple meetings, multiple conversations, compromising—‘You can’t use this word, that word’—just to get out an empty statement about what’s going on in the executive committee, education committee,” he said.

The closed nature of the meetings encourages students and faculty to have open and honest discussion without worry of censorship, according to senator James Applegate, a professor of astronomy. Other senators, however, have expressed worry that the lack of transparency for students uninvolved in senate procedures also exacerbates issues of accountability, as students cannot view committee meeting minutes to determine how well their concerns are represented. For senators themselves, it also becomes more difficult to gauge the extent to which they are successfully generating dialogue around issues relevant to the student body.

“When you have a black box and you can’t get feedback, there’s no way to ensure that you’re representing your constituents’ interests accurately,” Odessky said.

While senate committees are able to directly reach out to student groups to come speak in meetings, Wadood added that there are unnecessary burdens on students to approach senators for particular issues that they want to be addressed by the senate, which ultimately deters students from seeing the senate as a possible outlet for activism. When the commission on diversity asked the Black Students’ Organization and Columbia University College Republicans to provide input on policies regarding free speech in the past year, both groups declined to comment.

“I found it to create an unnecessary burden on students’ behalf, given the way that meetings were set up,” Wadood said. “All they would have to rely on is my word that I brought something up that they wanted me to bring up. … I’m of the opinion that committees are where activism goes to die.”

For the graduate student union, outreach from student affairs committee allowed it an opportunity to outline relevant concerns such as grievance procedures for sexual misconduct and late pay. The SAC also invited Provost John Coatsworth to speak, and the next day, he reached out to the union for further discussion, according to union bargaining committee member Rosalie Ray.

“It’s the students that see this as an important thing, and that matters for how the decisions get made,” she said.

Ray, however, added that there’s no system of accountability for this type of outreach, given that there’s no public record of whether or not it occurs on a regular basis.

“Good senators do a really good job. It’s just that there doesn’t really seem to be any mechanism in place for anybody to report back or to be transparent or accountability to be a good senator. It was just the fact that the student [affairs] committee this year … helped get stuff done,” Ray said.

This lack of transparency and accountability extends beyond the senate’s relationship with non-senators; even current senators do not have access to minutes besides those of their own committees. Discussions around the faculty-student relationships policy at the November plenary revealed additional widespread confusion throughout the senate over how decisions should be communicated between Columbia’s general counsel and senate subcommittees.

In particular, senators decried the purpose of having a public plenary for senate-wide votes if policies can be changed outside these meetings without proper use of summer powers—meaning that the policy change was not sanctioned by senate rules, according to College of Physicians and Surgeons senator Jackie de Vegvar.

At the November plenary, SEAS senator Zoha Qamar called the revisions “insidious” for undergraduate students, particularly given that the policy was spearheaded by the SAC but was ultimately never passed by the committee for review.

“Every sentence is substantive. The words matter because they are legal concerns,” Qamar said at the meeting.

“Somewhere along the line, not all connections were made. We all agreed in faculty committee this was not the version we voted on,” added co-chair of the faculty affairs committee Letty Moss-Salentijn.

Faculty senator John Mutter, who sits on the budget committee, said that the general lack of information transmitted between committees often means that he does not have the proper background information to vote on issues presented in plenaries. As such, he has not attended a single meeting this year.

“Nothing in budget committee ever comes up in plenary,” Mutter said. “If there was something related to the budget committee that came up in the plenary, I would make every effort to go. Most of what happens at the plenary relates to things that I’m not very conversant with.”

Additionally, Mutter emphasized that senators are pushed to attend plenaries merely to achieve quorum, the minimum number of voting members required to pass policies, in light of low interest.

“The relatively low attendance at the plenary tells you that it’s not riveting,” Mutter said. “We’re often sort of solicited to go at the time when there’s going to be a very important vote on something like the start of a new program, and there has to be a quorum and you can’t send in a proxy vote.”

Wadood said that he believes there was only so much advocacy he could do while in the senate, as it discourages democracy and community participation. Until fundamental changes are made, Wadood said there are more effective routes available to students who care about activism.

“I think I failed when it came to advocating for students,” he said. “The senate is an unfair and conservative institution. … Until it decides to reform itself, student senators’ priority should be telling students to find another place to make progress.”