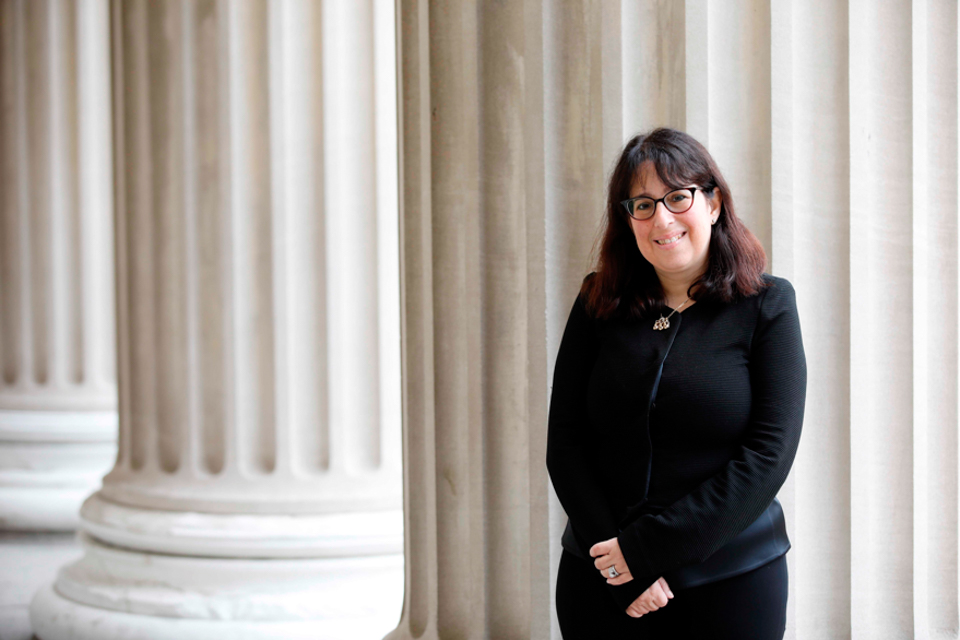 Rosen-Metsch is the first GS alumna to be dean of the college since its founding.

Finishing her first year in charge, Dean of General Studies Lisa Rosen-Metsch, GS ’90, has moved swiftly to address the growing needs of the school, renewing fundraising efforts to better engage its alumni, increasing resources for its significant veteran population, and establishing herself as an accessible administrator among the student body.

Rosen-Metsch took on the role after former Peter Awn, who served as dean for 20 years and was well-loved by the student body, stepped down at the end of the fall 2017 semester. The first GS alumna to be dean of the college since its founding, Rosen-Metsch graduated from the joint program with the Jewish Theological Seminary with degrees in sociology, history, and philosophy, and later served as a professor at the Mailman School of Public Health. Her work focused on HIV prevention among populations with substance abuse problems.

GS has struggled to address this perennial lack of funds despite being a significant revenue driver for the Arts and Sciences, Columbia’s core body of five schools which also includes Columbia College. Unlike Columbia College, GS—where over 40 percent of students are on Pell Grants—is unable to provide need-blind financial aid for its students. The difference is statistically glaring: In 2017, 43 percent of Columbia College tuition and 44 percent of Columbia Engineering tuition was returned to students as a form of aid, while GS only saw a 29 percent discount rate.

As Awn prepared to leave the role in late 2017, he cited funding for financial aid and increased student housing options as two of the most pressing needs that his successor would face.

Rosen-Metsch has taken these needs in stride, citing both as “among the highest priorities” of her tenure, and expressing enthusiasm at the chance to meet students and staff along the way.

“It is a deep honor to be the dean of this school… My experiences getting to know the students and alumni of GS, and the staff and faculty have reaffirmed my excitement and my enthusiasm and how proud I am… we really are the premier school for nontraditional students.

In an effort to provide more financial aid for GS students, Rosen-Metsch said she aims to improve fundraising efforts by creating a stronger infrastructure to engage GS alumni, friends, and family. As evidence of these efforts, GS now has its first associate dean for development and alumni relations, Jill Galas Hickey, and hired three new staff members in the office. During Columbia Giving Day 2018, GS also saw a 20 percent increase in the number of donors and a fifty percent increase in total donations from the previous year.

“[Fundraising and financial aid] are perennially important issues. My dream is to say we meet the full financial needs. If we don’t get there, I hope we make significant progress to get there,” Rosen-Metsch said. “I wouldn’t be doing my job as a dean if I didn’t put financial aid at the top.”

GS, which began as a place for veteran education, also houses an ever-increasing population of veterans, who now constitute more than 20 percent of the student population, and add up to more than four times the total number of veterans at all other Ivy League schools combined. While this alleviates the school’s costs—veteran tuition is subsidized by federal bills—GS also faces a unique set of needs due to its increasingly diverse student body.

Many of the discrepancies between aid at GS and the other undergraduate colleges can be attributed to separate endowments and fundraising efforts. A 2007 central fundraising campaign dedicated most of the money raised for undergraduate financial aid to CC and SEAS students.

In response to these concerns, Rosen-Metsch acknowledged differences between the undergraduate schools, and said that “the thing I can do most effectively is to work on fundraising and development” within GS itself. She cited continued general efforts to provide more resources related to scholarships, fellowships, and alumni development across the board.

During her first year, Rosen-Metsch has also overseen the hire of new staff member for the office of Educational Financing for Veterans Benefits to expand financial resources for GS’s veteran population. Earlier this fall, the end of a decades’ old exemption policy—which previously allowed students with outstanding balances to register for classes despite delayed VA housing payments—left the future of registration uncertain for some veterans. Rosen-Metsch acknowledged the need for greater vigilance and attention toward these issues.

“Those things are really at the forefront for us… Since the beginning, [veterans] have been a core group. We are constantly looking at ways to better support them,” Rosen-Metsch said. “We should always be in the lead in doing what’s best for veterans.”

She has also overseen the creation of the first women’s veterans group at GS in an effort to expand the accessibility of available resources, including inviting alumni to speak to students.

As a GS alumna, Rosen-Metsch emphasized her efforts to interface directly with students and the campus community. She attends General Studies Student Council meetings once a month to provide students with a report on the progress of administrative policies and efforts to address their concerns, holds a number of open lunches through the semester, and maintains a presence in Lewisohn Lounge, the central campus space for GS students.

“One of the hallmarks of Columbia GS is the close relationships with administration… I think all of us in our advisory community… all of us just believe so much in the mission. And that would be what I’m most proud of having maintained,” Rosen-Metsch said.

Rosen-Metsch also acknowledged that the school looked unrecognizably different during her time as a student, and is continuously taken strides forward. However, she said still keeps her own experiences in mind when making connections with students today.

“I am dean today, and hopefully I’ll be dean for a while, but I’m forever a GSer. When students bring up issues… I can very much relate and understand can speak to them not only as a dean but as an alumna,” Rosen-Metsch said. “It’s something that’s really special. I could not be more proud, and this school is such a treasure.”