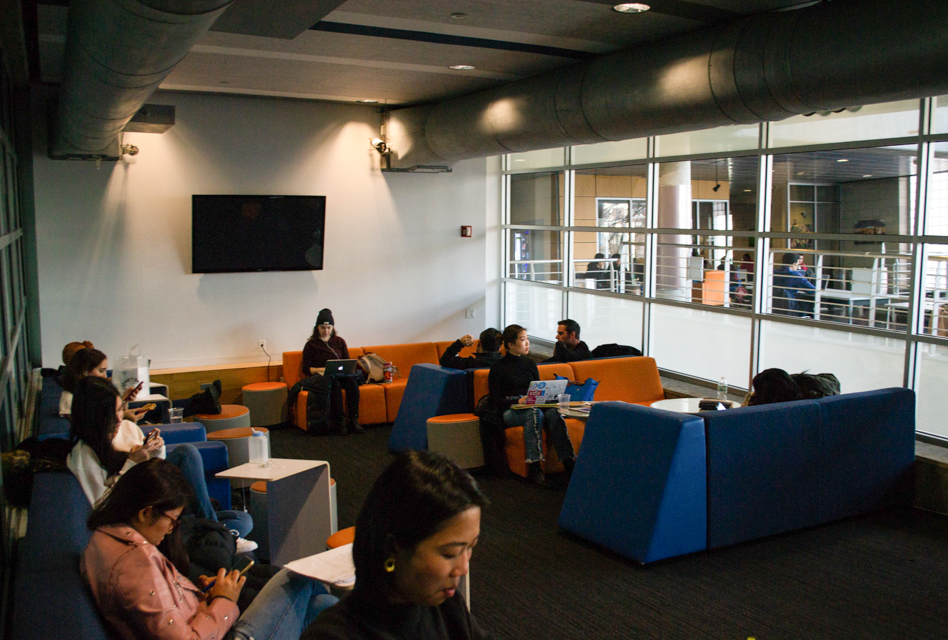 The lounge now features an air hockey table, two foosball tables, Jenga, chess, and other board games. A sign outside the door states: “This is a study-free zone. Please enjoy yourself.”

Lerner Central Lounge, the recently refurbished study-free space dedicated to student recreation, has become yet another study space one semester after its opening.

In response to frequent calls from students for more community-based spaces on campus, the Student Affairs Committee, a subcommittee of the University Senate, generated a proposal in 2017 advocating for the creation of a space for students to relax in Lerner Hall.

At the start of last semester, a lounge on the second floor of Lerner that previously served as a reservable meeting space for student groups underwent significant renovations. The lounge now features an air hockey table, two foosball tables, Jenga, chess, and other board games. A sign outside the door states: “This is a study-free zone. Please enjoy yourself.”

However, only a semester after the lounge’s creation, a majority of students have chosen to utilize the space primarily as another study area, leaving a number of its recreational facilities often unused. At a town hall on mental health in October, a number of students complained that many of their peers often ignored the signs promoting recreation.

Interviews with students working in the lounge demonstrate a preference to use the space to study, as well as a general apathy toward spending time recreationally in Lerner. Since most students are reading or working silently, the lounge is often too quiet for other students to use the equipment provided.

According to Scott Wright, vice president for campus services, the popularity of the space is itself a success of the redesign.

“There’s so many needs for so many kinds of activities in Lerner that the thing that I would consider to be a failure would be if no one was using the new spaces, but they are,” Wright said. “How students are using them, to me, is up to students.”

Jalileh Garcia, CC ’21, said that Lerner Central was her preferred study space, as it is both a relaxed place where students can talk to one another and a space where students are quiet enough that she can concentrate. Garcia has never used the games in Lerner.

“I think that sometimes in libraries ... you feel like you need a space where you can relax a little bit more because you’re sitting down,” Garcia said.

However, Jenna Barufka, CC ’21, said she felt disincentivized from hanging out in Lerner Central due to the number of people studying there.

“If it was a place where people hang out, then yeah, but no one is hanging out in there, people only study there,” Barufka said.

Joshua Schenk, CC ’19 and co-chair of the SAC, said that the increased usage of a previously-reservable student space in Lerner already is an improvement for the lounge. Schenk said that any student who has suggestions may speak to their senate representative or a member of the SAC for feedback, but that SAC has not received any comments about improvements to the lounge.

In response to concerns that students were not using the space for its intended purposes, Wright said that administrators are unable to mandate that students make certain decisions about where to study or relax.

“Challenging Columbia students or trying to force them to do a certain thing from an administrative view is an ill-founded idea,” Wright said.

Wright affirmed the importance of having spaces for taking breaks and stated that Lerner could be a place to achieve those objectives. Starting this semester, the JED Subcommittee on Social Connectedness will be hosting weekly programming in the lounge, with the next event on Jan. 30 at 5 p.m.